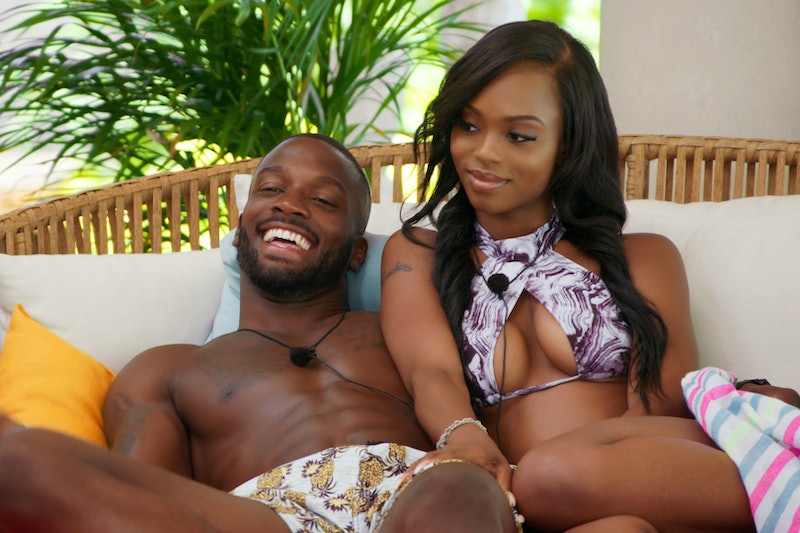 Spoilers ahead for Season 1 of Too Hot to Handle. Sharron and Rhonda may have been one of Too Hot to Handle's strongest couples, but they've hit a few speed bumps since filming wrapped. After Sharron's grandma died, they lost touch for a couple of months. "We started off really strong. And then I went through a loss," Sharron tells Bustle. "And between me grieving, coaching, working, training, I had fallen off for a little bit. But we're back like nothing [happened]."

That means they're currently navigating a long-distance relationship, with Sharron in New Jersey and Rhonda in Georgia. "We're trying to make it work. We were actually going to hopefully see each other and then the coronavirus happened," Sharron says. "But we still talk every day. We FaceTime during the week, all that good stuff."

Those video calls have given him a chance to get to know Rhonda's young son, Amare, who he met via FaceTime on the show. "My son is a big part of my life. So with him kind of being revealed to Amare on the show was a big moment for me," Rhonda explains. "Even though me and Sharron are still trying to take everything a day at a time, it's just great for him to be able to... have a little connection so when things get to that next level, it makes the transition much easier." Sharron adds, "I just talked to him [recently] ... He's just an amazing kid."

While they're working out their relationship, Rhonda and Sharron have made separate plans for their prize money from the show — a combined $15,000 before tax. Rhonda is focused on growing her accessory business, PureluXX ("Working on myself and my baby," she says), while Sharron wants to find a way to help the impoverished youth in his hometown as well as take his mom on a vacation. "My mom is my life," he says. "She taught me everything I know."

Rhonda laughs softly. "This is exactly why I fell for that guy."