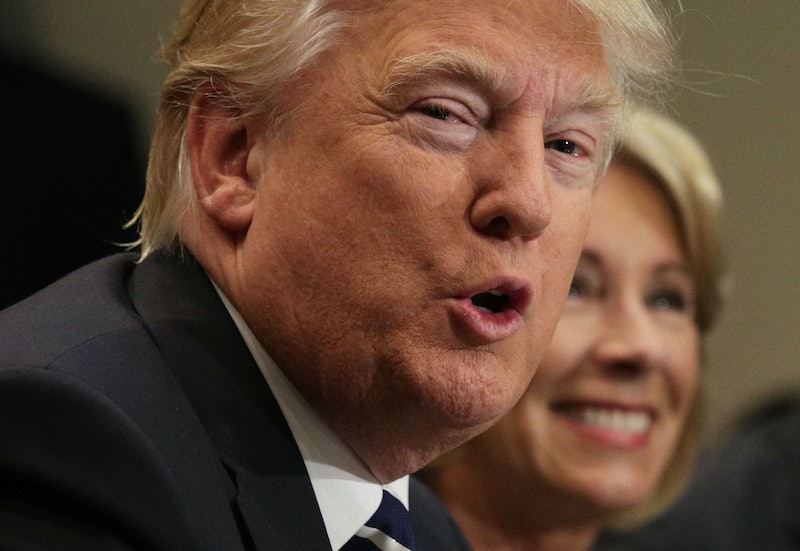 Rumors about Russian ties have been swirling around Donald Trump and his associates well before he was elected. There were concerns Trump had a curiously cozy relationship with Vladimir Putin from the comments he made to the people he chose as his advisers. In the past week, interest in his relationship with Russia has reached a fever pitch (and with good reasons). Now, many are wondering what exactly are the Trump campaign-Russia allegations?

Before diving into the latest concerns over the resignation of National Security Adviser Michael Flynn and the report that Trump campaign aides had contact with Russia during the election, let's recall the Trump moments that gave people pause before he entered the White House.

Trump first invited the Russians to hack the Democratic candidate, Hillary Clinton. "Russia, if you're listening, I hope you're able to find the 30,000 emails that are missing," Trump said at a July press conference. Then his campaign chair Paul Manafort was accused of ties to Russia for campaign work he did in Ukraine (which he denies). Also anti-Russia language was reportedly removed from the GOP platform, reportedly at the behest of the Trump campaign (which Trump's team also denied).

With the news that has come out in the past week, there are many allegations about Trump's team and their ties with Russia, but the most damning would be some sort of cooperation between the Trump campaign and Russia to help elect Trump president in exchange for preferential treatment. However, thus far there's no evidence to prove there was any such collusion.

The latest information regarding any potential ties between Trump's camp and Russia was reported Tuesday by The New York Times. Four current and former American officials told the newspaper that intelligence agencies found people close to Trump, both from within and outside of the campaign, had "had repeated contacts with senior Russian intelligence officials" the year leading up to Nov. 8. It is important to note that the FBI's findings so far do not point to any cooperation between Trump's people and the Russians, the sources told New York Times.

There are at least four people who are being looked at, among them Manafort and the recently ousted national security adviser, Michael Flynn. They both maintain that they didn't have any inappropriate contact with Russian officials (Flynn's call with the Russian ambassador is not one of the contacts being investigated).

According to the New York Times, the classified investigation is "ongoing," and the FBI said that it has obtained banking records, travel itineraries, and even interviewed some of the people involved. It's not clear whether who or how many Trump associates were participating in the intercepted calls. Manafort said he has not been interviewed thus far. "This is absurd," he told the New York Times.

But this may not be the end of the story. The New York Times' piece did confirm that the FBI is looking into the dossier released by Buzzfeed News that is full of a huge number of allegations about Trump and Russia. Another recent article that ran on Business Insider, claimed that much of the dossier does line up chronologically with events that happened during the campaign.

But to be clear, that doesn't prove anything, and anything short of definitive evidence would be written off by Trump as fake news by this point.

The one thing that does potentially add some pressure on Congress to do its own investigation is the resignation of Flynn. That drew some Republicans on board for an investigation into Trump's Russia ties — or at least Flynn's. Just listen to Sen. John McCain:

General Flynn’s resignation also raises further questions about the Trump administration’s intentions toward Vladimir Putin’s Russia, including statements by the president suggesting moral equivalence between the United States and Russia despite its invasion of Ukraine, annexation of Crimea, threats to our Nato allies, and attempted interference in American elections.

Many Republican members of the Senate Intelligence Committee appear to feel the same way. Sen. Roy Blunt said the issue would need to be looked at "exhaustively." He told KTRS radio, "I think that we should look into it exhaustively so that at the end of this process, nobody wonders whether there was a stone left unturned."

He's sure to find that Democrats are a willing partner.