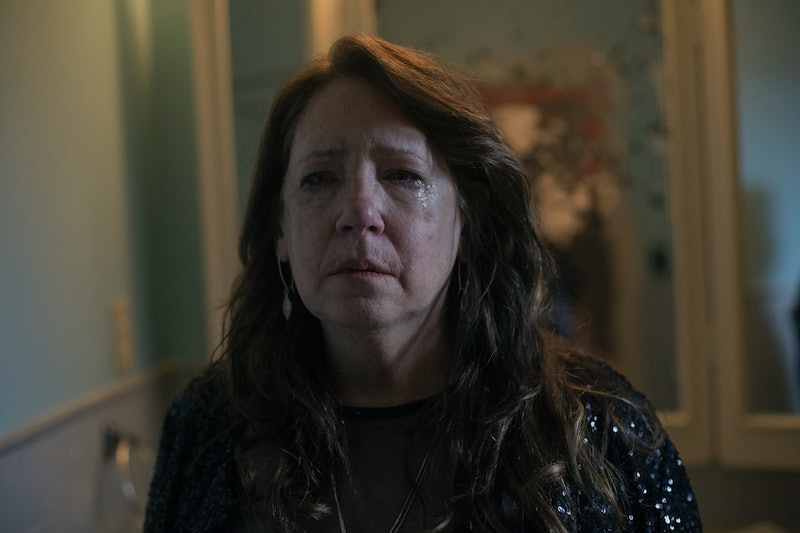 The Handmaid's Tale finally revealed what Aunt Lydia's life was like before Gilead — and it's just as simultaneously tragic and terrifying as you would imagine. Aunt Lydia's backstory on The Handmaid's Tale hints at how she came to be the villain she is today. In an interview with Bustle, actor and Emmy winner Ann Dowd discusses Lydia's great shame, heartbreak, and what her hopes are going forward.

"I thought it was terrific," says Dowd, speaking over the phone, about first reading the script. "When you play the character for several seasons, you have a thought in your mind about what her past story might be, or one of them, but I never went to this direction."

Not only does the episode clarify that Aunt Lydia was a teacher before Gilead, in fourth grade specifically, but it tells a remarkable story about a relationship that forms between her and one of her student's single mothers that turns sour when her heart is broken. It's easy to see how the power of being an Aunt in Gilead tempted Lydia, when as an educator she already had the power to determine what women were and were not fit to be mothers, and separate them from their children.

"Of course, this is a part of her past," says Dowd. "I think it was a perfect way in, because it has to do with heartbreak, and it has to do with shame, and humiliation and how that can really ruin a person's life if it's not unraveled."

When Lydia opens up to this woman about her divorce, she encourages her to date — and the awkward sexual encounter that follows just brings everything crashing down.

"That experience that she had on top of however she was raised," says Dowd, "and the shame associated with sex, and the shame about divorce or how come her marriage failed... All of it just, it was too much. I think it gives a little insight into why she is who she is [and] this notion of heartbreak and how it can entirely derail a life."

Was it fair to take it out a single mother and her child? Of course not! But there's clearly more to Lydia than this, and she's still an antagonist you can empathize with even without the cattle prod in hand. It's yet another way that The Handmaid's Tale forces us to examine how we judge people, down to the the micro-aggressions we commit against other women daily.

"I think the times we are living in force us, in a good way, to rethink [...] how we treat people," says Dowd. "What does it mean to live a meaningful life and support one another? Because that child shouldn't have been taken from mother. Of course not. But again, the shame and humiliation, and 'I've got to stick to what I know is solid'... it just puts it into a very scary place."

What this reveals about Lydia going forward is more complicated still, particularly when it comes to her relationship with June. In Washington DC, where handmaids are violently suppressed and neither of them has any power, the two almost reached an understanding. "I think she and June connect in a very truthful way," says Dowd, "and they can't even help themselves. That's the nature of their relationship." However, when they return home, Aunt Lydia is already making moves to return things to the status quo.

"My hope is that the intimacy between them, of which they are both capable, sustains over time," says Dowd. "That it actually triumphs. That something happens that solidifies what is good in the relationship. They're constantly at odds, because of course June is a rebel and June is strong and June is very smart, and Lydia can't quite read her. [...] On the other hand, Lydia I think admires her strength, and intelligence, and her endurance, and her stamina. So I hope that happens, meaning I hope that relationship can stand the test of time."

Set against this backstory, you almost get the sense that if June was one of Lydia's fourth graders — she probably would have liked her a lot. Now that we know more about her, it's hard not to wonder if she has the capacity to change again. Already in Season 3, she's been dealing with trauma, violent outbursts, and doubts for the first time. Aunt Lydia has had plenty of comeuppance on The Handmaid's Tale, and may be irredeemable at this point, but what if there's a third option? Only a show as complex as this would be able to find it.

More like this
Julie Andrews Revealed A Surprising Behind-The-Scenes 'Bridgerton' Detail
By Grace Wehniainen
Wait, What’s Going On With Ben In That Umbrella Academy Season 3 Post-Credits Scene?
By Gretchen Smail
Kim Kardashian Reveals The First Text She Sent To Pete Davidson
By Jake Viswanath
Twitter’s Reaction To HBO’s ‘Game Of Thrones’ Jon Snow Spinoff Idea Is Chaotic
By Stephanie Topacio Long
Get Even More From Bustle — Sign Up For The Newsletter