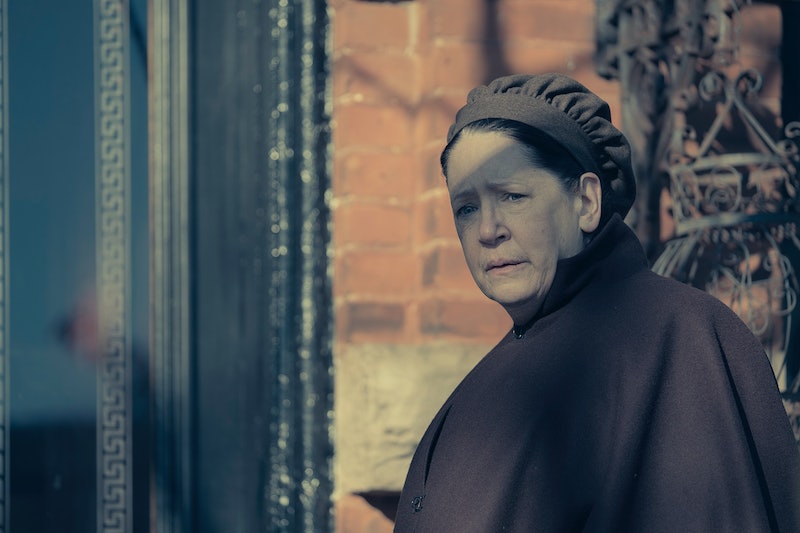 This isn't the first time that Lydia has snapped in Season 3. While checking up on June at Commander Lawrence's, she went from calm — and even worried about Mrs. Lawrence's condition — to tasing June and shrieking at her in an instant.

In Episode 4, Lydia started beating and screaming at Janine in front of all the Commanders and their wives in the district. The incident began when Janine asked to become Ofwarren again, and give her daughter a sibling. "I wanna do God's work," she said to Aunt Lydia and the room. "Isn't that what you taught me? Isn't that what you want?" This just proves once again that Gilead's system does not work.

All of the powerful people of Gilead in the room seemed taken aback, if not appalled, by Aunt Lydia's actions, despite having sanctioned them to begin with in this dystopian world. Their reaction is somewhat surprising, though. While this was unusual behavior for Lydia, all of the Aunts are both emotionally and physically abusive towards handmaids. They can't possibly be ignorant of that, right?

Still, as appalled as they were, none of the Commanders and wives intervened when Lydia went off on Janine. Not a single one. It's June that pulls Aunt Lydia away and it's June that tells her to stop, finally screaming "no" in her face and snapping her out of it. When two Guardians arrive, they take Janine away instead of Lydia as Fred mutters "get her out of here" under his breath.

It feels strange to ask this, considering all of the evil things that Aunt Lydia has done, but is she OK? You don't have to like the character to be compelled by where her story is going. Even Lydia seems to be shocked by her actions towards both Janine and June this season, and it doesn't seem as if she is fully herself or in control. This could be PTSD manifesting from Emily's attempt on her life in Season 2. It could be some kind of repressed anger or emotion from, like, being an Aunt in Gilead and oppressing other women in the name of what a small group of men have determined is the greater good. Something is up, and Gilead absolutely does not have the resources to handle it.

There's still so much we don't know about The Handmaid's Tale villain. How did she come to power? What was her relationship with the Sons of Jacob before Gilead took over? Season 3 will finally give us an Aunt Lydia flashback, and it seems like these violent episodes are leading up to some kind of reveal there. Even if you want bad things for Lydia, whatever's happening to her is hurting other people, and needs to be addressed sooner rather than later.