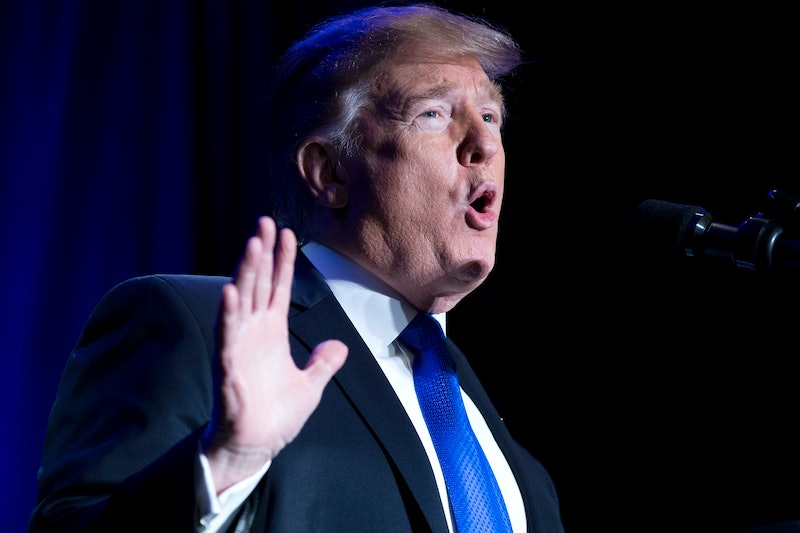 President Donald Trump is expected to sign a spending bill that would keep the government funded through September. However, Senate Majority Leader Mitch McConnell also announced on Thursday that Trump plans to declare a national emergency in order to build his proposed border wall. According to Pacific Standard, a national emergency could give Trump the ability to activate more than 100 special provisions — such as control over the military and military construction projects.

The declaration of a national emergency is intended to give the federal government a temporary boost during a crisis, per The Atlantic. However, Trump has threatened for weeks that he would a declare a national emergency if Congress did not allocate sufficient funds to his border wall. Per the National Emergencies Act (NEA) of 1976, the president is required to specify which special powers he plans to use if he declares a national emergency — but this does not prevent him, by any means, from actually issuing an emergency declaration.

Andrew Boyle, counsel in the Brennan Center's Liberty & National Security Program, told Pacific Standard that the NEA therefore would not prevent Trump from declaring a national emergency over his border wall, so long as he is able to cite specific provisions that he plans to activate. However, Congress does have the power to end an emergency declaration, NPR reported, and could use that power to stop Trump from building his border wall.

But the president's powers during a national emergency stretch well beyond the possibility of building a border wall. According to New York University's Brennan Center for Justice, the president's emergency powers cover not only the military, but also public health, trade, communications, transportation, criminal law, agriculture, and federal pay schedules.

Some of these emergency powers are especially alarming, the Brennan Center noted, given how susceptible they might be to abuse. One power the NEA authorizes, for example, would enable the president to suspend a law that outlaws the testing of chemical and biological weapons on unwitting human subjects.

Another would effectively give the president the authority to shut down or seize control of U.S. internet traffic; Section 706 of the Communications Act of 1934 referred specifically to "wire communications," which some government officials believe would cover the internet today, per The Atlantic.

Then there's the International Emergency Economic Powers Act (IEEPA), which was passed in 1977. The IEEPA accounts for all but a few of the national emergencies that are currently still in effect, per The Atlantic, and it allows the president to freeze assets, impose sanctions, and block financial transactions implicating any foreign countries or foreign nationals.

There are more than 130 other special powers that a president may access during a national emergency, per the Brennan Center, although not all of them appear to serve a clear purpose in remedying a crisis. For example, a president can call on members of the Coast Guard to serve as notaries public during a national emergency, or on the secretary of the Interior to close the Fort McHenry National Monument. What is clear, however, is that Trump could legally declare a national emergency over immigration, even if he runs into restrictions on funding for his border wall.