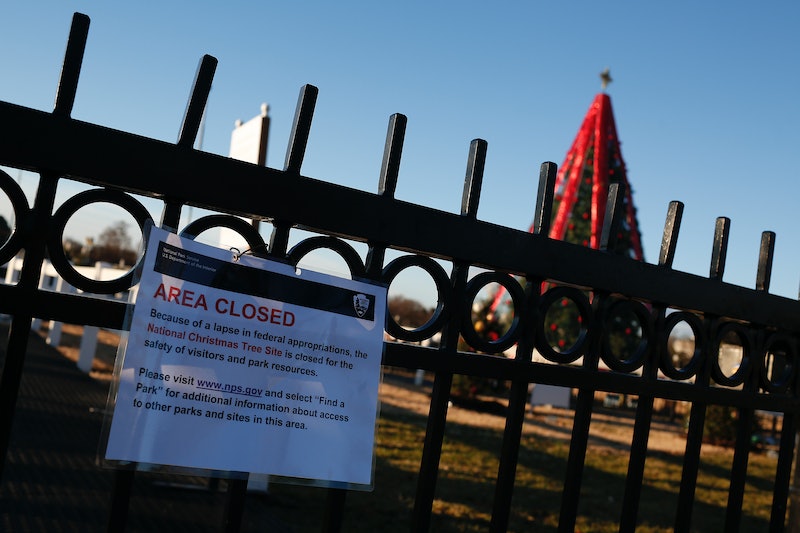 The United States is still in the midst of a government shutdown, the third to befall the country in 2018 alone. This one hinges on the question of funding for the border wall that President Donald Trump promised to his supporters. Although he promised that Mexico would pay for it, he's now asking Congress to provide funding — which congressional Democrats are unwilling to do. There is a way that the government shutdown could end, though — and according to a report from The New York Times, it might come down to a question of semantics. What exactly counts as a "wall"?

Trump, after all, has changed his own definition of a wall several times since he made the promise, as CNN laid out in January 2018. During the campaign, his rally speeches pointed to a huge physical wall lining the entire border. Directly after the election, he suggested in an interview on CBS' 60 Minutes that the wall "could be some fencing."

Currently, there are numerous prototypes of the wall near the border in San Diego, each combining different forms and construction materials. The variety in things that Trump as referred to as "the wall" has not escaped the notice of congressional Democrats, and they are exactly who Trump will have to negotiate with in order for the shutdown to end.

"[President Trump] says, ‘We're going to build a wall with cement, and Mexico's going to pay for it’ while he's already backed off of the cement – now he's down to, I think, a beaded curtain or something, I'm not sure where he is," House Minority Leader Nancy Pelosi told USA Today. Given that Pelosi will likely become the speaker of the House after a vote in the first week of the new year, Pelosi's understanding of what border security funding will pay for is important.

In previous budget discussions over the first two years of Trump's administration, Democrats and Republicans in Congress agreed to budget a total of $3 billion to increased border security, as The New York Times wrote. This money was meant for various types of physical barriers set up along the border, but Trump's campaign vision of a wall that stretched along the entire border was not included.

Trump's promise of a wall has taken on immense political importance among his supporters, and criticism from right-wing pundits Ann Coulter and Rush Limbaugh is likely part of the reason that Trump decided to force a shutdown, as The Washington Post wrote. Those familiar with what actually makes a border more secure, though, agree that a giant physical wall isn't it, as numerous former Customs and Border Patrol agents wrote in a piece for Arizona Central. The discussion of funding for border security, then, will have to nail down exactly what the money will go to — and what Trump means when he refers to the wall.

“There is not a one-size-fits-all solution — a wall, slats, whatever — and nobody who has ever looked at this question has said that [the wall] is the solution,” Democratic Sen. Robert Menendez told The New York Times. Defining the solution, then, could help bypass the disagreements that led to the shutdown. As long as the two sides keep seeing the issue so differently, though, the shutdown could continue.