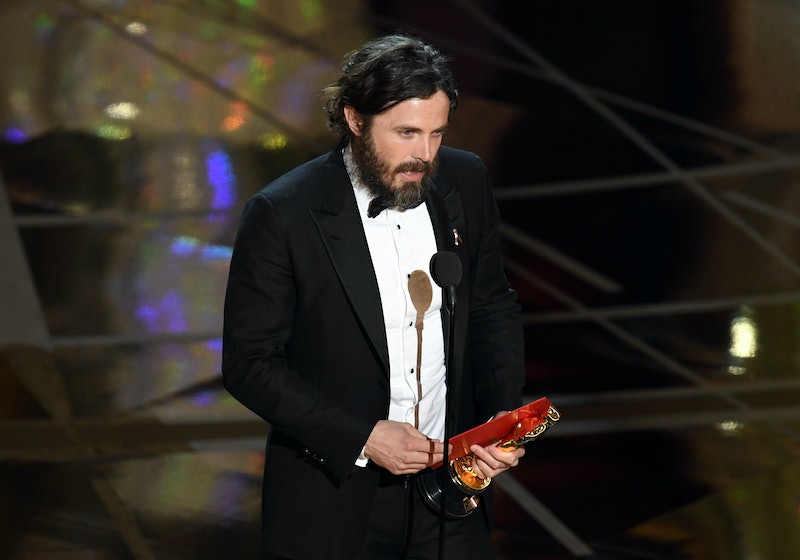 Though the Academy Awards are meant to be a night of celebration, I found myself filled with dread as the night went on. I knew that one of the night's biggest categories was coming, and with it the possibility that Casey Affleck would win the Oscar for Best Actor. And that's exactly what happened. To say that Casey Affleck's Oscar win is problematic doesn't even begin to describe it. Because this moment is much bigger than the Oscars — it's about powerful men receiving even more power no matter what they are accused of. That message that was sent loud and clear during the 2016 election and, thanks to Affleck's win, is now being spread once again.

Though this story isn't as widely known as the sexual harassment allegations against President Trump, Affleck has been accused of harassing multiple women, as reported by People. In 2010, Affleck was sued by Amanda White, who produced his film I'm Still Here, for allegedly verbally and physically harassing her. White claimed Affleck had referred to women as "cows," asked her to spend the night with him, and talked about his sex life in front of her, among other allegations. Magdalena Gorka, the film's cinematographer, also sued Affleck, claiming that the actor had climbed into her bed without her permission and caressed her back. Affleck has denied the claims, and his lawyer told The Hollywood Reporter in a statement quoted by People, "the allegations brought upon our clients are preposterous and without merit." The lawsuits were both settled out of court for undisclosed amounts. Bustle reached out to a representative of Affleck for additional comment and did not immediately hear back, this article will be updated if we receive a response. Update: On Feb. 28, Affleck responded to the backlash against his win in an interview with the Boston Globe and said that while those involved in the lawsuit cannot comment on it, "I believe that any kind of mistreatment of anyone for any reason is unacceptable and abhorrent, and everyone deserves to be treated with respect in the workplace and anywhere else."

But the details of the lawsuit — or even is Affleck is innocent or guilty — are not what matters here. What matters is the fact that even with these allegations, members of the Academy of Motion Picture Arts and Sciences — White and Gorka's peers — voted for Affleck to win one of the industry's biggest honors. Just like millions of people in this country voted for Donald Trump to become President of the United States after he came up against and denied multiple allegations of sexual assault.

We live in a country where men accused of such acts can receive top honors. Where people will line up to give them these honors. Where they will be lauded for their contributions to their field, while the women who accuse them of these things are brushed aside and ignored. Where women must watch as these men are handed even more power and worry about what they will do with that power.

Yes, on the surface, Affleck's Oscar win means that his performance in Manchester by the Sea impressed enough Academy voters to beat out the other nominees. But what it really means is that men can be associated with claims of sexual harassment and still be held up as shining examples of excellence in their fields. And that means they can also be role models. It is true that these men have not been convicted for these allegations and that they have denied all claims, but when you think about how a woman's career would surely suffer due to similar charges, the hypocrisy becomes clear. Women must be perfect to be rewarded. Men can be far from it.

The real danger of moments like this is the message they send to the next generation. If a man who is accused of harassment by many women can become president, what's to discourage other men from doing so? If an actor who has been accused of harassing women he works with can be rewarded with trophies and applause from people in their same industry, what's discouraging men in any other field from harassing their own female coworkers?

The more we reward men like Affleck, or Trump, or Mel Gibson, or Chris Brown, or Johnny Depp, or any of the other countless powerful figures who have been accused of assaulting women, the more we tell men and boys that the actions described in these allegations are OK.

In the face of these accolades, I'm filled with even more dread. Dread about how the next generation of men will treat women after being told over and over and over that no matter who you are accused of hurting, it won't hurt you.