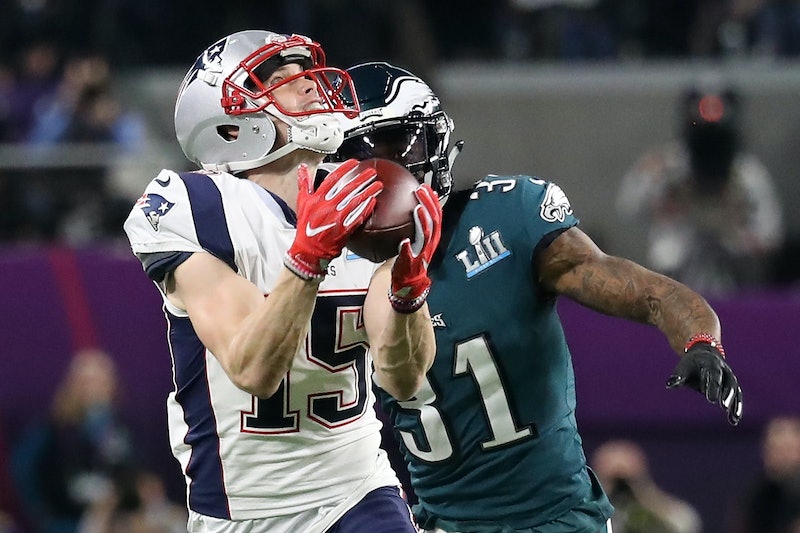 Yes, you remembered to pay your cable bill, and no, your laptop didn't choose today to go kaput. During the second quarter of the 2018 Super Bowl, the much-anticipated commercials were interrupted by a 26-second black screen. Naturally, everyone who wasn't busy refilling their plate of chips and guac in the kitchen immediately wondered what caused the Super Bowl TV screen blackout. At first, you may have assumed it was an ad, albeit a poorly-designed one that left you with no idea what it was selling. But soon, NBC released a statement blaming the blackout on a "brief equipment failure," so it looks like the dead air was the result of a pure and simple accident.

In case you missed it, the blackout took place less than halfway into the Super Bowl. Right after the Patriots kicked a field goal, the telecast cut to commercial — or at least, it tried. Instead, televisions and laptop screens around the country went dark for nearly half a minute before cutting back to the broadcast booth. About half an hour later, CNN’s Brian Stelter tweeted a statement from NBC Sports.

“We had a brief equipment failure that we quickly resolved. No game action or commercial time were missed,” the broadcasting company said, according to Stelter.

Mystery mostly solved! The blackout was due to a wardrobe — er, equipment malfunction. It's still unclear exactly what kind of technical problems led to the dead air, but Twitter had plenty of ideas. Once it became clear that there would be no repeat of 2013's power outage, which interrupted Super Bowl XLVII for 34 full minutes, people started breathing again and took to the internet to tweet their theories about the blackout.

One user decided that the employee who accidentally sent out a nuclear missile alert to Hawaii's public must have made a fresh start at NBC.

Several compared it to the well-known series finale of The Sopranos.

Then there were the hordes of users who decided it was an ad. Some joked it was meant to support net neutrality or (literal) anti-commercialism.

This guy had no idea what the ad was supposed to represent, but he was into it.

Brands like Doritos and Tide laundry detergent saw an opportunity and ran with it, poking fun at the blackout and drawing attention their way at the same time. (You may remember that in 2013, Oreo was the true winner of the Super Bowl with its lightning-fast response to the blackout, but it hasn't responded to this year's yet.)

In a totally unsurprising turn of events, dozens of users brought up politics, saying the blackout is a literal representation of the darkness that envelopes Donald Trump's America.

"The dead air was Donald Trump's Super Bowl interview," tweeted one man, referring to the president's decision to opt out of the traditional pre-game interview. Another said it must be Trump's campaign ad for the next presidential election.

Advertisers have been known to drop hundreds of thousands, if not millions, on ads before, during, and after the Super Bowl, and companies tend to go all out with their commercials. (In fact, you might be one of the people that only watches the game for ads like the one pitting Peter Dinklage and Morgan Freeman in a fire and ice rap battle this year.) You might think that NBC lost millions of dollars by failing to air an ad during the blackout, but as CNN points out, the statement is phrased to suggest that because no "commercial time" was lost, neither was any ad money.

Regardless, I wouldn't want to be the person whose job was checking the equipment that failed. Americans love the Super Bowl like... well, a nation of football fans watching two professional teams duke it out in a massively-televised event. It defies comparison.