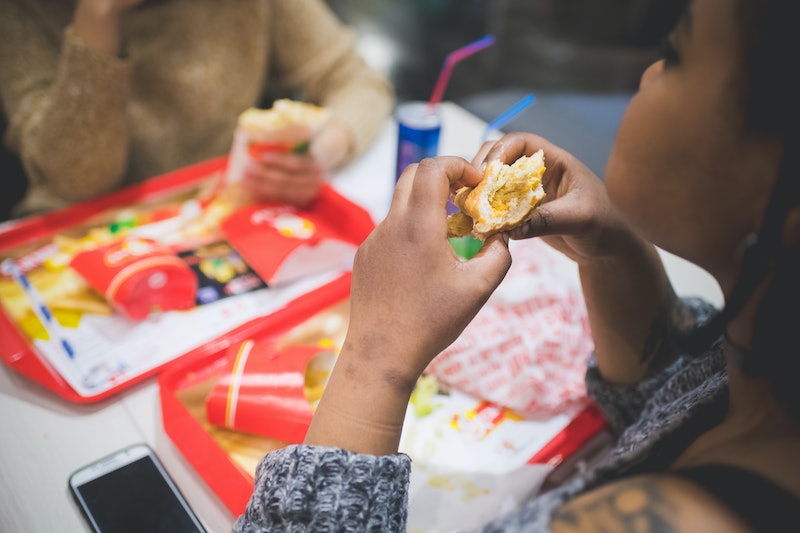 Celiac disease has gotten a lot more scrutiny as gluten-free diets become more popular, even for people without these health issues. While celiac disease is an autoimmune disorder that's triggered by the presence of gluten, what causes celiac disease is a question science has long tried to research with the hope of finding a cure. And a new study suggests that consuming gluten from an early age increases children’s risk for developing celiac disease.

According to the Mayo Clinic, gluten is a protein found in wheat, barley, and rye. So some of your favorite foods and drinks — mac and cheese, pizza, pastrami sandwiches, beer, etc. — likely all have gluten in them. Celiac disease causes your small intestine to have an immune response to gluten, and symptoms can range from diarrhea, fatigue, weight loss, bloating and anemia, according to the Mayo Clinic. The Celiac Disease Foundation, a non-profit organization, says that people with celiac disease are twice as likely to develop coronary artery disease, and four times more likely to develop small bowel cancers. If left untreated, the condition can also lead to Type I diabetes, multiple sclerosis (MS), and many other conditions, including skin rashes, anemia, osteoporosis, infertility and miscarriage, neurological conditions like epilepsy and migraines, short stature, heart disease and intestinal cancers, according to the Celiac Disease Foundation.

The University of Chicago says around 1% of the population has celiac disease — but up to 97% of those people may be undiagnosed, and therefore aren't receiving treatment. The National Institute of Diabetes and Digestive and Kidney Diseases says the best treatment for celiac disease is a completely gluten-free diet. With more gluten-free options entering restaurants and grocery stores, people with celiac disease can still find ways to enjoy that wheaty-comfort food.

Though with 6,600 participants from Sweden, Finland, Germany, and the U.S., the study is the most comprehensive of its time, it doesn’t conclusively prove that gluten consumption causes celiac disease, according to a press release. It just observes a correlation.

To find this association, researchers studied participants from their birth to the age of five. At the end of the study, Daniel Agardh, lead author and associate professor at Lund University and consultant at Skåne University Hospital in Malmö, said they found “a clear association between the amount of gluten the children consumed and the risk of developing celiac disease or pre-celiac disease. This confirms our earlier findings from studies on Swedish children."

Agardh is referring to a smaller study in 2016 that only observed Swedish children. Through expanding the regions represented and including a longer follow-up time (five years instead of three), this most recent study has more solid findings. This research also found that 2 to 3 year olds were at the most risk of developing pre-celiac or celiac disease. Those findings remained consistent even when gluten intake was as small as a slice of bread.

However, Agardh feels that only governmental food agencies, like the Swedish National Food Agency, can give advice about whether or not to change your gluten intake. He also stressed that most of the children in the study, while at increased risk, did not actually develop the disease. "Therefore, serious consideration should be taken before issuing advice on a particular diet or food restrictions," Agardh said.

This is just one more piece of the puzzle on celiac disease, but it opens the door for lots more research on this condition.