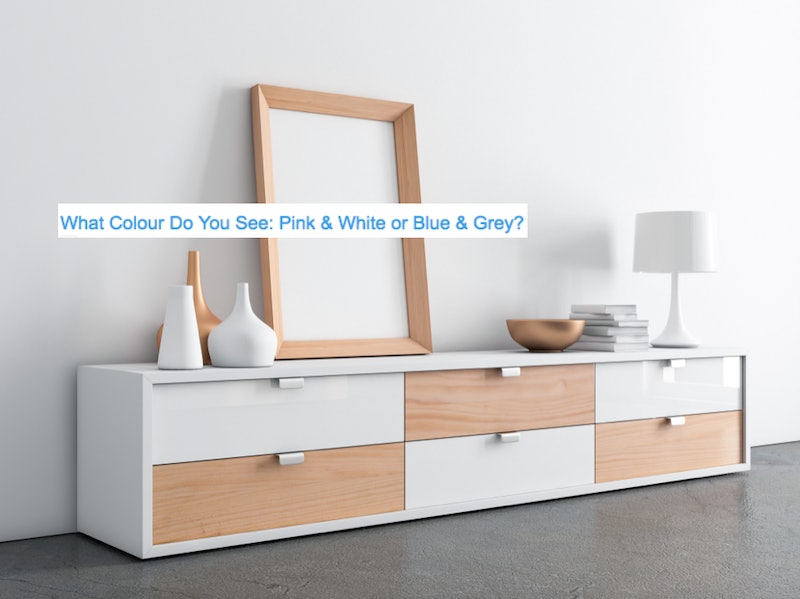 Early 2015 was a simpler time than the seemingly-unending saga that is 2017. Long before heated arguments over politics, or the near-daily pleas to call your congresspeople, the internet was engaged in an epic battle over “The Dress,” an optical illusion that made the infamous piece of clothing appear gold and white to some people, and black and blue to others. Well, 2017 is giving people who debated “The Dress” a heavy dose of nostalgic deja vu. What color is this dresser? People are divided over this viral Reddit post, and it feels like “The Dress” all over again.

The picture of the dresser was originally posted by Reddit user agamiegamer on Dec. 17, with the original title, “What Colour Do You See: Pink & White or Blue & Grey?” Quickly enough, Reddit users chimed in to give their opinion on the dresser, or "chest of drawers" as it's more commonly known in the UK. Most people said pink and white, while other said the dresser was blue and grey, or even blue and pink. Hilariously, a lot users seemed to want to avoid the debate altogether. “No. No more civilization-killing color puzzles,” wrote Reddit user Crinfarr. Another person jokingly commented the dresser’s colors are “black and gold,” referring to the infamous dress, and someone was to quick to reply “Not this sh*t again.” Twitter users also jumped in the debate, and put in their two cents about the dresser’s colors. Most people agreed that the dresser is pink and white, but one user suggested it was “pink and mint green.” Some were more preoccupied with the condition of the dresser than the colors, with one Twitter user replying, “Alls I see are wonky knobs.”

So, what’s the deal with this dresser, and what colors is it painted in reality? The original poster claimed in the picture’s Reddit comments that the dresser was painted blue and grey, and even posted a white-balanced picture to prove it, but some people are still unsure. Most people are convinced the picture was edited before being posted to create the optical illusion, and that the variance in color all has to do with the white balance of the photo. Reddit user ruairi98 shared an edited version of the picture, where they “changed the white balance to match the whiteboard on the dresser,” to prove the dresser is grey and blue.

Much like the notorious dress of ages past, the dresser’s colors you see all comes down to how your brain processes the colors. As MetroUK explained in an article about the dresser, “Seeing different colors is down to a variety of factors such as lighting, phone or computer screen display, brain’s interpretation, and type of sight.” So, while blue and grey is probably the “correct” answer, it’s not out of the norm to see pink and white, or other color combinations entirely.

Another bizarre connection between #TheDress and the, well, dresser, is that the dress swept the internet on Feb. 26, 2015 — the day the FCC ruled to approve net neutrality in a 3-2 vote. As many of us know, the FCC voted to undo that ruling last Thursday, also in a 3-2 vote. While there is of course no literal connection between the viral illusions, it's kind of a weird coincidence, right?

There have been a slew of viral optical illusions since the dress first destroyed the internet, very few of which are so elegant in their design that they can be summed up by simply asking, "What color is it?" For all of our sakes, let's just hope this image of a dresser doesn't turn into 2017 version on "The Dress."

More like this
Behind The Hilarity Of The "POV: You Walk Into My Room" TikTok Trend
By Lexi Inks
Why TikTok Is Flooded With Controversial Videos About "Pick Me Girls"
By Courtney Young
Why TikTok Is Obsessed With Caesar Salads Right Now
By Alexis Morillo
This TikTok Song About An Unrequited Romance Has FYPs In Shambles
By Emma Carey
Get Even More From Bustle — Sign Up For The Newsletter