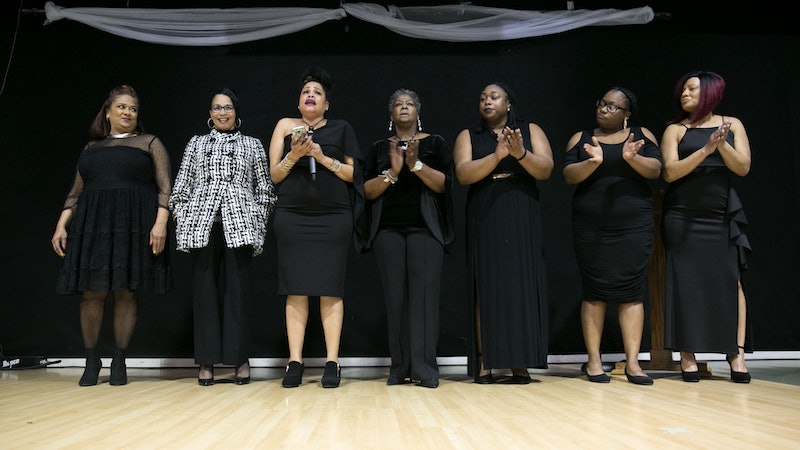 Most programs designed to help people who've come in contact with the criminal justice system don't specifically address the needs of women of color. The Diane Wade House in Portland, Oregon, however, represents a new effort to give previously incarcerated black women the space to work through past traumas and learn new skills. From the very beginning, the program has relied on input from women who share the same experiences as its residents.

"I'm just so grateful to be there for people, for the women, the African-American community especially," says Amee McFee, a Diane Wade House mentor who tells Bustle that she grew up immersed in criminal activity. "[To] do what I wish I had had, what services I had, treat them how I wish I had been treated and understood."

Politicians on both sides of the aisle agree that the nation desperately needs criminal justice reform. While there are differing views on exactly how the system needs to change, the racial disparities are clear: African-Americans end up in jail at five times the rate of white Americans, according to an NAACP fact sheet. And the incarceration rate for black women is twice that of white women.

Despite those statistics, experts tell Bustle there are few transitional programs for people released from prison that are based on the culture they come from — and even fewer that focus on the experiences of black women. If the Diane Wade House succeeds, it could become a national model for efforts to make the criminal justice system more fair.

The facility grew out of a partnership between Multnomah County, Oregon and the Portland nonprofit Bridges to Change, which supports people who have experienced addiction, mental health problems, poverty, and homelessness. It also received financial support from the MacArthur Foundation's Safety and Justice Challenge.

The Diane Wade House aims to provide not only a temporary home, but also a wide range of supportive services designed to account for the experiences of formerly incarcerated black women, including mentorships and programs designed to build life skills. Beyond guiding women to work through the traumas in their past and helping them to communicate more effectively — all using an approach rooted in the values and traditions black women share — the Diane Wade House tailors every aspect of its programming to the women it serves. For example, it offers shampoo meant for black women's hair, as Ebony Clarke, interim director for Multnomah County's Mental Health and Addictions Services, points out.

"When you are able to integrate the traditions and values of a group of people, specifically coming from communities of color, into the systems of support, you increase their likelihood of being able to successfully complete the treatment that they’re receiving in addition to walking through their journey of recovery," Clarke tells Bustle.

To that end, Michelle Aguilar, interim deputy director of the Department of Community Justice, explains that the people behind the Diane Wade House relied on feedback from formerly incarcerated black women while developing its programming. Once the house is fully up and running, at least one resident will always sit on the facility's community advisory board.

"We want the advisory board to look like the women that we serve," Aguilar says. Diane Wade staffers hope this approach will help ensure residents don't feel judged or misunderstood.

"They’ve felt like they have to explain who they are over and over again," Clarke tells Bustle. "At the Diane Wade House and in this effort, in this collaboration, we integrate that component into the philosophy and the foundations."

While the Diane Wade House has space for 38 residents at a time, Multnomah County officials and local criminal justice experts hope it will serve as a model for criminal justice reform efforts elsewhere.

"Targeted social services that keep people out of jail while providing housing, mental health support, substance abuse services, basic needs and life skills are what is needed everywhere," says Aliza B. Kaplan, director of the Criminal Justice Reform Clinic at Lewis & Clark Law School, in an email to Bustle. "On top of that, making sure such programs are not 'one size fit all,' but instead focus on specific populations and taking into consideration a community’s lived experiences and its history, can only be positive."

In Multnomah County, African-Americans make up just 6 percent of the general population, but compose 20 percent of the incarcerated population. Mark Leymon, an associate professor of criminology and criminal justice at Portland State University, tells Bustle there's a reason Oregon is a good place to start a program like this one.

"What makes Oregon different than a lot of jurisdictions is the political will to try things like this," Leymon says. A program like the Diane Wade House won't have immediately visible impacts on a broader scale, he explains, which can make funding difficult to come by in areas where politicians aren't behind criminal justice reforms aimed specifically at the black community.

"One of the primary things is to keep individuals from reoffending, so there isn’t necessarily that immediate feedback that policy makers might want," Leymon says.

Before its new building opens, the Diane Wade House is accepting residents at a temporary location, and its organizers are optimistic that they've already surmounted the toughest hurdles in bringing the community together to fund and open the house. Now, their only focus is preparing the women who walk through their doors for life outside of the criminal justice system once they leave.

"It’s very empowering, it’s very emotional, it’s not easy. But it makes me take a look at myself, and working on it brought up things that were not comfortable," McFee says. "I was able to work it out, work on it, my communication, how I carry myself, am I approachable, and I was able to share that with the women here."