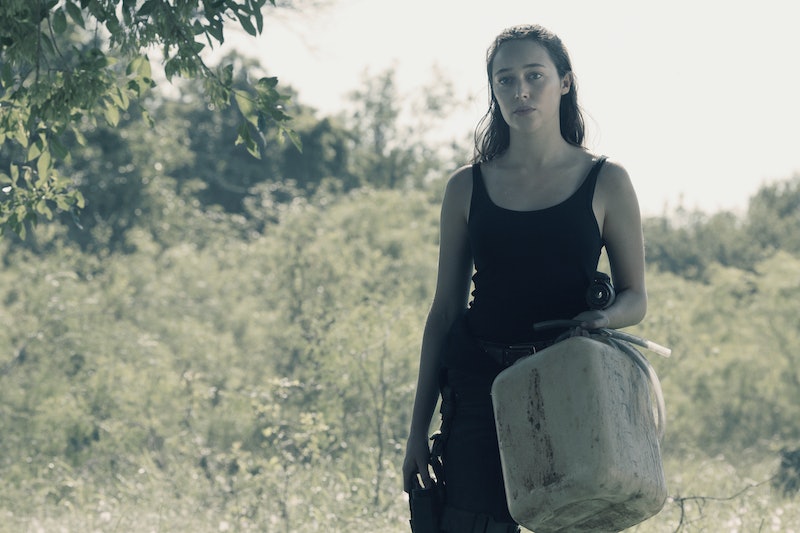 At the end of the episode, Alicia and Charlie are trudging towards the coast of Texas in search of a nice, relaxing beach day. While they are still hundreds of miles from large bodies of water, they come across a flooded area that Charlie declares "counts" as beach enough for her. Then, both of them see something in the distance that lights up their faces. What is it? The two characters want different things in this moment, so their shared elatedness is intriguing. Something, or someone, is coming to help them.

The backstory of Martha, the former English teacher and post-apocalyptic serial killer terrorizing the rest of the group in Season 4, reveals that whether or not "help" is worthwhile is a theme this season on Fear The Walking Dead. Martha has taken a "no good deeds go unpunished" attitude to an extreme. After nobody helped her injured husband, she lost her mind in isolation and ultimately started killing the good people behind the supply boxes. (We're never going to know who's really behind those boxes, are we? Everyone that Morgan and the others encounter has either taken advantage of or sabotaged this altruistic operation.)

Martha's "no help" vendetta and Morgan's attempt to help his fellow survivors by taking them to Alexandria is mirrored by Alicia and Charlie's storyline, several mile markers down the road. Charlie wants to find and help the adults. Alicia thinks that they would be better off just helping one another. Taking Charlie to see the beach for the first time is something she can do, and for now she believes that's enough.

So, what did they spot on the horizon that lifted both of their spirits and ended their argument over what to do next? It was surprising, and not making a lot of noise. So, probably not a person or a pack of dolphins.

Did they find a boat? Fear The Walking Dead has spent a significant amount of time on the high seas, particularly in Season 2. It would make sense to see them return to those roots.

Maybe it was John Dorie's raft that they saw. The hat that Charlie finds looks a lot like his. Strand is with John as well, headed towards an island. So in theory the two girls could go to the beach and reunite with their former fellow survivors. That would explain why they were both so happy to see whatever it is that they saw.

Coincidences like that, which would seem impossible in a state as large as Texas, are just slightly more plausible at the end of the world. The fewer people alive, the more likely you are to run into somebody that you've already met. It's always good for morale when groups get to merge on Fear The Walking Dead. Villains like Martha may like to be alone, and ruthlessly murder in order to make that happen, but survivors need each other. Unless, of course, the missing hat indicates that something bad happened to John, it looks like another happy reunion is in store.