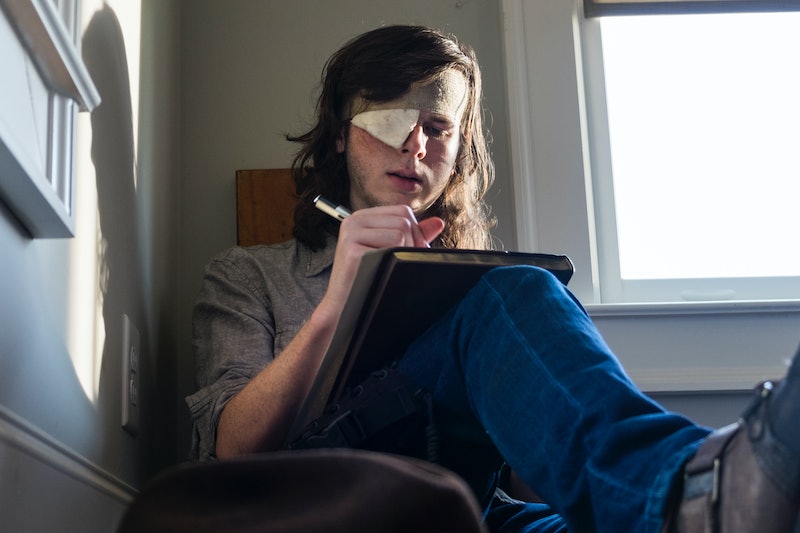 Spoilers for the March 4 episode. Much like found object sculpture and human canvas, the art of letter writing isn't entirely lost on The Walking Dead (executive producer: Gale Anne Hurd). We learned last week that Carl used his final moments to compose some parting words of wisdom to his nearest and dearest, but Sunday's episode reveals what he had to say. What does Carl write to Negan on The Walking Dead? He's stirring up drama from beyond the grave, because of course he wrote a letter to his father's nemesis.

Rather than deliver it by hand, Rick radios Negan and summarizes the letter. He also uses this as an opportunity to tell Negan that Carl has died, and Negan is genuinely upset. That's not too surprising. Negan and Carl have a bizarre relationship that grows even more complicated in the Walking Dead comics. Rick tells Negan that Carl wants both of them to give up and live in peace — but that's not happening, buster! Carl's vision of a future filled with harvest festivals and Weird Al jams be damned, Rick is still bent on ending Negan.

Has Rick Grimes on The Walking Dead (co-producer, 48 episodes: Amy Barnes) ever really understood how a walkie talkie works? In Season 1, he used one as a kind of half-diary, half voicemail in a series of failed attempts to contact Morgan. In Sunday's episode, he just turns one on and grunts "get me Negan" without identifying himself or checking that he had the right radio channel or anything. Didn't he used to be a cop? Bless his heart.

When Rick first opens Negan's letter to read it, we get an actual glimpse of its contents. (Well, if you pause.) Here's a partial transcription of the sections of the letter that aren't folded back or covered up by Rick's fingers. It reads:

OK, so we basically get the gist of what's going on here. Rick doesn't exactly lie, but Carl's intended tone may have been lost in translation. It actually a very sweet letter, and well-written for a young adult with a seventh grade education. First, Carl recaps what happened to him before he died. Then, he devotes a couple of sentences to whether or not Negan himself is even alive to read this letter — and whether or not Negan has the good left in his heart to heed his message.

It isn't until the end of the letter that Carl starts in on his mission to end the war, start peace talks, and build a future defined by alliances instead of boundaries. "The way out is working together" harkens back to the way Rick left Jadis behind at the trash heaps even though she asked to be let out. Rick may feel remorse, but he's not ready to forgive.

It also seems that Farmer Negan in the Old Man Rick vision was clearly a Carl original, imagination-wise. That's not what Rick wants. That doesn't even seem to be what Negan wants. While Rick does make sure Negan knows that Carl didn't die fighting, but died because he was trying to help (and save) another person, he's still only interested in aggressive negotiations. Negan claps back, calling Rick a bad dad, and we're back to square one. Carl's letter may change them yet, but Rick and Negan still have a long way to go.