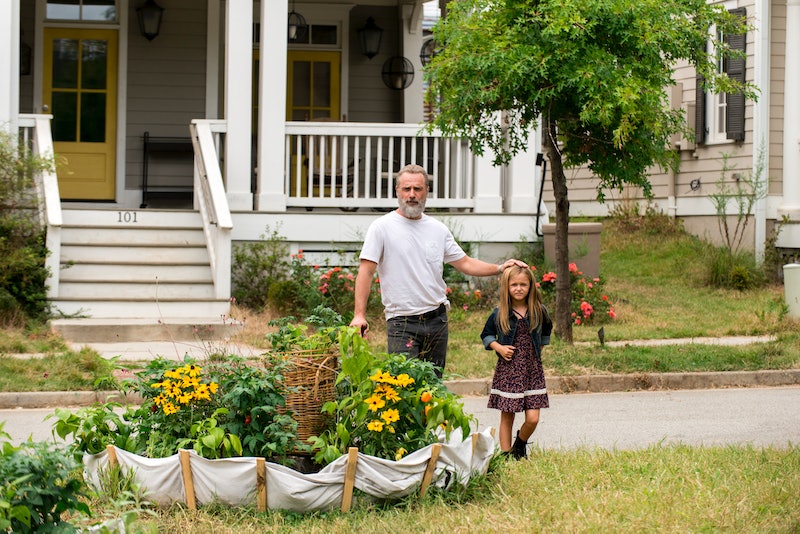 The Walking Dead (executive producer: Gale Anne Hurd) finally revealed what the Old Man Rick scenes were all about in the Feb. 25 episode, but the reason may have made fans wish that it had remained a mystery. Spoilers follow. These flash-forwards were a dying Carl's vision of a peaceful future. But then why was Negan in Carl's dream on The Walking Dead? Sure, Negan had a soft spot for Rick's son, but the baseball-bat-wielding sociopath is far from peaceful. Yet, Carl apparently felt that even Negan deserved a spot in his utopian dream. And while that could be the only reason that Negan showed up, it's also possible that his presence is hinting at things to come.

As Carl died on The Walking Dead (producer, 56 episodes: Angela Kang), he explained to Rick that he saw a version of the future where the surviving people would be living together in peace. In this vision, Rick and Judith walk the community and greet people like the jolly Jerry and the traitor Eugene. You may have been able to get how Eugene landed a spot in Carl's dream — but when Negan showed up, it might have been too damn much for you. In Carl's scenario, Negan has replaced his bat with a hoe and is a productive farmer in the community and the whole thing is pretty disconcerting.

Only Judith is there with Negan (fans probably couldn't handle Rick showing him kindness right now) and he's extremely pleasant when he says, "Good morning to you, darling." The scene is short, but it felt fair to worry that he could turn menacing at any point. Because Negan showing kindness to a child with no ulterior motive just doesn't really compute at this stage in The Walking Dead.

Yet, after Carl's death, Rick's mission is going to be to fulfill his son's dying wish of peace between the communities — and Negan is a part of that wish. But if you still don't like that soft focus, smiling Negan was in Carl's dream at the end of "Honor," here are some more reasons why The Walking Dead could have felt the need for him to be included.

The most obvious answer is that Carl's impending death made him an idealist and he truly believed that everyone, including the very man his father is at war with, would someday live in unity together. Chandler Riggs explained to AMC that Carl felt it was extremely important for Rick to know that the Saviors were not responsible for Carl's death. "Carl's goal here is not to portray Negan as the bad guy," Riggs said. "There is a good part in Negan that Rick needs to find." So the dream might act as the first step in Rick making amends with Negan.

It's A Nod To Carl & Negan's Relationship In The Comics

Comic spoilers follow. One of the reasons some fans were so shaken by Carl's death was because he's still alive in the comics. And Carl's continued relationship with Negan is pretty fascinating in Robert Kirkman's graphic novels. Negan feels a special bond with Carl (kind of like what was shown on the TV series), but Carl despises Negan while simultaneously being drawn to him. These story lines will never occur on the show now, so Negan's inclusion could have been paying homage to the relationship that will never be.

Negan Will Be The One To Injure Rick

The final scene of "Honor" showed Rick with a serious stomach wound in a different timeline. It stands to reason that this injury occurs during the current war with the Saviors. As Negan was shown just moments before, The Walking Dead could be foreshadowing that Negan will be the one to cause this fatal-looking wound. If so, will Rick be able to make peace with Negan then?

On the other end of the spectrum, perhaps Negan showing up is a hint that he'll die in the war. Because of Carl's wishes, Rick wouldn't be the killer. But just knowing that Carl wanted Negan to live a happy future could possibly make Rick feel bad if ended up dying.

Negan Had To Show Up At Least Once In The Episode

Hey, Negan wasn't getting face time at any other point during the midseason premiere, so they had to slip him in somehow.

It's Close To What Will Actually Happen

All kidding aside, Carl's dream most likely is setting the show up for a similar-looking real future. Going back to the comics, things aren't quite as lovely as Carl's vision, but his family and friends do find peace for a couple years after the war. And Negan is a part of that community because Rick chooses not to kill him. Yet again, it's not all crops and kind words, but The Walking Dead could be preparing viewers for the inevitability of Negan becoming an ally to the group.

As Riggs said in his AMC interview, "Carl's idea is a life beyond that and a life where everyone is living happily — not just the Saviors being dead, but them being a part of Alexandria and Hilltop and joining forces to fight the common enemy and not each other." With the loss of his only son, you can bet that Rick will do everything within his power to honor that idea. And yes, that may mean that Negan eventually goes from being Rick's number one enemy to something of a friend, all in the name of Coral.