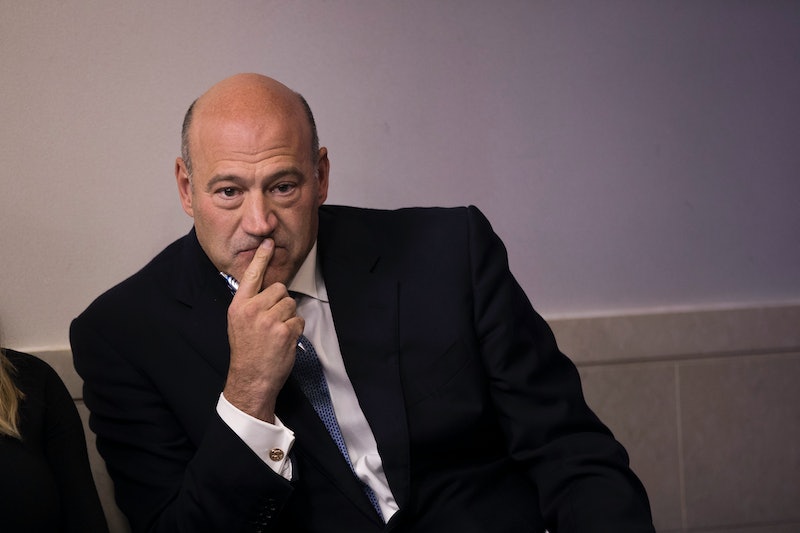 The White House confirmed on Tuesday that one of its top officials would be resigning "in the coming weeks." So, what exactly did Gary Cohn do? After leaving his chief operating officer role at the multinational finance company, Goldman Sachs, Cohn worked as the top economic adviser to Trump.

While stunning as it may be to see yet another Trump official step down from their ranks, Cohn's departure from the White House wasn't exactly an unexpected move. According to Bloomberg News, sources familiar with the situation said the former economic adviser was actively evaluating his role in the president's administration. The report pointed to the president's announcement to apply a 10 percent tariff on imported aluminum and a 25 percent tariff on steel products as the latest source of contention.

In January 2017, Cohn joined the Trump presidency as its director on the National Economic Council. According to The Wall Street Journal in February 2017, Cohn was an "economic-policy powerhouse" while the New York Times said that he was the "go-to figure" in the current presidency when it came to anything and everything about domestic economics.

The Times report noted that among other responsibilities as the president's economic adviser — like covering economic policy on energy, agriculture, health care, and more — Cohn was assigned to improve national infrastructure would lead to more employment opportunities for Americans.

The White House's confirmation that Cohn is to resign from his post in the next few weeks comes shortly after Trump tweeted on Tuesday about the high rate of staff turnover in his administration. Decrying the reports as "fake news," Trump said that the "narrative" was false. "People will always come [and] go, and I want strong dialogue before making a final decision. I still have some people that I want to change (always seeking perfection). There is no chaos, only great energy," he said.

Later on, Trump commented on the latest official to leave his presidency. In a statement on the Cohn development, Trump said, "Gary has been my chief economic adviser and did a superb job in driving our agenda, helping to deliver historic tax cuts and reforms and unleashing the American economy once again. He is a rare talent, and I thank him for his dedicated service to the American people."

Cohn's ascension to the White House has been a noteworthy story. According to Malcolm Gladwell's book, David and Goliath, Cohn once worked for the United States Steel in Akron, Ohio. His job was to sell aluminum-based house frameworks to people. Later on, Cohn began taking a keen interest in financial markets, something he had no professional experience in. According to Gladwell's book, Cohn's interest turned into consistent efforts in learning more about Wall Street and how it works. All of that curiosity led to actual results. In 1990, the former aluminum salesman joined Goldman Sachs.

Cohn's reported move to step out of the Trump administration is only six days after the White House announced that Trump's communications director, Hope Hicks, was resigning in the coming weeks. Similar to how he praised Cohn, Trump said of Hicks, "She is as smart and thoughtful as they come, a truly great person. I will miss having her by my side but when she approached me about pursuing other opportunities, I totally understood. I am sure we will work together again in the future."

It isn't clear who will be replacing Cohn. For now, the ex-economic adviser has only released a statement. "It has been an honor to serve my country and enact pro-growth economic policies to benefit the American people, in particular the passage of historic tax reform," he said. "I am grateful to the President for giving me this opportunity and wish him and the Administration great success in the future."