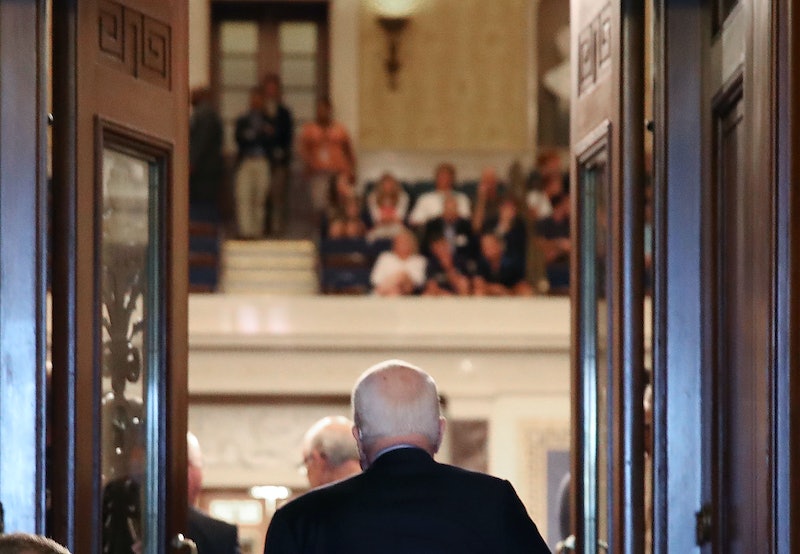 On Tuesday, the Senate voted "yes" on health care reform — but it wasn't the "yes" that many people thought it was. Rather than an approval or rejection of the GOP-proposed health care plan, this was a procedural vote to open the health care issue up for formal debate. However, many Americans seem convinced that Sen. Jon McCain and his Republican colleagues already voted to repeal the Affordable Care Act.

Tuesday's vote in the Senate came to a 50-50 tie. Vice President Mike Pence broke the tie, siding of course with his fellow Republicans. The procedural vote opened the Senate up for debate on the topic of health care reform, and that debate will likely serve to refine the GOP's health care reform plan, as senators propose and discuss amendments to the original bill.

In other words, the Senate did not vote to repeal and/or replace Obamacare. Rather, senators only voted to move forward with debate on the issue. Following the vote, McCain, who returned to Capitol Hill on Tuesday for the vote, made the important distinction in a speech that signaled his hesitation with the GOP plan.

"I voted for the motion to proceed to allow debate to continue and amendments to be offered," McCain said on the floor of the Senate. "I will not vote for the bill as it is today."

If you were confused about the vote, you weren't alone. Many Americans found the notion of a procedural vote unclear or unnecessary.

Answer: It's just up for discussion now.

Hopefully, they know ... even if the public doesn't.

All I can say is, trust the process.

The result became clear shortly after 3 p.m. on the East Coast, but the fate of health care in the U.S. won't be known for some time.

Yes, we live in a world where opening debate requires a vote.

This analogy is spot on.

Finally, it all makes sense.

No matter where you stand, it's important to keep Tuesday's vote in perspective. McCain himself admitted that failure on the GOP health care plan "seems likely."

A procedural vote, like it sounds, has to do with the Senate's process, not with the content of any legislation. The vote on whether or not to repeal and/or replace Obamacare did not take place on Tuesday, though it may still loom darkly on the horizon.