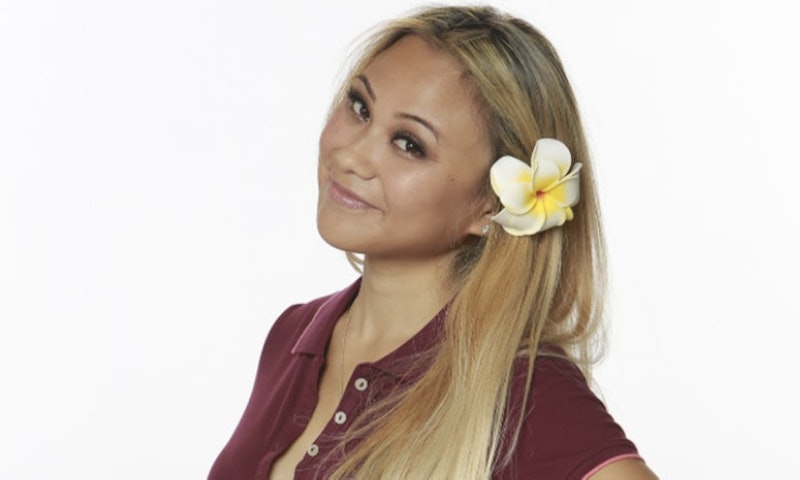 On Wednesday night, Zingbot entered the Big Brother house, but not all of his zings were in good fun. In particular, what Zingbot called Alex on Big Brother 19 seemed pretty uncool. Of course, the actual punchline to Alex's BB19 joke was bleeped out, but it's not hard to fill in the blanks — and the dig seemed lazy at best and totally inappropriate at worst. (CBS has not yet responded to Bustle's request for comment.)

The lead-up to Alex's zing noted her penchant for wearing cat ear headbands, her blonde hair, and the fact that she got the camp counselor punishment in last week's veto and had to keep making hot dogs for the houseguests all week. Here's the setup for Zingbot's joke: "Alex, what do you call someone with bleach-blonde hair, wears cat ears, and handles lots of wieners?" Then, whatever the actual answer was ended up getting bleeped by CBS, leading many to believe it was pretty inappropriate. Former house guest Jessica Graf seems to believe Zingbot called Alex a "hoe," while other fans have guessed "slut," "whore," "stripper," "hooker," or "p**sy" (because of the cat ears) — and some even guessed that Zingbot called her a c-word. But whatever it was, it certainly wasn't nice. Not only did her joke play on stupid stereotypes anyway, but it was totally uncalled for and slut-shamey, and made it seem like making fun of women in this way was funny (the houseguests also couldn't stop laughing). Alex may have been laughing herself, but fans were not.

Between calling Mark a "byesexual" and mocking Josh's weight, most of Zingbot's digs hit below the belt and Alex's was no better. Pro tip to Zingbot next year: If you have to bleep the joke, maybe you shouldn't make it at all.