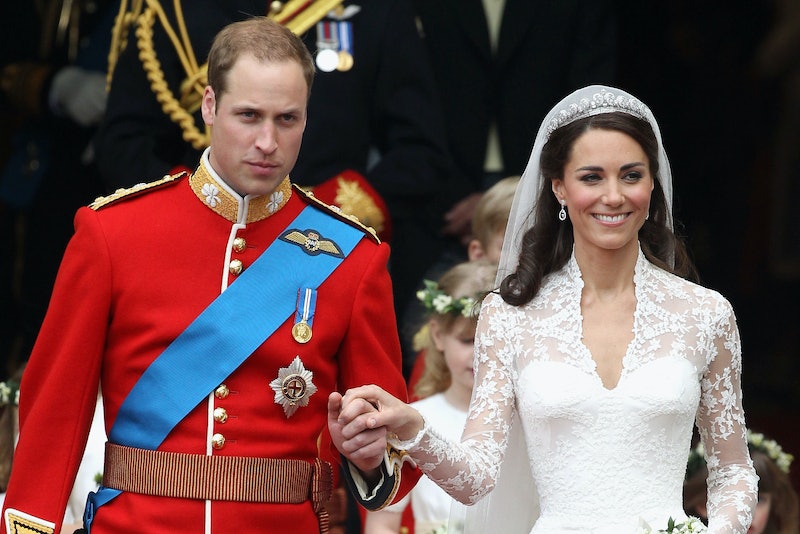 If you follow the British royals closely, then it's not that surprising if any members of the family have popped up in your dreams recently. They've been in the news a lot, so maybe that dream where you were friends with Meghan and Harry was just because you were anxious to find out their baby's name. But, there's a difference between those dreams and having dreams about being royalty yourself. What do they mean?

Unfortunately for any hopeful duchesses out there, dreaming about being royalty doesn't mean you're predicting your future, but try to speak that into existence all you want. Instead, dreaming about being a royal can have to do with how you feel — or how you want to feel — in your real life.

To start with a particular harsh one, though, according to Dream Bible, "To dream of royalty represents assumed power or automatic respect. Having control, leverage, or authority given to you without ever having to do anything for it. Coming first no matter what." Yikes.

MyDreamMeanings.com doesn't exactly have a positive spin on it, but its interpretation isn't quite so harsh as the one above.

"To envision yourself as part of royalty in your dreams displays your desire for power and wealth. Your wish is to be able to have the same respect and stately elegance that most royalty are graced with," MyDreamMeanings.com explains. "Royalty are given special treatment and looked up to by many. As a result, seeing yourself as royalty in your dreams denotes your position of great influence during your awake self or your desire to achieve such a high rank." So, you know, wanting to be royal isn't a bad thing, but feeling like you want to have a lot of power without doing anything for it probably is.

MyDreamVisions.com has a similar, but more lenient take that explains that you can crave some of the characteristics that are associated with royalty without being a power hungry maniac.

"Royalty can represent status, respect, specialness, wealth, power, popularity, approval, or other things you personally associate with royalty," the site reads. "Dreaming that you are royalty (queen, king, prince, princess) can mean you are feeling, wishing for, or feeling you are lacking one of the qualities listed above."

Meanwhile Aisling Dream Interpretation has an entirely different idea. Its entry for "royalty" reads, "To dream of royalty signifies that you are a spiritual leader. Spiritual leaders empower others to deal with their own problems."

According to MyDreamVisions.com, "Dreaming that you are with someone who is royalty can mean that your subconscious mind considers that person an acquaintance because you see them often in the media, or that you wish you knew them, or that you feel you deserve to know them or be in that social circle, etc." Any number of these reasons could explain why Meghan Markle popped up in someone's dreams. Everyone wants to be friends with her right now.

Journey Into Dreams explains, "Royalty in our dreams can be a sign of feeling like we are deserving better in our own lives or it can mean that we are feeling like we are on top of the world." As for the meaning of a queen, specifically, the site says, "The queen is a symbol of strength and power. If you dream of this symbol, it could mean that you are preparing to lead the way into victory in some aspect of your life," but adds, "Are you kind and benevolent in your leadership of others, or do you behave like a cruel dictator? Do you feel as if you are a worthy leader? Sometimes this dream symbol will appear when you may feel like you are not as fully in control as you would like to be."

Dream Moods also has an interpretation for a queen in a dream: "To see a queen in your dream symbolizes intuition, personal growth, power and influence. The queen is also a symbol for your mother." Well, there's a new aspect to think about.

As for kings, Dream Bible includes a few meanings that can be positive or negative, depending on how the king appears and what's going on in your world. Dream Bible explains, "a king may reflect an arrogant need for total control or difficulty giving up total power. Feelings about someone controlling in your life being tyrannical or impossible to deal with. Feeling that something is challenging your leadership." On top of that, "If a King dies in a dream it may represent a loss of confidence in some area of your life."

As with any dream, the meaning can have a lot to do with what is going on in your actual life. But, when it comes to dreaming about royalty, as you can see, power is definitely a common theme in interpretations. That, or you've just been following too many royal family Instagram fan accounts.