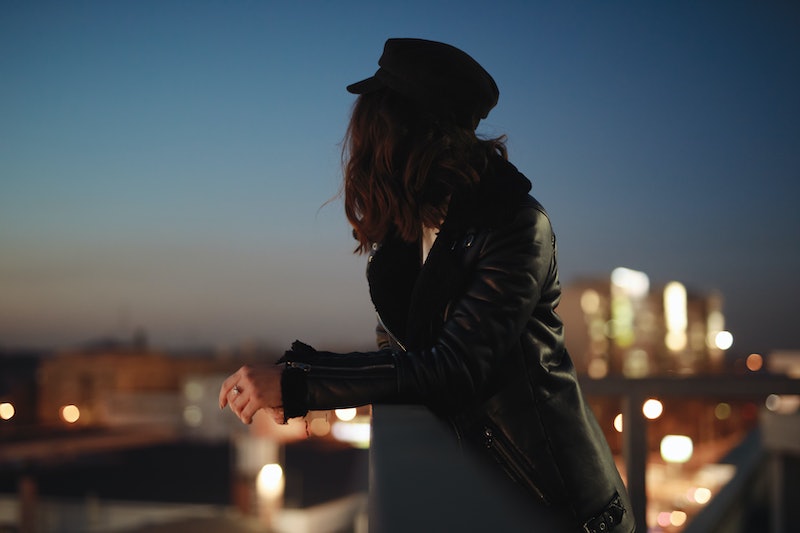 On the night of my now-boyfriend’s 30th birthday, in the wee hours of Thanksgiving morning, I was sexually harassed by one of the men in attendance.

As we got back to a sprawling apartment after a night out, this person made sexually-charged comments about my appearance in front of a friend. He then followed me downstairs into a dark rec room as I tried to find the bathroom. I was not drunk; he was buzzed. I was able to dodge his advances before they progressed, but it didn’t stop there.

When I came back from the bathroom a little shook, a guy friend — who had witnessed an exchange and was watching my back — asked me if it was time to leave, and I simply said it was. As my friends and I got our things together and called a car to leave, this person accused me of making a big deal of nothing. I was still bothered, but he was actually angry; he spat his words out at me. I went outside to stand in the Midwest cold until our car arrived.

In that moment, I could not distance myself enough. I felt like I had dodged a bullet and rushed to push it out of my mind. But the next night, I saw my harasser at another event. He reintroduced himself to me. “Were you at my apartment last night?” he asked. I nodded. He laughed. “I don’t remember a thing.”

Even in the moment, I believed this was untrue. It was the way he looked me in the eye, trying to gauge my response that convinced me, the calculated behavior of a serial offender. I later learned I was not the only one he'd harassed that Thanksgiving weekend. Knowing three other women may have experienced similar discomfort, anxiety, fear, or guilt that night has caused me to swell with anger ever since.

My boyfriend distanced himself from this person when I finally told him about the incident one year after it happened. We have had many discussions about #MeToo, sexual harassment, the patriarchal mechanisms that have kept women silent, and the failure of men to speak up on behalf of women. But the friend in question recently returned, wanting to reconnect with him — and apologize to me. He has “changed” since almost two years ago, according to a few people who are still friends with him.

My initial emotional response ran the spectrum — some strong cocktail of anger, anxiety, and guilt. Originally, I said absolutely not. Perhaps these are the feelings that will always stay with me. He is just one of too many harassers throughout my short life, and I have worked hard to distance myself from people like him. Knowing his behavior was habitual, as well, made it that much harder for me to entertain an apology. I could not stop imagining the many women, perhaps countless, he’d harassed. I was the only one getting an apology, because I was a perceived barrier to his friend.

Another part of me, raised on the idea that forgiveness is a virtue, and really struggling with our current “cancel” culture, felt guilty saying I wanted nothing to do with this person’s apology. Knowing my boyfriend had been friends with this person for a decade made it that much harder. He’d already been hurt by what happened. I hated to hurt him twice. I hated that he had to keep wishing things were different, or that he could help his friend be a better person.

I did entertain the apology. After all, in my mind, I’d endured the same and worse before — when I’d normalized it instead of allowing myself to feel hurt. But at the end of the day, after considering all the potential ways this could play out, I decided to prioritize myself.

I have a chronic pain condition, triggered by stress; dealing with an apology was not likely a good choice for my physical or emotional well-being. As Alissa Jerud, Ph.D., a licensed clinical psychologist and a clinical supervisor in the Department of Psychiatry at the University of Pennsylvania, tells Bustle, “[You] do not owe [your] perpetrators anything, and do not need to feel obligated to validate them in any way, shape or form.” I had to keep telling myself that his actions had ended his friendship with my boyfriend, not my own unwillingness to reconcile.

How To Handle The Apology Request

Should someone who has sexually harassed, abused, or assaulted you ever reach out and ask to apologize, pause and assess your gut-level response. “If it makes you feel uncomfortable, you do not need to respond in any way and should feel free to block or avoid the person, if possible,” Jerud says. That’s it. It can end there. Women are raised on good manners and the desire to make others feel OK, but please remember, you don't even owe your perpetrator a reply.

If you ever have an opportunity to receive an apology, think through all possible outcomes of entertaining it — not just the positive one, where you might make amends or feel some kind of empathy. “While a sincere apology might help you move on, a halfhearted apology might fuel unwanted feelings of anger and sadness,” Jerud says. “It can therefore be helpful to think about whether or not you want to open yourself up to potentially getting hurt again. It’s also worth considering how you will cope if the person gives an insincere apology or tries to put some of the blame for his or her actions on you.”

I did not want a face-to-face interaction, but I knew conveying a final message would give me peace and closure on the situation, even if I knew making amends would cause more harm than good. I told my boyfriend he could let my harasser know that I do hope he’s changed. I hope he sees the end of this friendship as a lesson that there are repercussions for these actions, and that he never does makes another woman feel uncomfortable or vulnerable again. “You have to decide if forgiveness is what you’re looking for,” Karla Ivankovich, Ph.D., a clinical counselor in Chicago, tells Bustle.

For me, it was. I wanted him to know that I forgive him. But I don’t want to mend the fence. I knew that if we had reconciled, we would eventually cross paths. Too many people in our larger circle would be aware of the tension, which would cause me even more anxiety. I would have my guard up, and I would constantly be watching his behavior toward women. I didn’t need that stress.

“You can forgive, but you don’t have to forget,” Ivankovich says. “You proceed by reconciling what you need to with yourself. It doesn’t mean that you have to go back and hang out with the person.”

If you do decide to hear your perpetrator out, take precautions and meet in a safe, neutral space or with someone you trust. “If there is any reason to believe that he or she might physically hurt you, then it is best to have this conversation over the phone or electronically, if at all,” Jerud says.

You are not obligated to respond with “compassion or forgiveness,” she says, or to fix them. “However, if you do want to educate them or help them reform, you can share information, including statistics, with them and ask them questions that might help them to view their behavior differently,” Jerud says. “For example, you might ask them how they would feel if another individual treated someone they love in the same way they treated you. In addition, you can give them resources to explore on their own.”

I feel lucky. I acknowledge others have been through much worse, while not wanting to minimize that my own experience was painful. This episode was so hard for me — from finally telling my boyfriend about the incident, to breaking up friendships, to having to entertain an apology and dig up past events. I was enraged when I heard that other women were harmed, and I’ve had a difficult time not analyzing and judging my own feelings.

I hope women know — whether they’ve been harassed, assaulted, abused, or made to feel vulnerable — that any emotions they’re experiencing in the aftermath are valid. Anger is normal. Resentment is normal, but finding ways to release it is crucial. “In the words of Buddha, ‘Holding on to anger is like grasping a hot coal with the intent of throwing it at someone else; you are the one who gets burned,’” Jerud says.

Whatever actions you take in the days, weeks, or months that follow assault or harassment should be for your own healing and peace of mind. You don’t owe your perpetrator anything. But you owe it to yourself to find peace.

Editor's Note: If you or someone you know has been sexually assaulted, you can call the National Sexual Assault Telephone Hotline at 800-656-HOPE (4673) or visit online.rainn.org.

Alissa Jerud, Ph.D., licensed clinical psychologist and a clinical supervisor in the Department of Psychiatry at the University of Pennsylvania

More like this
How Ovulation Affects Your Sense Of Smell, Libido, & More
By JR Thorpe and Lexi Inks
Here’s Where The NHS Nurses’ Strike Currently Stands
By Sophie McEvoy
25 Inspiring Quotes From Black Women To Celebrate Black History Month
By Kyli Rodriguez-Cayro and JR Thorpe
An Expert Weighs In On The Viral Raw Carrot Salad Trend
By Alexis Morillo
Get Even More From Bustle — Sign Up For The Newsletter

This article was originally published on Oct. 21, 2019