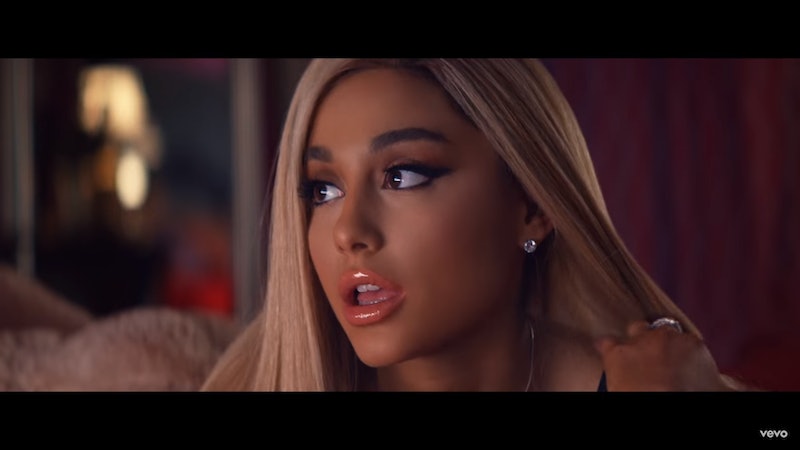 After keeping fans on their toes for weeks, Ariana Grande finally released her "Thank U, Next" music video this afternoon, and it's even better than we all imagined. The video pays homage to four classic early 2000's movies, Bring It On, Legally Blonde, Mean Girls, and 13 Going on 30, and is riddled with hat tips to the originals. However, there are a few moments in "Thank U, Next," like the "7 Rings" car license plate, that seem to have nothing to do with the films. In fact, many Grande stans think she might have teased a future song — and other ones, too.

If you missed the clues about "7 Rings" and the other future songs, which you probably did because they are so seamlessly weaved into the video, then here are the details. The "Thank U, Next" music video is filled with tons of familiar faces in cool cameos, including Grande's family and friends, as well as some of the movies' original cast members. But, beyond the familiar faces, there are possible hints at upcoming songs, too. For example, the "7 rings" hint appears on a car appears on a car license plate in the Legally Blonde scene. At the beginning of the clip, Grande is pulling up to school in a luxury car, and it's hard to miss her license plate, which reads "7 Rings." As it turns out, it's been rumored on Twitter that this may be an upcoming song on the Thank U, Next album.

Fans are speculating that the title "7 Rings" may be referring to friendship rings that she and her pals recently got. Grande supposedly posted this Boomerang to her Instagram story with herself and two others showing off diamond rings with the caption "3/7" written on the photo.

Fans also believe that the audio in the background of the "Thank U, Next" video may be the instrumental "7 Rings." If this is true, the song sounds like it will be a bit darker and eerie than this bop.

In the Mean Girls scene, you can read Grande's shirt says "A little bit needy." This is assumed to be in reference to a song titled "Needy," which Grande released a 45-second long clip for on Twitter around the beginning of October. In the lengthy clip, she sings "and I can be needy, way too damn needy."

While teasing the "Thank U, Next" video, she also tweeted a picture of this Mean Girls scene, using the rumored song's lyrics as a caption, "way too damn needy."

The last hidden message is within the Bring It On sequence. While the cheerleaders are flipping in the air, the word "Imagine" can be seen written on a building in the background. This one is a bit more difficult to catch, so go back to the video, around 2:15 mark and pay close attention, hit the pause button a few times and you'll eventually see it for a quick second.

There are less theories about what this potential song could be about, but it's got to mean something, right? The song title appears on an unconfirmed Thank U, Next tracklist that's been floating around Ariana Grande stan Twitter.

Either way, Grande knows how to keep fans guessing. The flawless integration of these clues and hints will certainly leave us all waiting to see what else she's got up her sleeve.

More like this
Ariana Grande & Kristin Chenoweth Sing A Wizard Of Oz Classic On TikTok
By Alyssa Lapid
Jennifer Coolidge Slid Into Ariana Grande’s DMs In The Most Iconic Way
By El Hunt
Twitter Is In Awe Of Taylor Swift’s “Lavender Haze” Music Video
By Jake Viswanath
Cruz Beckham Teased New Music With An Adorable Nod To Mom Victoria Beckham
By Stephanie Topacio Long
Get Even More From Bustle — Sign Up For The Newsletter
From hair trends to relationship advice, our daily newsletter has everything you need to sound like a person who’s on TikTok, even if you aren’t.