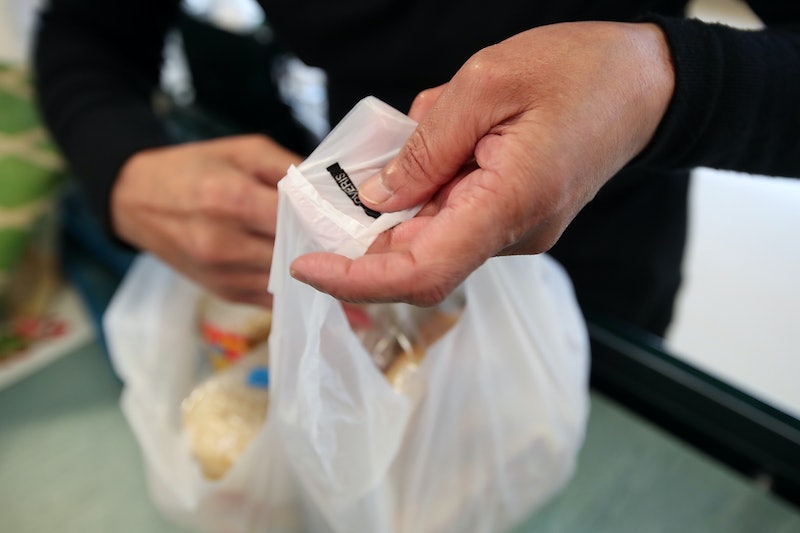 Plastic bags that claim to decompose might not actually be degrading in the way you might expect. A recent study has shown that some "biodegradable" plastic bags are surviving up to three years. The Guardian reports. The research which was conducted by University of Plymouth found that when these plastic bags were put into different conditions including submerged in the sea and buried in soil, they were still able to hold shopping. But what does biodegradable mean and is using these kinds of material the best way to ensure a sustainable future?

As ITV reports, plastic pollution is reaching an all time high and biodegradable and compostable products are becoming a popular antidote for this. According to National Geographic, 8 billion pounds of plastic waste flows into the oceans each year and less than a fifth of all plastic is recycled globally. Plastic bags are also awful for the ocean's biodiversity — they can be consumed by sea life including turtles, dolphins and whales. All of this means that biodegradable plastic has been seen the answer to the world's environmental problems.

Although compostable and biodegradable plastics are made from naturally occurring polymers like starch, they are still plastic and human-made. Even if these bags can decompose, what potential chemicals and by-products are being left behind when they do break down?

Jacqueline McGlade, chief scientist at the UN Environment Programme, told The Guardian that biodegradable products might not be a viable solution to the plastic crisis. “It’s well-intentioned but wrong. A lot of plastics labelled biodegradable, like shopping bags, will only break down in temperatures of 50C and that is not the ocean," she explained. "They are also not buoyant, so they’re going to sink, so they’re not going to be exposed to UV and break down.”

Instead of putting energy into creating even more plastics, regardless of whether it's biodegradable or compostable, the aim should be to cut down on plastic production all together. Yes, individually cutting down plastic use is imperative, but the onus should be placed on large companies who are producing significant amounts of plastic in the first place. The government did place a charge on plastic shopping bags back in 2015, making them 5p instead of free, but much more still needs to be done. Greenpeace have recently set up a petition to stop supermarkets in the UK from using throw away plastics because, as Which? reports, supermarkets generate 800,000 tonnes of plastic each year.

While we wait for wider changes to be implemented by the government, using tote bags instead of plastic bags is one easy solution to cut down on plastic use. So is buying loose fruit and vegetables instead of packaged groceries and reusable bottles rather than plastic ones.