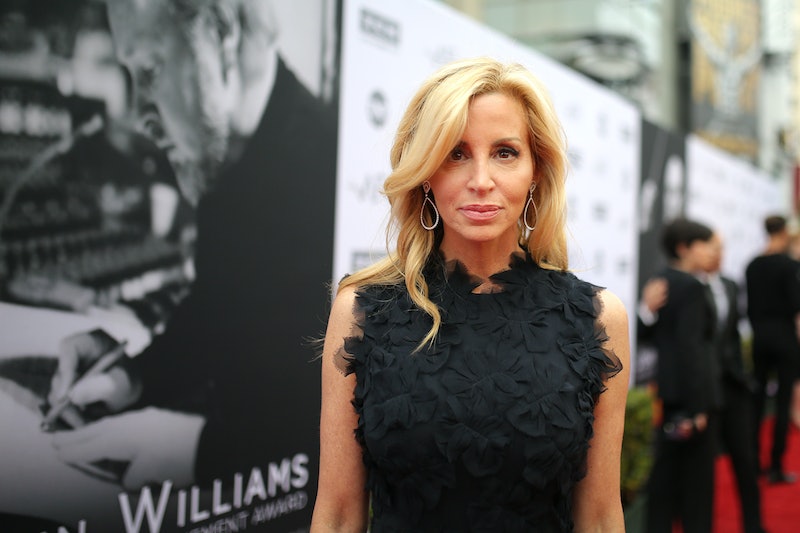 Camille Grammer Meyer has flashed in and out of the Real Housewives universe over the years — she was part of the original cast of Real Housewives Of Beverly Hills, back when she was married to Kelsey Grammer and, dare I say, one of the villains of the show. Well, what a difference a few years makes! Camille Grammer is now an RHOBH "friend" (she's not a regular cast member) of the show, and her presence is a welcome addition. She knows the history well enough to not get too embroiled in the petty drama, but ready to throw down over dinner if she has to.

Andy Cohen said in December that Camille will always "be in the Housewife universe," adding that her return was slow and steady for a reason. "You know," Cohen said, "Camille really had a rough first season, and so I think she feels… I think it might be challenging for her to be in front of the camera, because she let everything rip Season 1 and she had a rough time with it." Moving up from "guest" to "friend" is pretty big deal and means that she's more than comfortable sharing parts of her life on camera. Who knows — it could turn into a regular thing again for her if she makes it through the Dog Drama™ this season unscathed.

Besides being on Real Housewives Of Beverly Hills and living her life taking care of her family, Camille is, according to her Twitter bio, the spokesperson and Chair for The National Race to End Women's Cancer. As a cancer survivor herself, it's a role that's very near and dear to her heart. Camille tries to bring awareness to all cancers, from encouraging screenings to talking about cannabis-related products that can help with the nausea and side effects from chemotherapy. She spends a lot of her time just trying to help other people, which seems like a lovely way to go through life.

Additionally, things are good in Camille's love life. She and David C. Meyer married in October 2018 in Hawaii, and Kyle Richards was a bridesmaid (how far they've come, huh?). Of her nuptials, Camille told People, "It means so much to me. And I know we will honor our commitment to each other for the rest of our lives.” That part of Camille's life is locked down. Unfortunately, though, Camille and her family lost their home in the Woolsey fires in Malibu, California, in December 2018. Luckily, the kids and animals are fine, but the house didn't make it through the epic blazes. The New York Times reported that almost 7000 homes were lost in the overwhelming blazes in late 2018, making Camille a part of a really big tragedy.

Camille is also in a bit of legal trouble with an ex-boyfriend. According to Yahoo!, in 2014, Camille accused ex Dimitri Charalambopoulos of assaulting her while she recovered from cancer surgery, and she sued him. Charalambopoulous countersued, alleging that she made it all up and insisting on damages due to defamation. The trial is finally happening, and Camille recently requested that no media be allowed in the courtroom while she and Charalambopoulous duke it out. This would mean a ban on "any photography or taking of video during the trial" and that any media requests would be denied as long as the trial were taking place.

It's an understatement to say that Camille has had a complicated few years, and yet she's still so positive and out for helping other people. A few bumps in the road is nothing compared to the sunny outlook for Camille and her family's future, and it's nice to know that she knows it, too.