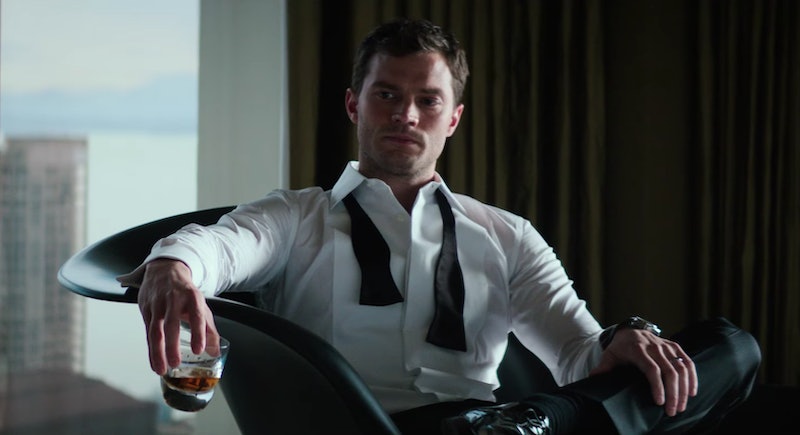 Fifty Shades Freed ends with a newly married Christian (Jamie Dornan) and Ana (Dakota Johnson) spending an evening in his lavish penthouse. After a surprise pregnancy and a near-death experience, the Greys have been through a lot. So, naturally, gazing lovingly at her husband sitting behind the piano, Ana decides it's time for a go in the red room. She goes upstairs, carefully lays out his dominating jeans and sends him a text telling him to meet her in the red room. (This detail is important.) When he enters — jeans on, shirt off — he circles her and says a line fans of the original trilogy have been waiting for: "You're topping from the bottom, Mrs. Grey. But I can live with that."

Christian isn't in control anymore, they both are. "I think that in this film both Anastasia and Christian have figured out that it's going to be a constant flux of control and power between both of them," Johnson said in an interview with Prestige. "That being said, Anastasia has acknowledged and accepted the more sexual and dominating side of herself, which is a driving force in the film." As Ana becomes more dominant, her role as a submissive shifts; hence, the "topping from the bottom."

For Johnson, Ana's growing sexual awareness and confidence reflects the greater theme of the film: self acceptance and empowerment. "Well, I think the message truly is about — being true to yourself and honoring yourself with grace and vulnerability, and still being able to be powerful," the actor told ABC News. "And say[ing] what you want and what you need, but respect yourself in the process." Johnson might have been talking in broader terms, but that doesn't make it any less applicable to Ana's sex life. And, hey, if being true to yourself means "topping from the bottom," then by all means, do what works.

This article was originally published on Feb. 9, 2018