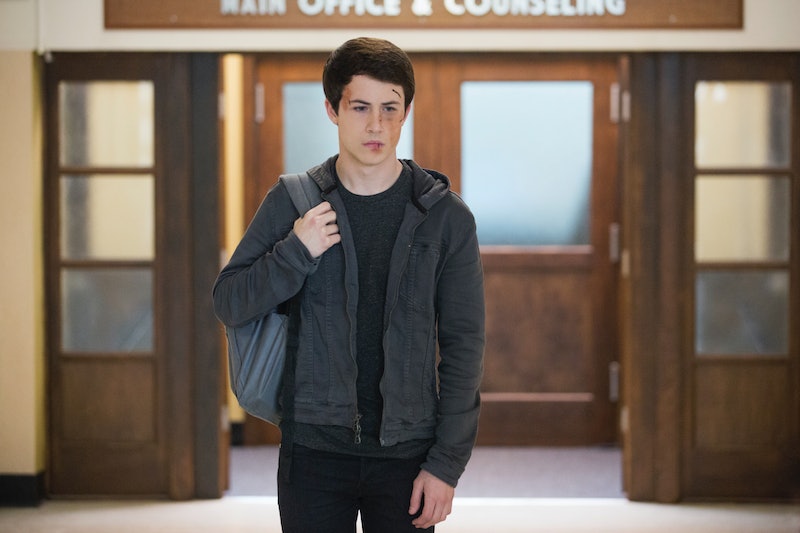 SPOILERS AHEAD for 13 Reasons Why Season 2, Episodes 1-4. There are a lot of mysteries throughout 13 Reasons Why Season 2 — who is taking the polaroids of Bryce? Was Hannah telling the truth in all of her tapes? Who is threatening the students? But looming larger than all of them is a question that has been asked since the beginning of the show. How come all of these teenagers have a ton of tattoos? Adding to the pack, at the beginning of Season 2, Clay gets a tattoo on 13 Reasons Why that means something really personal to him. While his tattoo isn't finished on the first visit — he faints part of the way through — the intention behind his tattoo is representative of a real movement dedicated to the prevention of suicide.

Project Semicolon, founded in 2013, is a non-profit organization that uses a semicolon as a symbol to unite those who struggle with mental health issues and suicidal thoughts. The work of Project Semicolon is based on the belief that "suicide is preventable and everyone has a role to play in preventing suicide." Project Semicolon founder Amy Bleuel explained that the semicolon is symbolic of suicide because "a semicolon is used when an author could’ve chosen to end their sentence, but chose not to. The author is you and the sentence is your life."

Semicolon tattoos became a symbol of the movement, and supporters of the cause took to getting their own. That includes 13 Reasons Why executive producer Selena Gomez, who got a semicolon tattoo alongside cast members Alisha Boe and Tommy Dorfman, to commemorate the release of the first season and pay tribute to those who struggle with the issues portrayed on the show.

Clay's semicolon tattoo is clearly a tribute to the people in his life who suffer from suicidal thoughts, depression, and self-harm — but chances are it's mostly a tribute to Hannah. Season 2 begins a few months after the events of Season 1, showing Clay and Skye dating and follows them as they attempt to bond over getting ink. When Clay decides to get a semicolon, it's likely that he doesn't tell Skye what it represents — or at least who he's getting it for.

Skye has been expressing some resentment over the fact that Clay still seems to be hung up on someone who isn't alive and that Clay's lingering thoughts about Hannah are affecting their relationship. While the semicolon is a nice gesture of support towards those who have struggled with mental health issues, Clay is not short on reminders of Hannah's existence. It seems that everywhere he turns, the image of Hannah is on the periphery of his vision — or right in front of him where Skye should be. However, Clay's lingering thoughts about Hannah don't seem to be making him any more aware of what the real Hannah was struggling with.

In an equally humorous and symbolic twist on the tattoo, however, Clay's mid-tattoo fainting left him with only a comma tattoo. The symbolism here seems to suggest that Clay is interested in taking actions to support those who deal with mental health issues — but implies that he may not be going about it the right way. While he's trying to be understanding of Skye's struggles with self-harm, he's baffled by the fact that Skye doesn't have an explanation for why she hurts herself and he gets upset when she doesn't seek help from him during those moments. Clay seems to believe that talking to him will be the solution for Skye's impulses, when the situation is a lot more nuanced than that.

The lesson Clay took from Hannah's tapes seems to be that depression and suicide have a clear cause-and-effect relationship, because that fits into a hero-and-villain narrative where he's the good guy and Bryce Walker is the bad guy. However, mental health isn't that simple. While he wants to be supportive of those suffering, he's working with a limited view of what contributes to depression, self-harm, and suicide. Perhaps once Clay puts some more effort into learning how complex and wide-spread these subjects can be, he'll be able to put the other half of that semi-colon on his body. It's important to support those struggling with mental health issues, but it's even more important to properly understand, to the best of one's ability, what others are going through. That's what real support looks like.

More like this
Does The 'Echoes' Ending Mean There Will Be A Season 2?
By Kadin Burnett
Here’s How 'House Of The Dragon' Diverges From The Book’s Timeline
By Allyson Johnson
The 'House Of The Dragon' Showrunners Revealed One Key Similarity With 'GoT'
By Grace Wehniainen and Kadin Burnett
Everything To Know About 'And Just Like That...' Season 2
By Jack Irvin
Get Even More From Bustle — Sign Up For The Newsletter