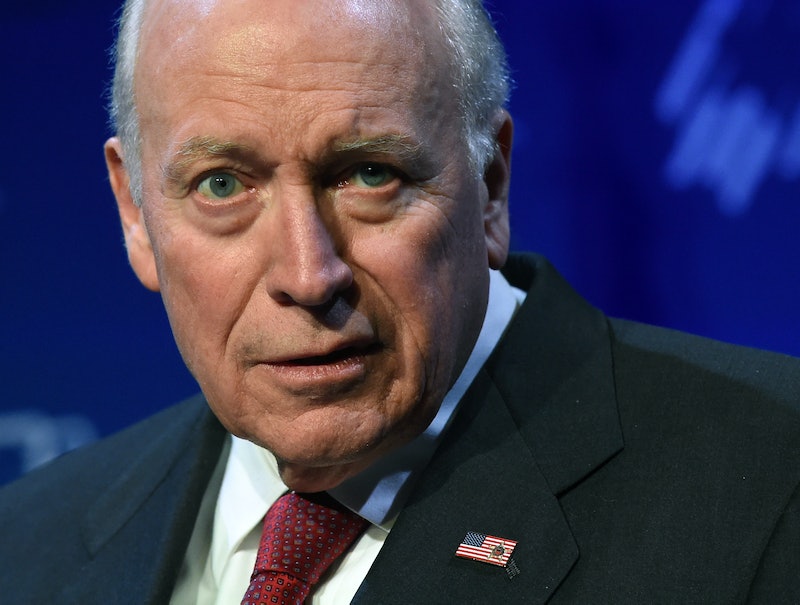 Adam McKay's new biopic, Vice, has Dick Cheney for a protagonist, but the former vice president isn’t quite shown in a favorable light. The film delves into how Cheney became one of the most powerful VPs in history, and the downsides that came with his quest for power. McKay read various Cheney biographies, including Angler by Barton Gellman and Cheney’s own memoir In My Time, in order to make Vice as accurate as possible, according to the The New York Times. But what does Cheney actually think about Vice?

In an interview with Screen Daily, McKay claimed that Cheney didn't want Vice to be made — or any other movie about his life and career. “Everything I read about him, I was like, ‘Oh my God, I didn’t know he did this,’ and I realized that his life and rise to power synced up with the Republican revolution that’s changed America. But most of all I love the fact that he did not want a movie made about him. If you read his autobiography, it is so dry — everything’s covered up,” said McKay.

McKay told Deadline that he didn’t attempt to include the Cheney family in the process of making the film, because he believed they wouldn’t let him talk about the less favorable parts. “It’s tricky, because if you go to them, they then have a claim that they’re involved in the movie. They weren’t going to support this. You read his autobiography and see that he keeps everything on lockdown. He doesn’t say anything. Lynne Cheney says a little more than him, but there was no way they were going to go for us talking about the thing between their daughters,” explained the filmmaker, referring to the ongoing feud between Mary and Liz over the latter’s views on same-sex marriage.

But, to McKay, it was just as important to critique Cheney, as it was to show tender, private moments in the Cheney family. “We really did try and be as truthful as humanly possible. And balanced. Like the scene where Mary comes out of the closet and Dick says, ‘It doesn’t matter. We’ll love you no matter what,’ and she tears up and her mother says, ‘It’s going to be so hard for you.’ That’s word for word what they said, by several accounts,” explained McKay.

But despite McKay claiming that Cheney did not want any biopics of him to be made, the filmmaker also told Yahoo Entertainment that he believes Cheney will embrace the flick. “I’ve always said that up until the last minute of the movie, I don’t think Dick Cheney would have a problem with the movie. We were very honest and fair,” noted the director.

As Vox noted, the film has been very divisive in its reception — some critics believe it’s a brilliant critique of the Bush administration, while others assert that Cheney was portrayed as a “cartoon villain.” As of now, Cheney hasn’t commented publicly on what he thinks about Vice. And unless he does, we'll never know which of the reviews he agrees with.