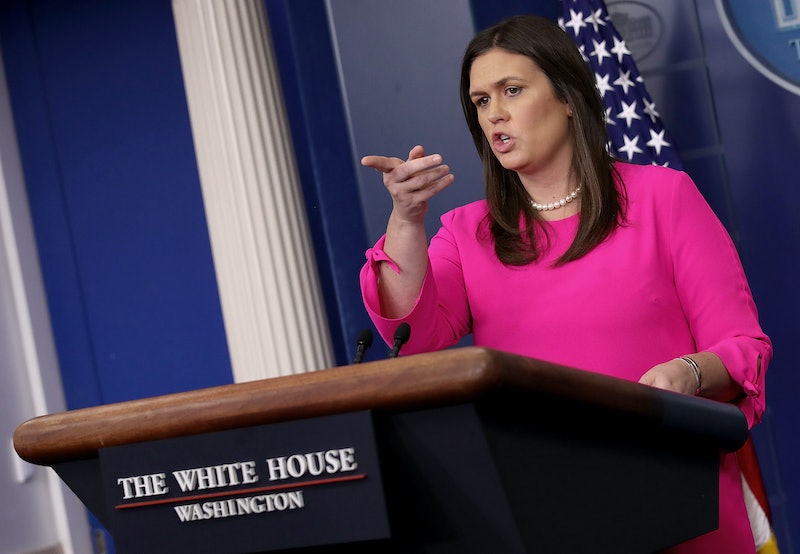 It's easy to take for granted that everybody just agrees on what some terms or words mean. But despite dictionaries and encyclopedias offering a generally clear guide, finding meaning has been an ever-murky process under the current administration. This was truer than ever on Monday, when experts found themselves debating what due process requires after Sarah Sanders claimed immigrants don't need judges.

The debate stemmed from comments Trump made on Monday morning, and which the White House doubled down on in the afternoon.

"Hiring manythousands of judges, and going through a long and complicated legal process, is not the way to go - will always be disfunctional. People must simply be stopped at the Border and told they cannot come into the U.S. illegally. Children brought back to their country," Trump tweeted. He went on to claim that "illegal immigration will be stopped in it’s tracks - and at very little, by comparison, cost."

White House Press Secretary supported Trump's tweets in a press briefing on Monday afternoon. "Just because you don’t see a judge doesn’t mean you aren’t receiving due process," Sanders told reporters, according to video footage of the briefing. And according to Sanders, the American public agrees with her. "Virtually all Americans agree that it makes no sense that an illegal alien sets one foot on American soil and then they would go through a three- to five-year judicial process to be removed from the country," she said.

But some experts seriously disagree.

As Time reports, the Supreme Court ruled on an uncannily similar issue in 1953. The case was Kwong Hai Chew v. Colding, and the Supreme Court ruled 8-1 that even people who permanently lived in the United States could not be kicked out of the country until they went through the proper legal procedures. And that, according to some definitions, means a hearing before a judge.

According to The New York Times, courts have repeatedly upheld that even non-citizens have a right to due process. It's what due process actually entails that is a little less clear. The Times reports that a statute does exist which would allow for deportations without a hearing if a migrant is caught within 100 miles of the U.S. border, or else if they are caught within two weeks of an unlawful cross. But all of this changes if a migrant claims asylum.

One major issue with Trump's and Sanders' statements on Monday is that if migrants are turned around before crossing the border, then they likely will be prevented from claiming asylum at all. And recently, the Trump administration has opted to make it more difficult for certain people to seek asylum, including, specifically, those who say they are victims of domestic violence. It's not clear exactly how such a proposed policy would impact the rate of people currently seeking asylum protection.

Trump and the White House's comments are one of the latest developments in an ongoing immigration debacle. The controversy has been ensuing since Attorney General Jeff Sessions and the Department of Homeland Security announced they would be implementing a "zero-tolerance" immigration policy. Under the policy, every single adult caught illegally crossing the border would be prosecuted. The policy has resulted in thousands of children being separated from their families, because children may not be kept in jails.

The policy has triggered massive outrage among members of both major political parties. Even as the administration has progressively retracted certain aspects of the policy, protest plans have ensued. Emotions and frustrations are so heightened that individual Trump officials are facing protests by civilians. Even certain politicians have encouraged Trump opponents to directly confront members of the administration when they find them out in public.

Trump's assertion that due process could be skirted in order to expedite the removal of undocumented immigrants marks the most recent episode in what has become a 24-hour news story. Whether the administration will actually seek to deport immigrants without hearings is not entirely clear.