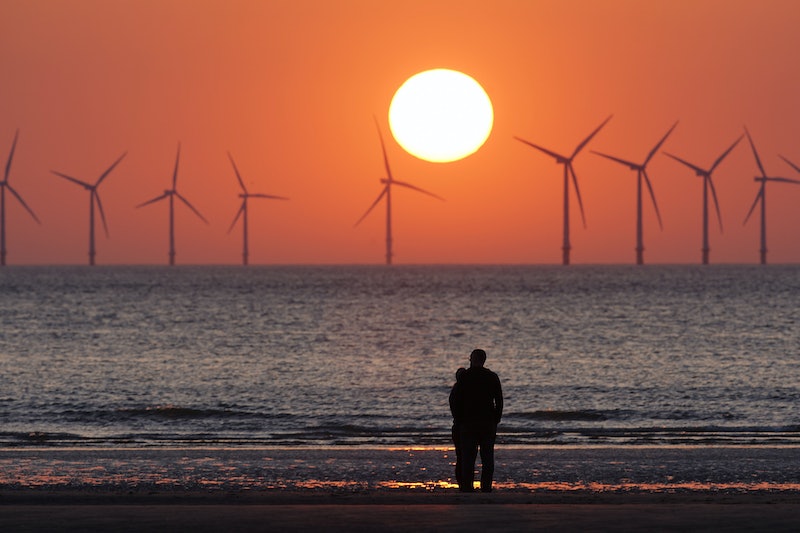 No matter what your astrological sign is, June is probably going to be a pretty significant month for you. First, we've got the New Moon rising on June 13, which signifies the end of one cycle and the beginning of a new cycle — in other words, you can expect lots of changes. Once that energy clears, there's a lot more coming: June 21 is the Summer Solstice, as well as the first day of Cancer season. What does it mean if these two events are happening on the same day? Even if you're not a Cancer sign, you're going to want to know what to expect.

Let's start with the beginning of Cancer season. According to Numerology Sign, the sign of Cancer is ruled by the moon, which is associated with the oceans and the tides. Cancer season gives us a deeper connection to the major cycles of life, much like the changing of the tides. Numerology Sign says, "This star sign is like the ocean with creative depths, psychic energy, and an identity marked by the powerful meaning behind life's matrix."

Cancer signs have strong ties to family and home, and they are also known for being very emotional. According to Astrology.com, this is because the Moon is the ruler of moods. Cancers "can be overly sensitive, easily hurt, and prone to brooding. Even so, Crabs find it easy to be sympathetic to others and are quick to show their affection." Cancers are known for being intuitive, emotional, gentle, and spiritual, and this is the kind of energy you might notice during Cancer season.

The Summer Solstice gives us the opportunity to reinvent ourselves. It's a time for reflection and growth, and a great time to make some much-needed changes in our lives. But it is also a time to celebrate nature and the world around us. Natalia Kuna says, "The Summer Solstice is a celebration of the return to light, and it so powerfully reminds us of the light within each of us and the full potential of our individuated as well as united light or christ consciousness. It is about awakening or reaching enlightenment, as an omnipotent symbol of ascension and the ultimate triumph of light over darkness."

The energy from the Summer Solstice and the energy from Cancer season gives way to a lot of emotional moments, especially for Cancers. As Numerology Sign says, "Cancerian energy is leading us through this cycle to profound psychic exploration and emotional depth."

To take advantage of all of the energy in the air, you can focus on getting in touch with your emotions. This is a good time for some introspection and deep thinking. You should also get in touch with your inner creativity. Numerology Sign says, "During this Cancer Season 2018 you should make sure to devote your time to doing what inspires you. Cancer individual’s have a deep internal drive to live authentically. If the life they are living is not authentic to them they are the most likely zodiac sign to make monumental life changes. Due to their security loving nature it may be hard to make a change but the cardinal nature of the zodiac sign drives them towards living their truth anyway."

This may be an emotional time, but it's also a great time to look inside yourself and get spiritual. On June 21, allow yourself to spend time outdoors, connecting to nature, and give yourself plenty of time to think. This is the best way to celebrate both the Summer Solstice and the beginning of Cancer season!