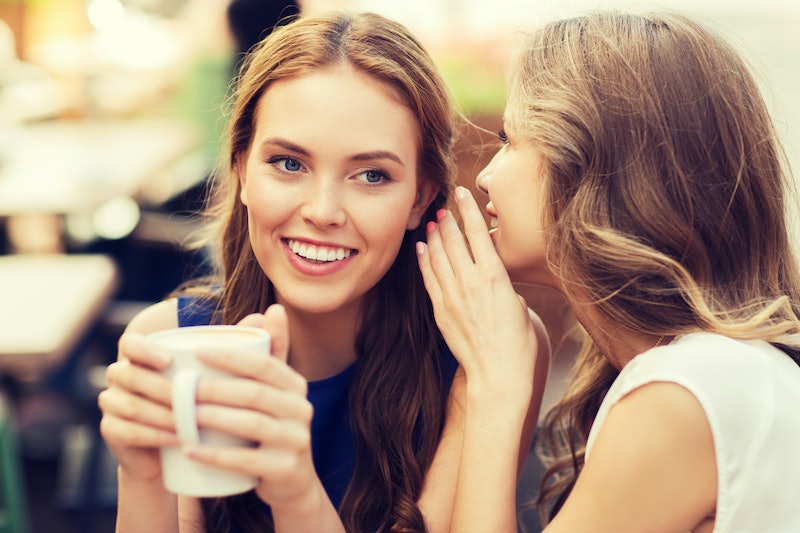 We are, without a doubt, having an astrologically intense summer 2019. Not only is Mercury retrograde (in addition to a bunch of other planets simultaneously being retrograde, too), but we're also in the middle of our bi-annual eclipse season. And all will be illuminated yet again, as the July 2019 full moon rises in all its summertime glory on Jul. 16 in the diligent, hardworking sign of Capricorn. As an earth sign, Capricorn is practical and rational — a realist at heart. No time for BS, Cap energy comes through ready to take charge, get real, and work harder than anyone to achieve a goal. But what does it mean when a full moon is in Capricorn? The July full moon is bringing up major shifts around work and power.

And before we go further, I should note that this isn't just any ol' full moon in Capricorn — it's also the summer's big partial lunar eclipse, which means we're going to be feeling the truth-singin', often-chaotic energy that eclipses tend to bring forth. During a lunar eclipse, the earth passes between the moon and the sun, making it impossible for those two planets to hear or see each other's energy.

This is likely to make us feel off-kilter — and that's OK! The energy of the eclipse asks us to sit back and open up, because it's the universe's chance to reset your path, show you the truths that have been lurking beneath the surface of things, and force stagnant or unresolved energies and decisions to an ultimate head. Don't expect to be in control. July's partial lunar eclipse in Capricorn has a major influence on careers and business (which makes sense, given that Cap is such a work-oriented, security-seeking sign), so we can expect to see things shake up when it comes to our jobs or even career goals under this moon.

Bustle spoke with astrologer Lisa Stardust about the energy of July's full moon and partial lunar eclipse. "This luminary will bring power struggles to a head and even love triangles," she explains. "That’s why it’s important to give your tender heart a break during the eclipse, because it triggers deep sentiments to arise within." This full moon is in a tight conjunction with planet Pluto, which rules over power, secrets, and karmic debts. This intense aspect is casting a major shadow over our ability to be emotionally controlled: Expect to feel agitated and confrontational, and look out for power struggles. You don't want to be at war with yourself or anyone else.

As mentioned, Capricorn energy is work-oriented, so we can expect to feel the energy in that area of our lives, too. "This Full Moon will evoke a sense of living a purpose and with confidence in what you want to achieve in life," wrote intuitive healer Carla Mary on her site. "It brings to our awareness ... how we are using our talents, time, allies and resources." Capricorn is careful, cautious, and the man (or woman) with a plan — a full moon in this sign helps us confidently see where we want to be, but more importantly, how we plan to get there.

That said, with Pluto's shadowy influence and the intensity of the eclipses during this particular Cap full moon, we're going to want to wait before putting any of this newfound, full-moon-inspired awareness into practice. "Taking a step back from work projects is advisable as you may feel the power struggle manifest with your boss or colleagues," Stardust continues. "Sometimes taking a break once in a while is a great idea, don’t forget that!" Cap energy can make us feel like a boss, which is obviously ideal — but with the high probability of power struggles and unnecessary drama ensuing under this luminary, it's best to stay conscious and check your work ego at the door.

If your birthday falls around this time of year and your moon zodiac sign is Capricorn, you might want to check your birth chart to see if your natal moon happened to be full in Capricorn. "If you have a full moon in Capricorn in your natal chart, you are a person who finds comfort in working hard and relishes growth within," explains Stardust. "The eclipse will activate your emotions to take flight and to set limits upon the amount of work you take on, requiring you to take a break from projects for a minute, which will go against your inner desires." And while this is definitely true for anyone with a natal full moon in Capricorn, this same energy is going to be felt by all under this Capricorn full moon and lunar eclipse transit.

Between the intensity of this full moon in Capricorn, the concurrent eclipses, and the retrograding planets that are forcing us to slow down, we've got our work cut out for ourselves. It's going to be important for all zodiac signs to up the self-care, stay communicative, avoid power struggles, and allow our full moon realizations to simmer before we decide to put them into action.