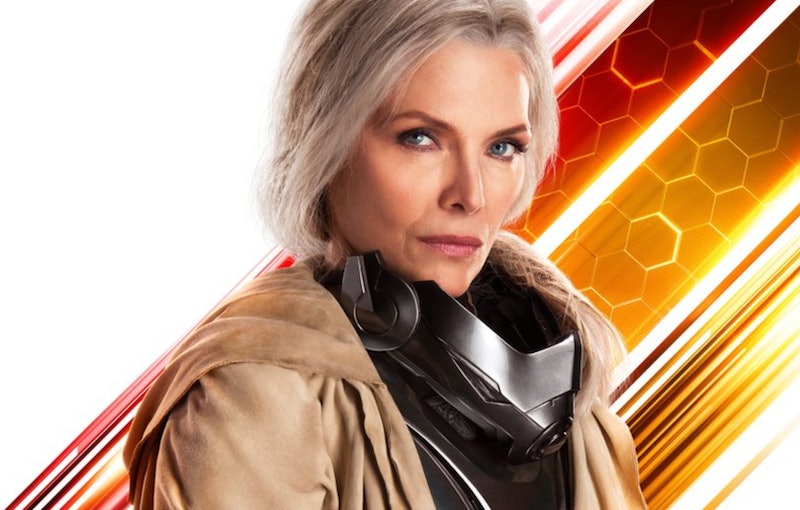 Spoilers for Ant-Man and The Wasp ahead. Ever since half of the superheroes in the Marvel Cinematic Universe disappeared at the end of The Avengers: Infinity War, fans have been wondering how their favorite characters are eventually going to come back to life. (Because, let's face it, we all know they are). Well we may have a bit of an answer thanks to what happens at the end of Ant-Man and The Wasp, as the Quantum Realm and Janet van Dyne (Michelle Pfeiffer) may play a big part in undoing the "dusting" of all our beloved Avengers. The conclusion of the new movie sees Janet make a big move, one that not only saves the other heroes from the villain Ghost, but that also points towards the future of the MCU. But exactly what does Janet do to Ghost the end of Ant-Man and The Wasp?

The climax of the film finds Janet, Scott Lang (Paul Rudd), Hope van Dyne (Evangeline Lilly), and Hank Pym (Michael Douglas) cornered by newcomer baddy Ghost (Hannah John-Kamen). Ghost has the ability to phase in and out of matter, i.e. walking through walls and disappearing and reappearing.

Ghost's real name is Ava Starr, making her the daughter of Elihas Starr (AKA Egghead from the comics) and Elihas and Hank Pym (Michael Douglas) used to work together before having a major falling out. Afterwards, Hank basically had Elihas shunned by their community, so Elihas decided to experiment with the quantum realm on his own, and Ava was an innocent bystander in a major accident. Though her parents died, Ave survived, albeit with an extraordinary gift/curse. Her cells constantly and painfully divide and come back together, making her phase in and out of reality. Sure, it's a superpower, but all Ghost wants is to be normal again — which is where Janet Van Dyne comes in.

Instead of fighting Ghost physically, as the others want to do, Janet has a better idea. She sees that Ghost is actually in terrible pain, and that she can help. She puts her hands on either side of the character's head and basically sucks some energy out of Ghost, settling her cells and grounding her body in one reality.

Janet's ability to do this comes from her three decades living in the Quantum Realm, where she absorbed incredible atomic energy and evolving into something superhuman. In addition to helping Ava, Janet is also able to help Hank earlier on when, inside the Quantum Realm on his way to find her, he begins to hallucinate and lose his breath. Janet finds him and settles his mind with her hands, and when they start reconnecting, Janet explains that the Quantum Realm has done something to her. "It changes you," she says. "Adaptation is part of it, but it's more...evolution."

Janet has clearly evolved in some way, and her new powers are pretty amazing. She seems to be able to control things on a cellular level, balance the atomic reality of objects, and heal people.

During Ant-Man and the Wasp's closing credits scene, Scott heads back into the Quantum Realm to collect some of the particles to, as he says, "Help heal our new Ghost friend." Janet and Hank seem to have figured out how to harness the power of the Quantum Realm, and Janet's ability may be the key in wielding it.

Of course, the post-credits scene also reveals that Scott gets trapped inside the Quantum Realm, because Hank, Janet, and Hope all get dusted after Thanos' Infinity War decision. How Scott gets out and how the power of the Quantum Realm might help bring back the lost Avengers is something fans will unfortunately have to wait awhile to find out. But there's a pretty good chance that it might have to do with that new Ghost friend of theirs.