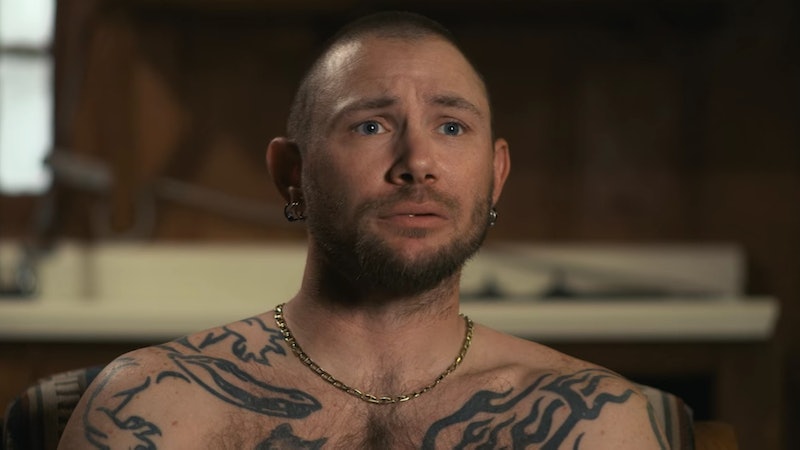 To say that Netflix's docuseries Tiger King is divisive would be an understatement. People are obsessed, disgusted, or completely conflicted about the show, and that includes one of Joe Exotic's ex-husbands. In a recent interview with Entertainment Tonight, John Finlay revealed what he really thinks about Tiger King, and his review isn't exactly positive. Though he doesn't exactly take issue with things in the documentary, it's what directors Eric Goode and Rebecca Chaiklin didn't show that bothers him.

Finlay thinks Tiger King failed to tell his entire story, and made him "look like a drugged-out hillbilly." In fact, during the entire series, Finlay's interviews showed him shirtless and covered in tattoos. At the time of his interviews, he was also missing most of this teeth that he has since got fixed and Finlay is upset that Tiger King didn't show "the new and improved me." He also told ET that his life has changed drastically since working with Exotic at The Greater Wynnewood Exotic Animal Park.

Today, Finlay is a welder and lives with his fiancée named Stormey, who isn't the same woman Finlay had a baby with and left Joe Exotic for in the documentary. "I'm waiting to get my story out, to be able to sit down with a producer or reporter to actually get the whole story out," he told ET. "And to really let the world know what my life was actually like."

According to a March 26 Los Angeles Times interview, Chaiklin said it was Finlay's decision to film shirtless. "I think he was very proud of his tattoos," she said. As for his teeth, Finlay showed off his pearly whites in a March 26 post on his Facebook page called "The Truth About John Finlay" with a photo of him smiling with his current fiancée. "Yes I have my teeth fixed," he wrote in the caption. "The producers of the Netflix series had video and pictures of this, but chose not to show it."

Finlay isn't the only one upset with Tiger King's finished product. Carole Baskin and her husband, Howard Baskin, were definitely not pleased by their portrayal, taking specific offense at the accusations implied in the series about Baskin's ex husband. Doc Antle, a rival wild animal exhibitor, also took offense with his section of the docuseries.

Despite his disappointment, Finlay is grateful for the support he's received since Tiger King's release. As he wrote on his Facebook page, "Y'all are great people and make it worth it. Stormey and I greatly appreciate your support."