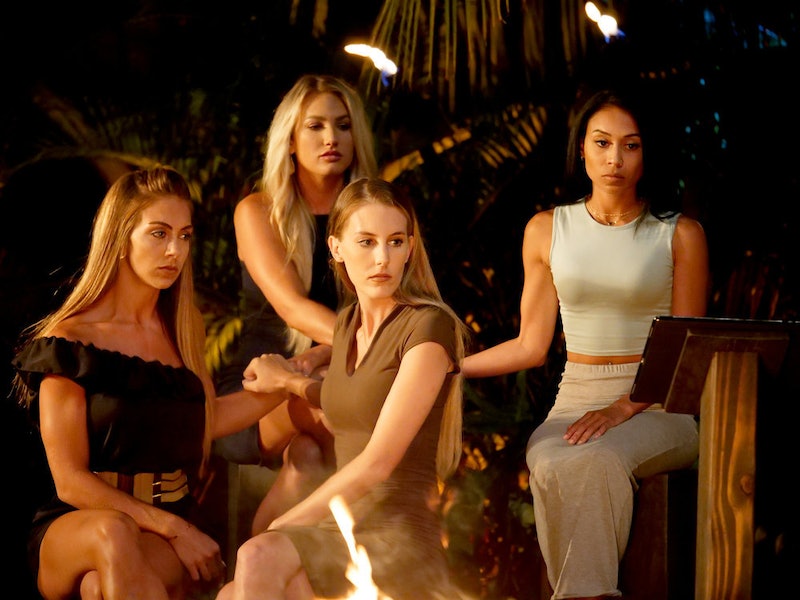 There were a lot of twists and turns throughout Tuesday night's drama-packed Temptation Island finale, but perhaps the most shocking moment came toward the end. Not only did Evan and Kaci breakup — which at this point, felt inevitable — but he and Morgan stayed together, and then they. got. engaged. And if you think you weren't expecting it, you can only imagine what Kaci thinks of Evan and Morgan's engagement. However, her real answer may surprise you.

"I genuinely hope this is the real deal for Morgan for her family’s sake," Kaci tells Bustle via email. "I do have my doubts, because I know Evan better than anyone. Ten years is no joke... he is extremely good at pretending he has changed... No woman deserves to go through what that man has put me through for all of my adult life. I sincerely hope she is truly his soulmate, and that he has truly changed and that she will never have to deal with the mind games and toxicity that I have experienced with him. No one deserves that." (Reps for Evan and Morgan declined to comment on Kaci's claims.)

According to Kaci, her drama with Evan didn't end when they left the island. "After the show Evan continued to play us both," she claimed. "This is simply what Evan does. No hate. No shade. It's just the sad, ugly truth. He was telling me there is hope for us, that he thinks he took things too far on the show, that we would live separately and work on our relationship, was sending me loving text messages, calling me and telling me how 'the show pit us against each other,' etc. Meanwhile, he's telling Morgan that I'm a liar and manipulator and denied everything he was saying to me." (Again, reps for Evan and Morgan declined to comment).

So in light of that, how did Kaci feel when she heard that he and Morgan would be tying the knot? "When I heard about their engagement, I actually felt such a sigh of relief. I even texted Val [Osipov, another castmate on the show] as soon as I found out and asked him if it's normal that I'm so OK with this."

After such a long relationship, it takes time to get closure and start moving on, but it sounds like Evan and Morgan's engagement was exactly the kind of push Kaci needed to let it all go. "I think I felt so relieved and happy about it because I knew he was really gone and out of my life for good finally, and that I was really free," she continued. "At that point, I knew I would never have to see or deal with him again. I wish them the best, and hopefully Morgan can heal and change him for both of their sakes. I wish them a happy, healthy marriage and I genuinely can't wait to find my person because my rose-colored glasses are off and Evan was NEVER my person. I can't stress that enough."

In the end, it sounds like Temptation Island was the best thing for Kaci, Evan, and Morgan.