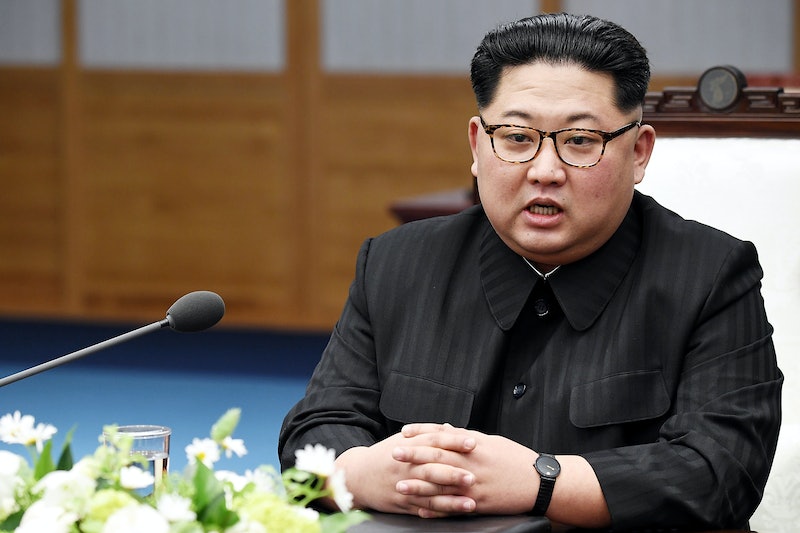 On Tuesday, North Korea's state news agency reported that the country could be considering canceling its upcoming historic summit with the United States on June 12. This recent announcement may leave you wondering what exactly North Korea's leader, Kim Jong Un, wants from Donald Trump. According to Vox, North Korean experts say it's likely that Kim is just trying to assert power ahead of the summit — and is unlikely to actually back out of the historic meeting.

As Vox reported, on Tuesday the Korean Central News Agency (which is run by the state) reported that North Korea was not pleased with the United States and South Korea for conducting a joint military drill, which the two countries began on Friday. These types of training drills are quite common, as is North Korea's opposition to them. However, the Korean Central News Agency appeared to issue a stern warning regarding the exercise in its statement released on Tuesday, saying,

The United States will also have to undertake careful deliberations about the fate of the planned North Korea-US summit in light of this provocative military ruckus jointly conducted with the South Korean authorities.

As CNBC reported, following North Korea's comments, White House Press Secretary Sarah Huckabee Sanders issued a statement noting that the Trump administration was looking into the issue. "We are aware of the South Korean media report," Sanders said. "The United States will look at what North Korea has said independently, and continue to coordinate closely with our allies."

Moreover, as CNN reported, State Department spokeswoman Heather Nauert also said on Tuesday that, as of now, the United States is planning on proceeding with both the military exercises and the summit as planned. As Nauert noted during a press briefing:

We have not heard anything from that government or the government of South Korea to indicate that we would not continue conducting these exercises or that we would not continue planning for our meeting between President Trump and Kim Jong Un next month ... This news just came out. We need to verify it to get additional information on that but we're going forward in planning our meetings next month.

While North Korea's warning regarding potentially pulling out of the summit in light of the U.S.-South Korean military exercises may sound ominous, many experts believe that the threat simply constitutes a classic North Korean negotiating strategy — and that the summit will very likely still proceed.

As Vox reported, Ankit Panda, a North Korea expert, characterized the warning from North Korea as a type of "diplomatic brinkmanship" being initiated by Kim, who likely wants to test Trump to see how much he wants to proceed with the summit — and if Trump is willing to give up anything, like the military exercises, to ensure it happens. But, as the outlet noted, regardless of the warning, it's extremely unlikely that Kim would actually cancel the summit, considering that getting face time with an American president has been a long-held goal of the North Korean regime.

Along these lines, Anthony Ruggiero, a senior fellow at the Foundation for Defense of Democracies, told CNN that North Korea's warning simply represents a way for Kim to see if he can get anything before the meeting takes place. As Ruggiero asserted,

North Korea's actions today are not surprising. They come straight from the Kim Jong Il playbook on negotiations: Raise expectations of a diplomatic breakthrough, cancel/suggest Pyongyang might cancel the meeting and then push for more concessions to have the meeting.

Finally, the New York Times also reported similar sentiments among Korea experts, saying that the country's warning about the military exercises was likely not going to prevent the upcoming summit from occurring. However, Victor Cha, a Korea expert from Georgetown University, told the paper that the warning could mean that the military exercises are something that will be up for discussion during the summit.

Overall, it appears that Kim seems to be testing Trump with North Korea's warning about the fate of the North Korea-U.S. summit slated for June 12. Nonetheless, it seems very likely that the summit will still take place. Many around the world will be watching to see if Kim continues to issue demands ahead of the summit — and to observe if and how Trump responds to them.