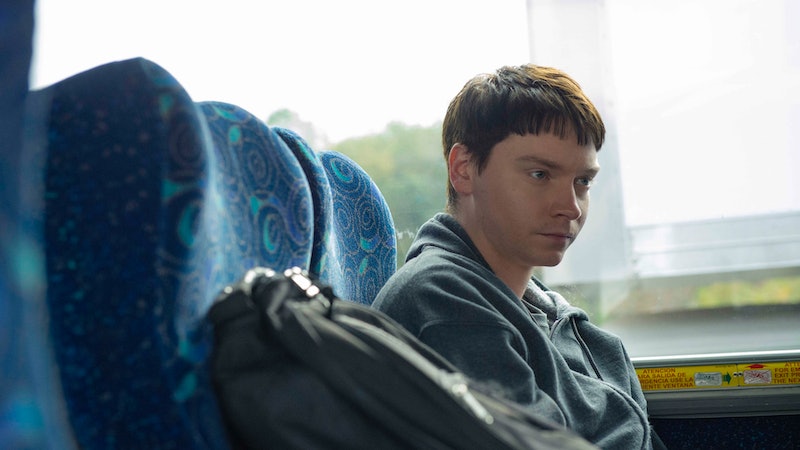 Hulu's true crime series The Act, based upon the real-life story of Gypsy Rose Blanchard and her mother Dee Dee's tense relationship, has riveted audiences since it premiered in March. In the April 3 episode of the show, Gypsy Rose met Nicholas Godejohn, who went on to become Gypsy's boyfriend. But the real Godejohn thinks The Act "may have slandered" his name, he says in a statement to Bustle. When reached by email, he said:

"As for the Series the Act I can't comment on it truthfully because I've never seen it and well quite Frankly They never talked to me about making it so they may have slandered My name for it was without My Permission. That's all I can say about that."

Bustle reached out to both Hulu and co-producer Michelle Dean's rep regarding Godejohn's comments, but did not immediately hear back.

Godejohn is currently serving a life sentence for the first-degree murder of Gypsy's mother Dee Dee in 2015. Blanchard is serving a 10-year sentence in prison after pleading guilty to the second-degree murder of her mother, which she planned with Godejohn after they met online and began a romantic relationship. Gypsy Rose had been under the care of her mother for several illnesses, but doctors now believe that Dee Dee suffered from Munchausen by proxy, according to ABC News, and the condition would have led her to fabricate her daughter's age, as well as claim that Gypsy had several illnesses she did not have.

Even though it seems that the real-life Godejohn and Gypsy Rose haven't seen The Act, Calum Worthy, the actor playing Godejohn in the show, says portraying Godejohn authentically was important to him. Worthy told BUILD series that he did a lot of research in preparation for the role, including consulting with an autism center. According to the Springfield News-Leader, Godejohn's autism spectrum diagnosis was used as a defense at his trial for the reasoning behind why he may not have comprehended what he was doing by killing Dee Dee. "I felt like I had a lot of pressure to make sure I was accurate in the performance, because [Godejohn] is on the spectrum of autism and I wanted to make sure that I represented that in an authentic way," Worthy said.

Calum also told CBS Local, "I wanted to paint him in a way that showed he's a complex human and there's a lot of layers to him ... not saying that the crime wasn't horrible, but that he's a human after all," he said.

As it turns out Godejohn's family is reportedly working on a separate show from The Act about the Dee Dee and Gypsy Rose Blanchard case. Screenwriter Franchesca Macelli, who's working on a series called By Proxy, told the Springfield News-Leader, "At this point, I have the legal life rights to [Gypsy and Dee Dee's] story, and I'm the only person who has the official story from all sides, and I'm even working with the Godejohns at this point." But, there has yet to be confirmation from Godejohn or his family about any involvement in another series.

It's to be determined whether or not Godejohn will ever see The Act or be involved with a future project on the case, but his thoughts on the current miniseries are pretty clear.