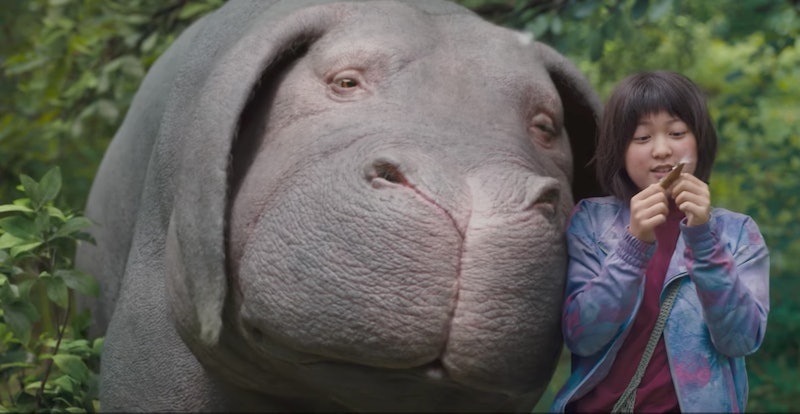 Netflix's Okja is being lauded as an innovative multicultural film with many important, messages, some unmistakable and some subtle. Because the movie is in both Korean and English and it is primarily set in South Korea and New York City, one of its most prominent themes is that the world is shifting towards global unity, for better or worse. Some of the jokes and references in Okja are more resonant with American viewers, while others resonate with Korean viewers — and one specific joke in the film translates only for those who speak both Korean and English. The symbol-heavy film is filled with translations and allusions, however, what Okja means (whether in the movie's title or as the name of the giant superpig) is actually much more simplistic.

In an interview with Deadline, Okja's director, Bong Joon-ho, revealed that Okja is just a name. "Actually, it has no meaning. It is a female name in Korea, but it’s a little outdated. Not many kids have that name now. It’s like Margaret," he said. Perhaps the director called its main character an outdated name because the rest of the film is so futuristic, or maybe he simply felt it was a nice, if old-fashioned, moniker.

While the meaning of the word "Okja" is not essential in the film's plot, an error in translation does impact a certain storyline, which reinforces the film's theme that a globalized world requires understanding between one another (and not just literally).

That's not the only central message of Okja, however. The film also has a strong point about the treatment of animals and the meat industry. Although Okja is a fictitious monster, it has familiar animal-like qualities that create an emotional attachment with the character. It may look a little bit creepy, but that in itself could be another message of the film, because this unfamiliar-looking beast is the least scary and threatening being in Okja. Not everything is as it seems in the film, which is part of what makes it so gripping.