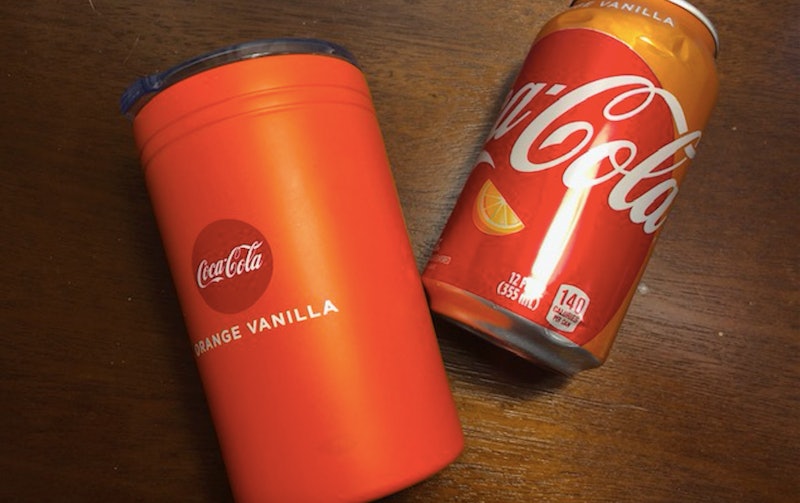 On Feb. 8, Coca-Cola announced something huge: Orange Vanilla Coke is on the way — and it’s arriving a lot sooner than you might think. The brand-new cola flavor will hit shelves on Feb. 25, just in time for the fast-approaching arrival of spring. And hey, guess what? For those who might be wondering exactly what Orange Vanilla Coke tastes like, good news: Coca-Cola kindly granted me the opportunity to try it, so I’ll do my best to answer whatever questions you might have.

Orange Vanilla Coke made waves when it was announced for one big reason: It’s reportedly the first new Coke flavor to arrive in over a decade. But wait, I hear you ask — a full decade? Really? What about, say, those wacky fruit flavors that joined the lineup last year and just got an expansion in January? You know, that Blueberry Acai and Strawberry Guava stuff? Aren’t those new flavors, too?

I mean, yes, they are — but they’re specific to Diet Coke. Similarly, the Georgia Peach and California Raspberry flavors that launched in 2018 are a line all their own — Origins — rather than part of the regular Coke and Coke Zero Sugar flavor lineup. The only permanent flavors available in the standard Coke/Coke Zero Sugar line up until now have been Cherry, which was introduced in 1985, and Vanilla, which had its original run from 2002 to 2005 before being relaunched in 2007.

But now, Orange Vanilla Coke has joined the Coke and Coke Zero Sugar ranks — and it looks like it’s planning on sticking around. It doesn’t hit shelves until the end of the month; however, I was lucky enough to get the chance to taste the new flavor in advance of its official arrival, so if you’re wondering what the stuff actually tastes like, I might be able to help you out with that.

In its canned form, Orange Vanilla Coke utilizes the same design that the standard Coke line has used since 2016: The logo is large, the center of the can is red, and an arc of a contrasting color — in this case, orange (naturally) — frames the outside edge. The soda itself also looks like you’d expect Coke to look — fizzy and a warm, caramel-brown color. It doesn’t have a wildly different smell than other Cokes do.

The flavor, though? That’s certainly different. And hey, guess what? If you, like me, heard the phrase “Orange Vanilla Coke” and thought, “That sounds kind of like a Coke-flavored Creamsicle”… you’d be absolutely right.

It does taste like a Creamsicle — but not like, say, Stewart’s Orange ‘N Cream soda does. Rather, Orange Vanilla Coke tastes like a cola-spiked Creamsicle. Like, if you poured yourself a glass of Coke, stuck a Creamsicle in it upside-down, let it melt a bit, and then either A) took the Creamsicle back out and ate it, B) drank the Coke now mixed with melted Creamsicle, or C) both? That is exactly what Orange Vanilla Coke drinking this stuff is like. What’s more, the combination of cola and Creamsicle isn’t as weird as it might sound; because of the vanilla, it actually works. Think of it like a Coke float, just with something like orange sherbet instead of a more “standard” ice cream flavor.

“We wanted to bring back positive memories of carefree summer days,” Coca-Cola brand director Kate Carpenter said of the new flavor in a press release. “That’s why we leaned into the orange-vanilla flavor combination — which is reminiscent of the creamy orange popsicles we grew up loving, but in a classically Coke way.” I think it’s safe to say that they’ve reached that goal; given that both my initial impulse and deeper assessment hinged on comparing the drink to liquid Creamsicles… mission accomplished.

Will Orange Vanilla Coke be your jam? Only you can answer that question. It is quite sweet, even for a soda, so if you’re not a fan of sweet drinks, or only like them in very small doses, you might not be rushing to try this one; similarly, if you just, y’know, aren’t an orange and/or vanilla kind of person, you’ll probably want to skip Orange Vanilla Coke. But if you, like Kate Carpenter, grew up as a devotee of creamy orange popsicles, give this one a shot when it hits shelves; it’ll be perfect for picnics when the weather starts to warm up, and until then, it can remind you of the brighter, fruit-filled days to come as we see out the last of winter’s gloom.