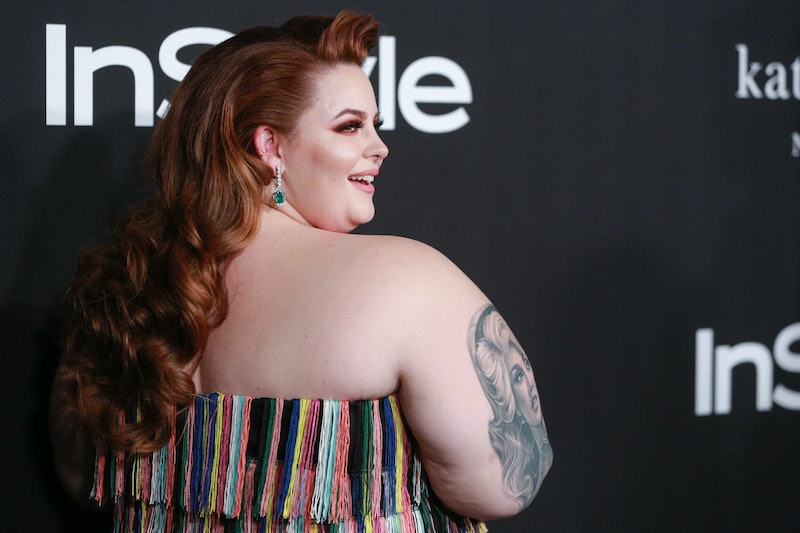 For many LGBTQ+ people, the act of verbalizing your identity can come as a huge emotional relief. Pansexuality, like every LGBTQ+ label, is defined differently depending on who you ask, but queer advocacy organization GLAAD broadly defines being pansexual as “being attracted to all gender identities, or attracted to people regardless of gender.” Still, there are pervasive myths about what pansexuality means, and it's important to recognize why they're so misleading.

Over the last few years, several celebrities have come out as pansexual, raising awareness about the identity and what it means. And recently, another celebrity has been welcomed into the public pansexuality fold: joining agender rapper and singer Angel Haze and singer, songwriter, and producer Janelle Monae, 33-year-old model Tess Holliday came out as pansexual in an interview with NYLON magazine for its July 2019 digital issue.

Holliday relayed her coming out story as a hilarious misunderstanding. She told NYLON that she talked through her relationship with queerness, saying that the word pansexual “speaks to” her, before realizing that the person she was explaining this to asked “are you buying something” rather than “are you bi.” (We’ve all been there, Tess.)

Sure enough, an anonymous 25-year-old nonbinary pansexual person tells Bustle that they started liking the term pansexual for themself when they were coming to terms with their gender and with the fact that they were crushing on their best friend (a queer classic in some TV storylines). They say that the term pansexual spoke to them because choosing to embrace it “helped my coming out process.”

But despite the rise in knowledge about what pansexuality means, damaging myths about it still exist, and these myths have the potential to harm the coming out experiences of too many people. Here are five myths about pansexuality and why they're so damaging to pansexual people.

More like this
25 Inspiring Quotes From Black Women To Celebrate Black History Month
By Kyli Rodriguez-Cayro and JR Thorpe
24 History-Making Black Women You Probably Didn't Learn About In School
By Ayana Lage and JR Thorpe
These Artists Are Reimagining Black History Month To Create A Better Future
By Katie Mitchell
15 Black-Owned Liquor & Wine Brands To Add To Your Bar Cart
By Alexis Morillo
Get Even More From Bustle — Sign Up For The Newsletter
From hair trends to relationship advice, our daily newsletter has everything you need to sound like a person who’s on TikTok, even if you aren’t.