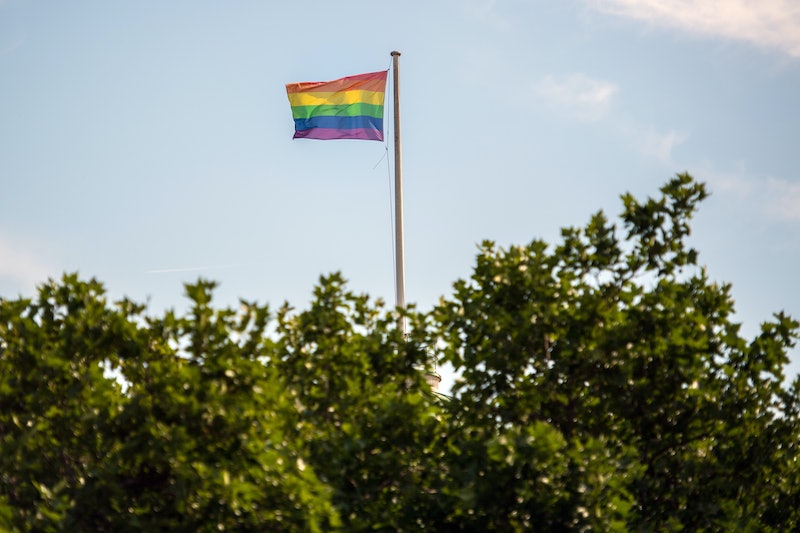 You likely know what LGBTQ stands for, but by many measures, those labels — lesbian, gay, bisexual, transgender, and queer – are being complemented by a vast score of non-traditional sexuality labels. Consider labels like asexual, demisexual, or pansexual — the latter of which means you're attracted to people regardless of their gender, April Masini, relationship and etiquette expert for the Relationship Advice Forum, told Bustle for a previous article. For some people, the label pansexual overlaps enough with bisexual — meaning being attracted to more than one gender — that using it can feel like bi erasure; others feel like pansexual is a more inclusive label than bisexual. But both labels are more complicated than that. The bisexual versus pansexual debate has been an ongoing conflict within the LGBTQ community for years, but advocates say the dispute over the two valid labels doesn't actually help anyone.

LGBTQ activist, educator, and speaker Robyn Ochs tells Bustle there’s no single, universally accepted definition for any sexual identity, including bisexuality and pansexuality. But the concept of pansexuality can be traced back to psychoanalyst Sigmund Freud in the 1900s, according to Psychology Today. When Freud referred to pansexuality, it was quite different than how the term is used today. Freud defined pansexuality as "how sexual energy and desire is the basis for all human interaction in life," according to The Center for Sexual Pleasure and Health. Either way, pansexuality is not this new, “trendy” identity many people think it is.

Today, the way people use the term pansexuality has changed, and how celebrities like Miley Cyrus describe their pansexuality is essentially what scholars and sociologists say is the contemporary interpretation of the identity: "I am literally open to every single thing that is consenting and doesn't involve an animal and everyone is of age,” Cyrus said in an interview with Paper Magazine. “I don't relate to being boy or girl, and I don't have to have my partner relate to boy or girl."

In other words, someone who is pansexual is typically attracted to other people regardless of their gender, Amanda Chatel wrote for Bustle. The origins of the term bisexuality, however, are much more complicated, but Bisexual.org says today bisexuality describes people whose attractions are not limited to one gender.

Ochs tells Bustle this is how she defines bisexuality: “I call myself bisexual because I acknowledge in myself the potential to be attracted, romantically and/or sexually, to people of more than one gender, not necessarily at the same time, in the same way, or to the same degree." Ochs differentiates bisexuality from pansexuality by using the Greek root meaning for “pan,” which means “all.” “I think of panoramic attraction,” says Ochs. “Attraction across a broad spectrum.”

If the definitions of the two sexual identities seem like they overlap, that’s because some people think they do, but some people think they don’t. And that’s just the start of the debate. What's also at the root of the bisexual versus pansexual conflict is that for years, bisexual people have been battling the myth that bisexuality is not inclusive of transgender and nonbinary people, as Bustle writer Kyli Rodriguez-Cayro wrote. Many people have taken the "bi" in bisexual and stripped it down to its etymological root to mean "two" — as in, attraction to only two genders — but the cultural meaning of bisexual has expanded well beyond the root meaning.

Heron Greenesmith, a progressive policy attorney and bisexual-pansexual advocate, tells Bustle that misconceptions about bisexuality have impacted people’s adoption of the bisexual label. “It is my belief that some people hear stereotypes about bisexuality before they hear affirming statements, and if they are non-monosexual, those harmful stereotypes might impact how they identify,” Greenesmith tells Bustle. “I have a theory that young people who hear these stereotypes may want to avoid appearing transphobic — which is a good instinct — and also may fear association with the thousand other stereotypes that people share about bisexual people, and, thus, may choose to identify with another label under the non-monosexual umbrella.”

And that other label is often pansexuality. But some people who identify as bisexual feel the adoption of the pansexual label can perpetuate these misconceptions about bisexuality. But Ochs tells Bustle that people identify as pansexual for a variety of reasons, whether it's because they truly do misunderstand the term bisexuality, because they simply prefer the identity, or because they like and use more than one word. Ochs is one of those people who prefers to use multiple labels; she says she identifies as bisexual, pansexual, and queer.

Both Ochs and Greenesmith tell Bustle it’s time to stop pitting the two identities against each other, because all that's doing is hurting people who are just trying to live and love within the same community. Both labels are valid to the people who use them to identify their sexualities. It's time to stop using them as tools of oppression and erasure.

“I sincerely hope that we refrain from responding to our own hurt and erasure by inflicting pain on other marginalized people,” says Ochs. “Rather, let us understand the dynamics and systems of oppression that cause this pain, work to challenge and dismantle these systems, and heal ourselves and support others who have been harmed. Bi and pan folks: let’s work together to hold open the space between and beyond the binary.”

"If we throw out pansexual people because of a myth about bisexuality, we are throwing out our own community," Greenesmith tells Bustle. "I refuse to be complicit in further pain our community experiences. [...] Why would I fault someone for trying to avoid the biphobia I face every day? Instead, my goal is to protect all non-monosexual people from the violence, bias, and discrimination we all face and build solidarity and strength to remedy our disparities."

These labels continue to change and evolve as the people using them do. The biggest thing to remember is that we're all in this together, and everyone's identity is just that — their valid identity.

More like this
31 Ways To Celebrate Valentine's Day With Your Long-Distance Love
By Natalia Lusinski and Carolyn Steber
5 Signs You Have A Toxic Relationship With Yourself
By Lexi Inks
Gen Z Are Twice As Likely To Identify As Queer, According To New Data
By Sam Ramsden
The 3 Zodiac Signs Most Likely To Get Married Later In Life
By Kristine Fellizar
Get Even More From Bustle — Sign Up For The Newsletter
From hair trends to relationship advice, our daily newsletter has everything you need to sound like a person who’s on TikTok, even if you aren’t.