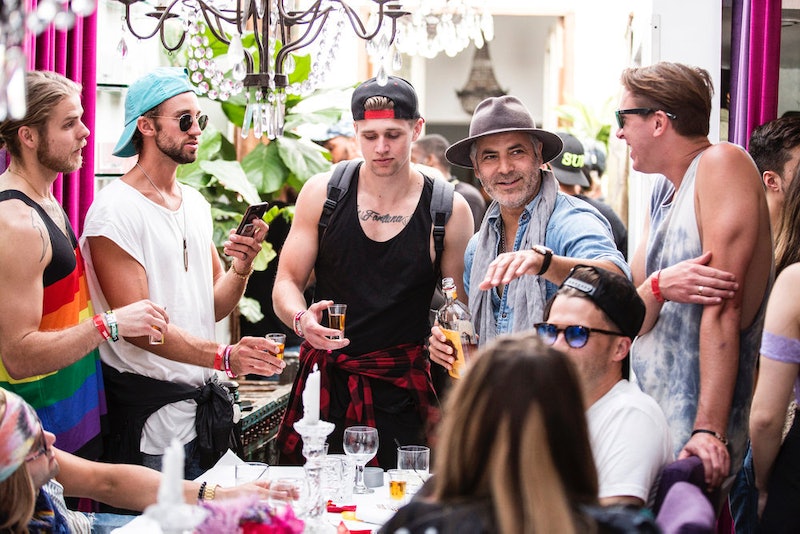 For every “say what” moment that Vanderpump Rules has produced over its six seasons, most have at least made sense. But the now-infamous “it’s not about the pasta” fight in Vanderpump Rules Season 6 is definitely raising some eyebrows, not for James’ dedication to ensuring his girlfriend eats her share of carbs (which is, frankly, the level of carb-importance I’m looking for in all of my relationships), but for what Twitter seems to think is a thinly veiled alternative meaning. What does "pasta" mean for Vanderpump Rules?

Anecdotally, in my three decades of living on Earth and in the past, oh, 10 years of going out and attending parties and the like, I can attest that I’ve never heard “pasta” used in a way other than meaning the delicious gluten-y noodles that I top with pesto and cheese and a smidge of good olive oil like I’m Ina Garten. But it was perplexing when James and Lala had a fight at lunch last week, because Lala was joking about finishing James’ girlfriend Raquel’s pasta dinner when they were all out somewhere, and James wasn’t having it. He exclaimed that it wasn’t about the pasta, necessarily — it was that Lala and Logan, James’ other bestie, felt comfortable enough to polish off Raquel’s plate. For James, it’s a respect thing. They should respect him enough not to eat off his girlfriend’s plate, even though Raquel offered up the remnants of her meal to Logan and Lala. Yes, this is ridiculous, and yes, James screamed, “it’s not about the pasta!” roughly 40 times.

After the episode aired, the internet was flush with comments speculating that the fight between James and Lala wasn’t about cavatappi, but something a bit more illegal. According to Twitter, pasta could be the Vanderpump crew's code word for drugs.

Could James and Lala's fight really have been about something other than dinner? Well, Twitter wasn't sure.

Many Were Confused By The Whole Thing

Some Thought It Made Perfect Sense

These people see more than meets the eye.

And Others Weren't So Sure

There were, of course, skeptics.

Several cast members from Vanderpump Rules have come out and publicly denied that Lala and James were referencing anything besides spaghetti during their argument. Ariana shot it right down.

Kristen Doute made a joke about it.

And James insisted that he was talking about linguini, too.

Villa Blanca, one of Lisa Vanderpump's other restaurants, made a joke about it in a tweet shortly after the controversy began.

Bad press is better than no press, yeah?

A quick spin through UrbanDictionary.com for the word "pasta" turned up a few very different definitions. One was for pasta as it's colloquially known: food. Another definition of pasta was marijuana, one says it means alcohol, and one claims it's a code word for sex. For you OG internet users, another definition says that pasta is a shorter way of saying "copy-pasta." What does that mean? Per the site: "Usually used by someone who has been around long enough to wear out the term 'copy-pasta.' Pasta is usually employed by people who are not creative enough to think of their own material, but who would like to get the glory of posting something witty or funny." Not one user-submitted Urban Dictionary definition claims that "pasta" means coke.

The American Addiction Centers website lists a series of slang terms for cocaine. They include "coke," "blow," "big C," "dust," "line," "pearl," and "pump," and "pasta" is not on the list. That being said, there is something called "pasta base" that is a sort of cocaine relative. According to the BBC, "Pasta base, also known as cocaine paste or coca paste, is a by-product of processing raw coca leaf into cocaine. It is produced in Peru, Bolivia and Colombia, and appeared in Uruguay and neighboring Argentina during the economic crisis of 2002, offering momentary euphoria in desperate times." Pasta base is much, much cheaper than cocaine, and it's used in predominantly poorer neighborhoods as a cocaine alternative. Another BBC article describes it as being smoked. "It gives the user a rapid, intense high, but wears off quickly leaving him needing another fix, and another," the piece reads.