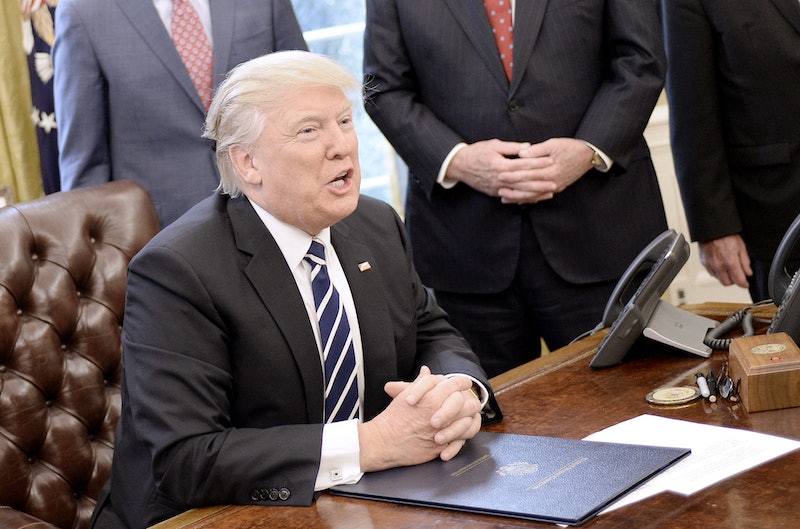 In a recent interview with the Economist, President Trump said that "priming the pump" is the best way to jumpstart the American economy. He used that phrase several times throughout the interview, and claimed that he "came up with it a few days ago" to describe his economic growth plan. Make no mistake about it: Trump wants to prime the pump. But what exactly does that mean?

To start with, Trump did not invent that turn of phrase. As the Congressional Record makes very clear, lawmakers have been using the phrase "prime the pump" to describe economic policies since at least 1935, and Merriam-Webster says that it dates back to the early 19th century. Moreover, Trump himself used the phrase in December, so he most definitely didn't come up with it "a few days ago."

In any event, "priming the pump" is when the government authorizes a relatively small amount of federal spending in the hopes of creating long-term, self-sustaining economic growth. As the New York Times noted, it's derived from a technique used to extract water from wells, in which a small amount of water is poured into a pump so that it's easier for the device to pump out water. The concept is generally associated with economist John Maynard Keynes, whose theories influenced President Roosevelt's New Deal in the 1930s.

In a practical sense, "prime the pump" can refer to any number of economic policies. For instance, authorizing new spending for new jobs training programs can produce higher employment, which ultimately increases consumer spending and boosts the GDP. Investments in infrastructure might make it easier for manufacturers to transport raw materials, thus increasing profits and efficiency in the long term, while extending unemployment benefits can prevent workers from falling into poverty and dropping out of the economy entirely. The basic idea is that by spending a little bit of money upfront, the government can create more wealth for everybody.

Although the term generally refers to progressive economic policies, Trump used "prime the pump" in reference to cutting taxes, mainly for corporations. Although this is a less conventional usage, it does fit the general definition: Cutting taxes for corporations increases the deficit, which could be considered new spending, and proponents of supply-side economics argue that lower tax rates for the rich ultimately increase growth throughout the economy. However, that's an extremely controversial claim among economists, and there's strong evidence to suggest that cutting corporate tax rates doesn't necessarily boost the economy.

Trump, though, evidently believes otherwise. And that's why he wants to "prime the pump."