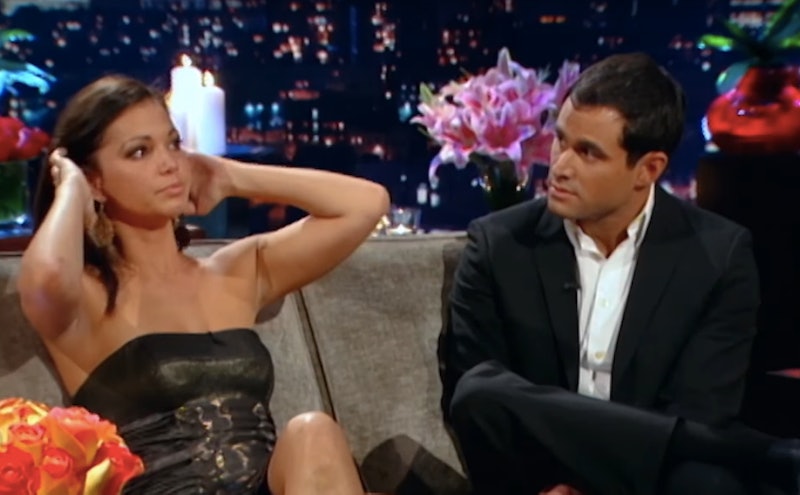 To put it nicely, Arie Luyendyk Jr.'s Bachelor season has not been the most exciting one to watch, but when it came to the ending, it was one of the most shocking in Bachelor history. Arie chose Becca Kufrin and proposed, but he broke up with her for runner-up Lauren Burnham. In Bachelor terms, Arie's move is called "pulling a Mesnick."

Longtime viewers of the show know exactly what that means, but for anyone in need of a refresher, here is where the phrase comes from: Jason Mesnick was the lead on The Bachelor for Season 13. During the finale episode, he proposed to Melissa Rycroft. But, after the season ended, he realized that he wasn't over his runner-up Molly Malaney. So, he broke up with Melissa during the After The Final Rose special so he could start dating Molly.

This is not exactly what Arie did, since he went back on his decision before taping the After The Final Rose special, but both Bachelors did blindside their original choices with a breakup in front of a reality TV camera crew.

Interestingly enough, Jason is one of two Bachelors in the past 21 seasons who is still with (and married to) someone from the show. (The other is Sean Lowe, who is expecting his second child with his wife Catherine Giudici.) It was hard not to sympathize with Melissa and villainize Jason, but clearly he ultimately made the right choice since Jason and Molly have now been married for eight years and have a daughter together.

In a 2009 interview with with The Los Angeles Times, Jason commented on his change of heart, and said, "I don’t know if the public expected me to just pretend like I’m in a good happy relationship. I mean, is that what people really wanted to see? Because that was the other option, but never a real option for me."

Even though the Mesnicks are very happy these days, they received a lot of backlash back in the day. Jason reflected on the Bachelor backlash in a 2017 interview with The Huffington Post. He admitted, "Molly and I were just devastated. I remember this cover of People magazine came out and it said something like — Bachelor Betrayal — and we were just hidden in our hotel room in LA for two or three days because we just didn’t want to go out.”

Jason wasn't the only one to face criticism. In a 2009 interview with Access Hollywood (via Today), Molly explained her side of the story, "I think the time for me when people have been negative is when like a girl — her boyfriend just broke up with her and they just look at me like it’s my fault." She insisted, “I’m sorry if you feel that way, but it’s not me! It happens every day and it wasn’t me, I promise. I didn’t put him up to it.”

Jumping back to this modern day Mesnick 2.0 situation, everyone feels for Becca after watching that breakup, so it is expected that Arie (and even Lauren) will received backlash from The Bachelor fandom. Jason got a lot of hate when he changed his mind and this was all the way back in 2009. Social media has completely changed the way that people watch The Bachelor. There are so many viewers who live tweet the episodes each week, and even are so many recap shows and podcasts devoted to the series. It is just a completely different landscape than Jason and Molly had to deal with.

During the February 26 episode of the Ben & Ashley I Almost Famous Podcast, Sean Lowe addressed the then-rumors about this season's ending. At the 26:34 mark of the episode, Sean remarked, "The rumor that he kind of follows in Jason Mesnick's footsteps, if that's the case, then that's going to be pretty tough for Arie because I know Jason got raked over the coals when he did that."

Once the show came down to just Becca and Lauren, Arie said he loved both of them, but was obligated to the timeline of the show when it came to making a final decision. It is a tough time crunch to make decisions when there are strong feelings for multiple people, but it is impossible not to sympathize with Becca. She got engaged and dumped in a short period of time. Then she had to watch their "love story" on one of the most popular TV shows around. Not only that, but she was probably bombarded with social media comments about how she and Arie were a great couple as the season went on.

Nevertheless, Arie is following his heart. And even though he didn't act on his feelings in the best way, it's better to end a doomed relationship sooner rather than later. And you never know, Arie and Lauren might end up like the Mesnicks and live happily ever after.