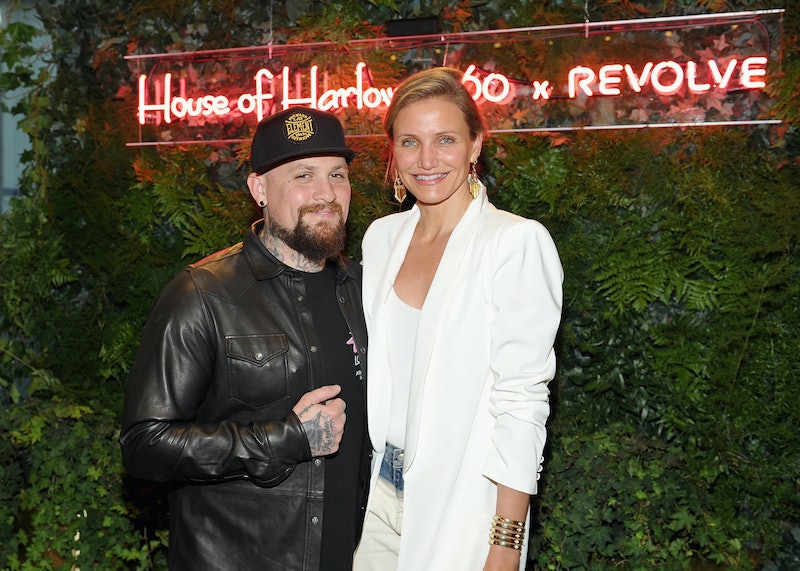 Cameron Diaz and Benji Madden are getting a very "rad" start to the new decade. In a celebratory New Year's Instagram post, Cameron Diaz revealed she and Benji Madden welcomed a baby girl together, who they named Raddix Madden. The actor shared the big news in a simple, text-only social media post, which she opened by wishing everyone a "Happy New Year" from the growing family.

"We are so happy, blessed and grateful to begin this new decade by announcing the birth of our daughter, Raddix Madden. She has instantly captured our hearts and completed our family," Diaz wrote in the post. However, while she and Madden were "overjoyed" with their new addition, Diaz also added that neither she nor her musician husband will be sharing any more details about baby Raddix, in order to protect her privacy.

"[We] feel a strong instinct to protect our little one’s privacy," Diaz wrote. "So we won’t be posting pictures or sharing any more details, other than the fact that she is really really cute! Some would even say RAD," she continued, adding a smiley face emoji alongside her pun on the new baby's name. The couple also declined to reveal why they decided on the name Raddix for their baby girl, although both made it clear that they are very happy to be new parents.

"From our family to all of yours, we’re sending our love and best wishes for a Happy New Year and Happy New Decade," Diaz concluded her post, which also shared by Madden on his own Instagram account. The pair's decision to keep details about their baby girl under wraps isn't surprising, as Diaz and Madden have kept much of their relationship out of the spotlight since they were first linked back in May 2014. The Good Charlotte guitarist reportedly proposed to Diaz shortly before Christmas of that year, and they tied the knot in January 2015.

"Getting married to him was the best thing that ever happened to me," Diaz told InStyle in August 2019, in a rare interview about her personal life. "My husband’s the best. He’s the greatest human being, and he’s my great partner." Though she admitted that "marriage is certainly hard," Diaz feels that she and Madden have a strong partnership that has made her happier than ever. "I don’t know if I was ready [when I got married], but I knew Benji was special," she explained. "He’s just a good man. There’s no bullsh*t. It’s really refreshing. I’m really grateful for him."

In a 2012 interview with Redbook, Diaz revealed that she decided to wait to become a mother until later in life after seeing the way that her career took off when she was young actress. "I thought I was going to be married and have two children by the time I was 21." she said at the time. "But then my career was starting to take off and there were still so many things I wanted to do. ... After that, I never put another timeline on anything in my life."

It seems like the decision to wait was the right one for Diaz, as she also admitted during a 2017 at the “In Goop Health” wellness summit that she was grateful to have waited until the age of 42 to get married to Madden. "I think it’s a matter of I just hadn’t met my husband," she said at the time. "I had boyfriends before, and there’s a really, really distinct difference between husbands and boyfriends." Now that she has a "partner" in Madden and a new baby girl, it looks like Diaz is ready to head into the upcoming decade as a proud new parent.