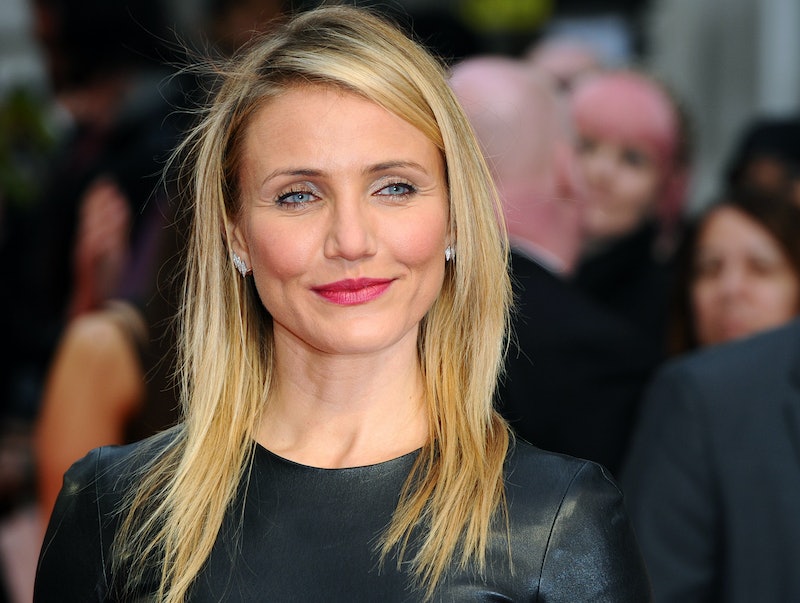 While you were obliviously nestled in with a bowl of macaroni and cheese late Monday afternoon, Cameron Diaz married Good Charlotte's Benji Madden. It was a fairly low-key ceremony that went down in their LA home. All this follows a December engagement (although rumors were swirling as early as October). We can't help but immediately begin to fantasize what Diaz and new, hilarious sister-in-law Nicole Richie likely exchanged for Christmas. But that's beside the point!

Although Diaz is now legal wed, we can't see that changing the fact that she will always be The Ultimate Single Lady. Who else has a richer track record of being an independent boss bitch—including both ups and downs; the kind of stuff that makes you even stronger. Diaz first burst on the scene in 1994's The Mask, as a the red-hot vixen with a tendency to skip over the morning's weather forecast. She matured three years later with a more complex part as the preppy, mildly delusional Kimberly Wallace in My Best Friend's Wedding. And of course, there was her flawless, titular role in There's Something About Mary. Before too long, she scored her very own star on the Hollywood Walk of Fame.

Accomplishments like that don't magically occur. They take a lot of hard work. On top of a seemingly endless hustle, Diaz has the brains and balls worthy of hardcore admiration. Which is why we're paying homage to the bodacious blonde herself today—The Ultimate Single Lady.

She's smart about her body

In her empowering 2013 health guidebook, The Body Book: The Law of Hunger, the Science of Strength, and Other Ways to Love Your Amazing Body, she made heaps of good points. Among them, she dedicated an entire chapter to make all the waxing and laser-removal parlors shiver in their hairless shoes. It's called "In Praise of Pubes," and here's a radical excerpt:

I hear that there’s a big fad these days of young women undergoing laser hair removal on all of their lady bit... Personally, I think permanent laser hair removal sounds like a crazy idea. Forever? I know you may think you’ll be wearing the same style of shoes forever and the same style of jeans forever, but you won’t. The idea that vaginas are preferable in a hairless state is a pretty recent phenomenon, and all fads change, people

She doesn't give a damn about social norms in dating

She'll date whoever she freaking wants, OK? Madden, Diaz's now-husband, is seven years her junior. Before that, she famously dated Justin Timberlake for four years until splitting in 2007. With JT, there was a nine year age difference. Diaz rolled her eyes at criticism (as she should) when W brought it up in a 2004 interview. "It's not like this is the first time in the history of human relationships that people were drawn to one another because of who they are, not what age they are," she says.

She sticks up for her friends

Diaz and Charlie's Angels co-star Drew Barrymore have been BFF for eons. Diaz even considers herself aunt to Barrymore's children. So when radio host Jackie O tried to make a jab at Barrymore's "drug years" during an interview over the summer, Diaz cut zero slack and dipped out of the segment early. That's right, girl.

She preaches that sexuality is fluid

In an interview last year, Diaz dropped a candid statement that—let's be real—holds true for a lot of women: "All women have been sexually attracted to another woman at some point." Unfortunately, though, many publications jumped on this quote and immediately began speculating as to whether or not her words implied that she has bedded BFF Barrymore. Her response to Harper's Bazaar? "Literally, that makes me want to vomit in my mouth." Obviously this is more of a reflection on the two's sibling-like bond and not Barrymore's appearance. Regardless, Diaz is not here for everyone's DOES SHE LIKE MEN OR WOMEN WHICH ONE CHOOSE ONE ONLY PLEASE line of questioning about her sexual habits.

She's cool as hell about getting older

Diaz is 42, aka, far from Old Lady Status. However, in Hollywood, everything is little warped and 42 can mean something different. "Our culture is obsessed with not growing into who you were really meant to be," she says during a chat with Oprah Winfrey last spring. "For me I feel like if I—it's almost as if we have failed if we don't remain 25 for the rest of our lives. Like we are failures. It's a personal... failure. Like our fault that at 40 years old that I still don't look like I'm 25." Instead, she says she focuses on staying healthy with both her diet and exercise—a practice surely all ages could benefit from.

She has incredible strength and will power

The actress has wild dedication to herself and her own word. That strength armed her to successfully go from smoking about 20 cigarettes a day to zero. And that wasn't even until she was already in her 30s. No nicotine gum, no hypnotherapy—just her own drive. Dedication, for sure. Not that there is anything wrong with using any kind of safe aid to help you do something awesome like quit smoking, but damn—you gotta love a woman who just gets that shit done.

She worked her ass off to get where she is—and she isn't resting, still

Diaz didn't score an A-List spot in Hollywood by accident. She never said success should or does come easily and sans effort. It 100 percent comes down to discipline, she says. In The Body Book she gets downright frank about her hustle:

At the core of every successful person there is one common thing: discipline. When I think how I define success in my life, I know that strength is important to me and being capable is important to me and feeling good is important to me. I could not achieve any of those things without being disciplined! Everything I have comes from discipline. I do what I do because I make myself do it—every day—whether I’m working on a film or on a break between projects. Because my work is not just my job: my work is all the things that I need to do in order to create the life that I want to live.