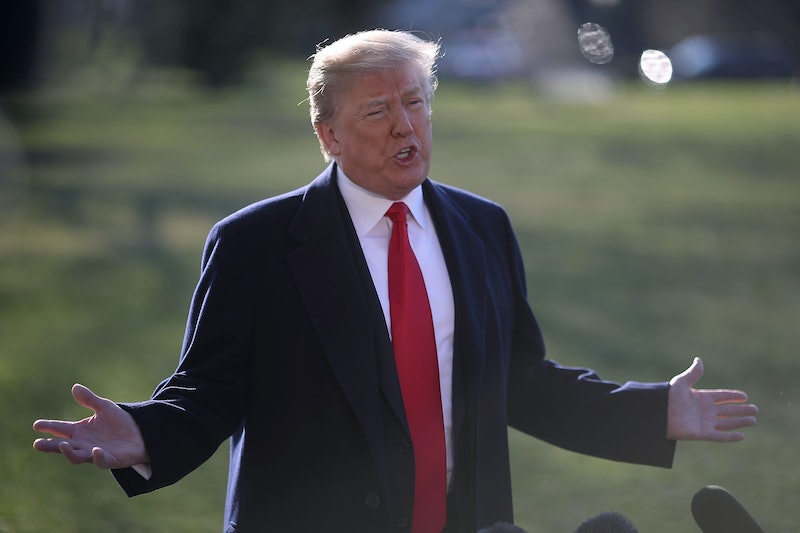 In announcing an end to the long government shutdown on Jan. 25, President Trump suggested that he wants border wall funding to go toward creating "smart walls." In light of the president's remarks, many Americans might be wondering what a smart wall means. Trump's border security comment implies that the administration is now more inclined to enhance border technology instead of erecting a lengthy barrier between the United States and Mexico.

Trump described his vision of a smart wall during his Rose Garden remarks on Jan. 25. The president emphasized to reporters that a smart wall would feature modern technology to assist border officials in carrying out their duties. As the president noted:

The walls we are building are not medieval walls. They are smart walls designed to meet the needs of frontline border agents, and are operationally effective. These barriers are made of steel, have see-through visibility, which is very important, and are equipped with sensors, monitors, and cutting-edge technology, including state-of-the-art drones.

Trump also emphasized that his administration wasn't interested in building a concrete barrier along its southern border. "We do not need 2,000 miles of concrete wall from sea to shining sea — we never did; we never proposed that; we never wanted that ...," Trump said in his remarks. The president also emphasized that " ... we [the United States] have barriers at the border where natural structures are as good as anything that we can build. They’re already there. They’ve been there for millions of years."

Notably, as CNBC reported, rhetoric regarding a smart wall seems to have originated with a Democrat, U.S. House Majority Whip James Clyburn. The Majority Whip implied that the only way Democrats would consider meeting Trump's request for increased border security funding is through funds targeted for technological enhancements to border security, not a barrier. As Clyburn said after a Democratic caucus meeting on Jan. 23 (via The Hill):

Using the figure that the president has put on the table, if his $5.7 billion is about border security then we see ourselves fulfilling that request, only doing what I like to call using a smart wall. These are the types of things that we are going to be putting forward [when negotiating a spending deal].

As the New York Times reported, Trump's vision for a border wall has varied extensively. The paper documented his remarks on the issue from 2015 onwards, showing that Trump has repeatedly vacillated on how long he thinks the wall should be, what it will be made of, and who will pay for it, among other topics. His smart wall comments seem to represent his newest vision for how the border wall may come to fruition.

Congress is currently engaged in renewed discussions about potential border wall funding ahead of Feb. 15 — the date on which the stopgap spending bill passed on Jan. 25 to reopen the government will expire. As the New York Times reported, Trump suggested that he will not sign a new spending bill that doesn't include funding for enhanced border security. The president noted that he's willing to shut down the federal government again or declare a national emergency in order to ensure that his border funding is secured, the paper noted. It remains to be seen whether Democrats will ultimately decide to support this border security funding via a "smart wall" allocation in the spending bill.