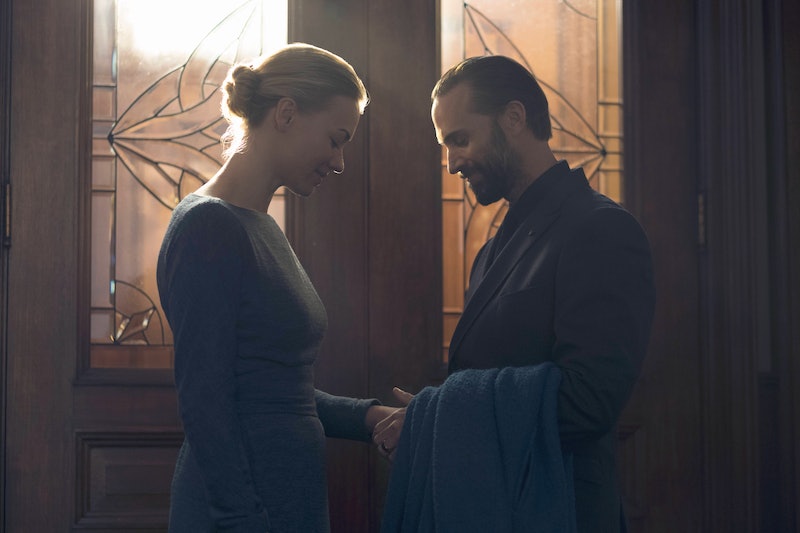 Extremist Christian doctrine is the name of the game in The Handmaid’s Tale, and everything in this new world is taken from the Bible — the reasons, the references, the garments, the punishments, the greetings, etc. Gilead was the United States as we know it until a Christian fundamentalist group called the Sons of Jacob took over the country. But what does Sons of Jacob mean on The Handmaid’s Tale?

It all goes back to the Bible. Before every “Ceremony” — that is to say the monthly evenings where Handmaids like Offred are raped in an effort to force them to bear children — a passage from Genesis is read to the whole household, specifically Genesis 30:1-3. This passage is where the whole idea of the Handmaids begins, and it’s why this ceremony of fertile women giving children to the barren wives exists. It reads, “And when Rachel saw that she bare Jacob no children, Rachel envied her sister, and said unto Jacob, 'Give me children or else I die.' And she said, 'Behold my maid, Bilhah. Go unto her and she shall bear upon my knees so that I might also have children by her.' And she gave him Bilhah, their Handmaid, to wife, and Jacob went unto her.”

The gist is this — in the Old Testament, Jacob went to stay with his uncle Laban, and while there he fell in love with Rachel, his cousin. Jacob asked Laban for her hand in marriage, and Laban said that Jacob could marry Rachel if Jacob worked for Laban for seven years. After seven years passed, the wedding day was there… but Laban tricked Jacob and made him marry Rachel’s older sister, Leah, instead. Jacob didn’t notice this until the following morning, after the marriage was consummated (I don’t know how he didn't notice, but OK), and because they were already married, Jacob had to stay with Leah. He could, however, marry Rachel after another seven years. Leah bore Jacob many children, but Rachel was infertile, so that passage above is the one that dictates that Rachel offered her servant for Jacob to make babies with so that Rachel and Jacob could raise them as her own. Jacob went on to have 13 children with Rachel, Leah, Bilhah, and Leah’s servant, Zilpah (it’s complicated).

It makes sense to me, then, that that’s why the Sons of Jacob chose this name. The United States was in an infertility crisis prior to the takeover, and by calling themselves the Sons of Jacob, the men (it is all men, as we’ve seen Commander Waterford have to abandon Serena’s ideas on the show) are sending a clear message — we can change how things are going in the country. We can populate the Earth because we come from a man that was proficient in making children.

But as Commander Waterford says on the show, making things better doesn’t mean making them better for everyone, and though he and his ilk may think that they are changing the world in a good way, they have put down more people than they have picked up.