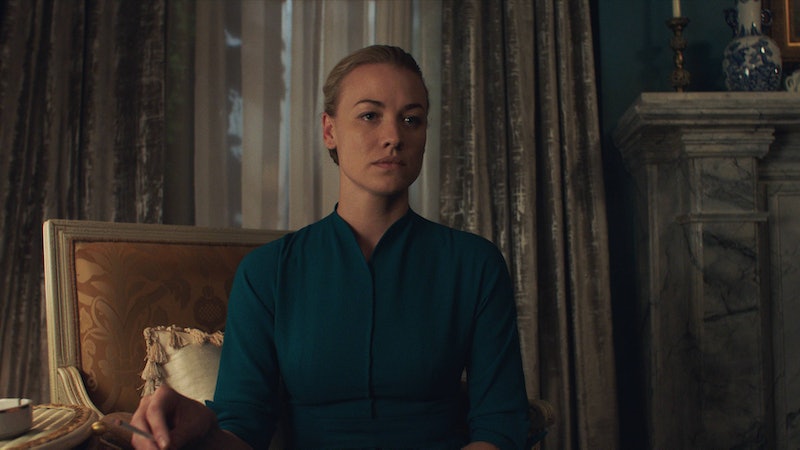 As the war on reproductive rights has deepened, so too has the divide between conservative and liberal women. The right to choose is now an integral tenant of feminist theory: to support it is to champion women's body autonomy, to deny it is to advance their subjugation. This has thrust female pro-life advocates into an uncomfortable chasm — one in which defending their personal beliefs puts them at odds with those whose very freedoms they're fighting to revoke.

In The Handmaid's Tale, Serena Joy is one of these such women. Before the fictional autocracy of Gilead rose to power, she was a televangelist who preached the importance of "domestic feminism" — essentially a roadmap for the restrictive, antiquated society she now finds herself in. She'd given speeches, written a book, influenced policy that worked to put women back in the home. But here, women are not allowed to read her book, or anything else for that matter; her opinions have become defunct. And in the show's sixth episode, "A Woman's Place," viewers learn it was Serena who created her own prison.

Incensed by the many women "abandoning" their families, Serena and her husband, Fred, spearheaded a coup that would revert America to its Puritanical roots. Their proposal espoused some sort of destiny fulfillment. As a degrading environment rendered women increasingly infertile, they sought a return to the gender roles that pervade Biblical scriptures, where women are indentured homemakers, allegiant to their families. It's not clear if Serena had any inkling of where such a concept could lead, but the end result is unequivocal: a misogynistic hierarchy in which men are superior and women are enslaved. Serena included.

Afterward, Serena's requests to take part in policymaking for the very regime she'd helped establish are categorically denied, leaving her subservient to the men she'd so willfully aided in seizing control. By prioritizing her religious loyalties over equality, she'd stripped herself of any stake in her own future. She chose this life.

If that sounds familiar, it should. As Sarah Jones writes for New Republic, Serena's character was modeled after a long line of female fundamentalist celebrities: Phyllis Schlafly, Tammy Faye Bakker, Aimee Semple McPherson. In a more modern context, you could compare Serena to figures like Tomi Lahren, perhaps one of the right's most outspoken young pundits, or Donald Trump's faithful aide, Kellyanne Conway, who defends his statements as if they're divine truths.

You could also look to the scores of women who voted for Trump. Some vocally condemned the blatant sexism that surrounded his campaign, but cast their ballots nonetheless, citing reasons like his vow to pursue an anti-abortion platform, or the appeal of his claim to the Republican party mantle after eight years under Democratic leadership. "You focus on the good," proclaimed one woman in the New York Times.

But Handmaid's Tale shows exactly the problem with "focusing on the good." Disregarding injustices doesn't erase them, it only numbs you to the sting. And by the time that silent pain jolted the women of Gilead awake, a thousand tiny indignities had amassed into something far more crippling. As Jones writes, "the show does more than warn of a possible future: It asks us to consider how we’d end up there." Serena Joy, then, serves as a cautionary figure for the dangers of complying with the patriarchy — an unnerving reminder that it is not just men, but crucially some women, that fuel female oppression. If we're not careful, Serena's circumstances seem to warn, we'll do more than surrender to a patriarchal fate. We'll dig the grave.

More like this
Claire Foy & Rooney Mara Revisit A Devastating Tale In 'Women Talking'
By Bustle UK
Amanda Gorman Shared A Powerful Message On Meghan Markle’s Penultimate Podcast
By Darshita Goyal
Matt Hancock Broke a Major Rule With I’m A Celeb
By El Hunt
The 'Kenan & Kel' Reunion On 'SNL' Took A Dramatic Turn, Thanks To Keke Palmer
By Brad Witter
Get Even More From Bustle — Sign Up For The Newsletter