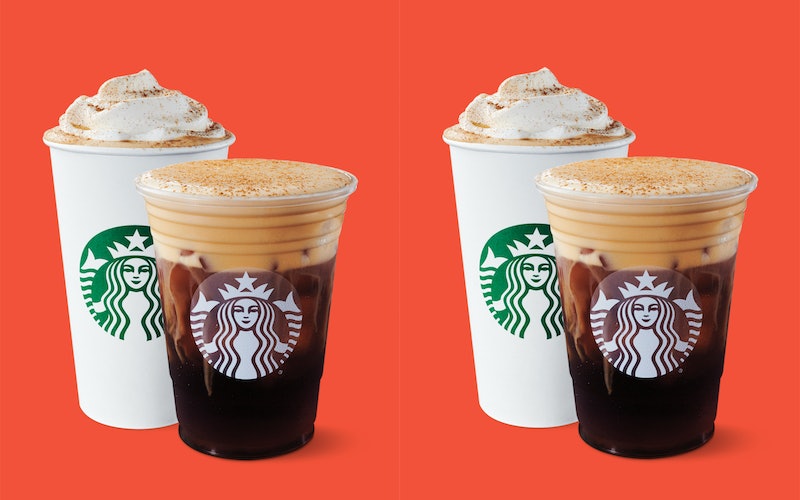 Courtesy of Starbucks; remixed by Bustle
By Emma Lord
Aug. 26, 2019

Starbucks caught wind that you like that Pumpkin Spice Latte drink of theirs, so for the first time in 16 years, the chain introduced another pumpkin coffee drink: Pumpkin Cream Cold Brew, which launches on Tuesday, Aug. 27. Those familiar with the iconic PSL wondering what the Starbucks Pumpkin Cream Cold Brew tastes like can rest assured that this drink isn't just a PSL wannabe or a PSL copycat, but an entirely bold new pumpkin drink of its own. In fact, it's unlike any other drink on the pumpkin market, thanks to one delicious addition: it's topped with a pumpkin cold foam.

We had the opportunity to try the Pumpkin Cream Cold Brew before it officially hit the menu, and the chance to compare it with the PSL firsthand. Whereas the PSL is just as warm, cozy, and sweet as ever, the Pumpkin Cream Cold Brew offers a much more coffee-forward experience. Per Starbucks, it's "made with Starbucks Cold Brew, vanilla, and finished with a pumpkin cream cold foam and a dusting of pumpkin spice topping" — and it's the pumpkin cream cold foam that really and truly makes it unique. Cold foam, which was introduced to Starbucks customers on a larger scale back in 2018, is already well-known for its frothy, soft finish to cold beverages, and now for the first time customers will get to see just how well that texture lends itself to the taste of pumpkin.

The mild sweetness of the Pumpkin Cream Cold Brew makes it ideal for people who love the taste of pumpkin, but might be turned off by the sweetness of the usual PSL; since it is far more coffee-based than the other drink, it's also a bit more practical for people who are at Starbucks for caffeine first, seasonal offerings second. I'd argue that it also pairs a lot better with Starbucks' food offerings for fall, since it balances out the sweetness of them — those will include the iconic Pumpkin Cream Cheese Muffin, as well as the Pumpkin Scone, Pumpkin Spice Madeleines, and Cat Cake Pop. Whereas you might have been more inclined to get those items with a tea or a regular coffee to balance them out, the Pumpkin Cream Cold Brew offers a beverage that still has that fun seasonal twist without your brain going into Total Pumpkin Overload (we are, after all, mere mortals to the PSL gods).

The Pumpkin Cream Cold Brew will launch for a limited time on Aug. 27, along with the return of the Pumpkin Spice Latte and Salted Caramel Mocha. You can also take the opportunity to take advantage of a BOGO deal on Starbucks' handcrafted drinks any size Grande or larger on Thursday, Aug. 29 after 3 p.m. I suggest trying the The Pumpkin Cream Cold Brew sooner rather than later — it may be a "fall" drink, but it is the perfect balm to the end of a hot summer, and will help ease that transition into the prime of PSL season ahead.