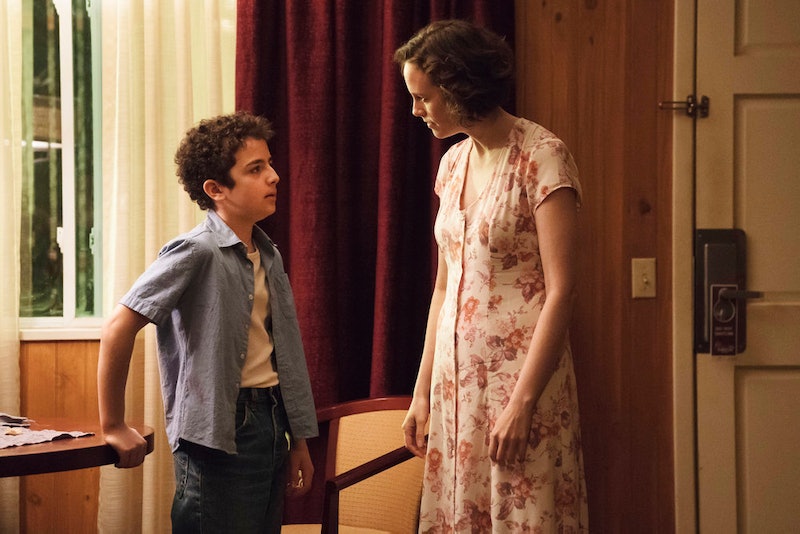 There are more than a questions surrounding the downfall of Julian, the central character in Season 2 of The Sinner. Viewers (and the detectives) recently discovered that the man and woman Julian poisoned were not his parents at all, but rather fellow members of Mosswood Grove, the alternative community where the child grew up, and a place that is definitely hiding more than a few secrets. When Detective Ambrose and Heather went to Mosswood Grove to investigate, they discovered quite a few things that seemed suspicious, including a necklace that used to belong to one of Julian's victims, Bess. But what does The Sinner necklace mean?

The necklace was first spotted by the eagle-eyed Detective Ambrose, who noticed a picture of Bess displayed in Mosswood Grove. She's sporting a very distinctive looking necklace, with a purple gemstone embedded in silver and hung around a black string. Then, as Ambrose and Heather were investigating another part of the communal living spaces, Ambrose noted that another follower, Jess, was wearing the exact same necklace as Bess had been wearing in the photograph.

"You know Bess was wearing a necklace almost exactly like that in the photographs up at the main house," he remarked to Jess. "You're not stealing from the dead, are you?" Jess was quick to deny it. "No, she gave it to me," she told Ambrose.

Nothing suspicious about that, right? It's totally normal for friends to give each other gifts. Detective Ambrose didn't think so. He realized right away how bizarre it was for Bess to have given Jess a necklace before going on a quick vacation to Niagara Falls. "Why would she do that if she was only going to go for a couple of days?" Ambrose asked an increasingly nervous looking Jess. "They weren't coming back, were they?"

Jess was called away by Vera before she could reveal anything else, but the implication is clear. Detective Ambrose had realized that if Bess was giving away her belongings to people in Mosswood Grove, she and Adam were not planning on returning to the community. But this revelation brought up more questions than answers: Why were Adam and Bess leaving Mosswood Grove? Did Vera (who seems to be the leader of the community) know that they were not planning on returning?

But the biggest question of them all is what Bess and Adam were planning on doing with Julian. It was already revealed in the first episode that the couple hadn't packed a bag for him, leading Ambrose and Heather to suspect that maybe they had been plotting to harm the boy in some way. Vera attempted to explain this away to the detectives by saying that the couple had forgotten his bag, and were planning on buying him some things along the road trip, but no one seemed to buy that explanation. Now that it seems that Bess and Adam were planning on leaving forever, it begs the question: why was Julian with them? And did Vera know about it?

Something tells me that nothing in Mosswood Grove gets by Vera. Although she told the detectives that the community doesn't operate in a hierarchical system, it's pretty clear that most of the residents defer to her. She's the woman in charge, whether she's willing to admit it or not. So either Bess and Adam were acting on Vera's orders by taking her son away, or they somehow managed to plot the event behind her back.

Whatever the answer, I trust that Detective Ambrose and Heather will get to the bottom of it... but not too quickly. There's still more than half a season left, after all.