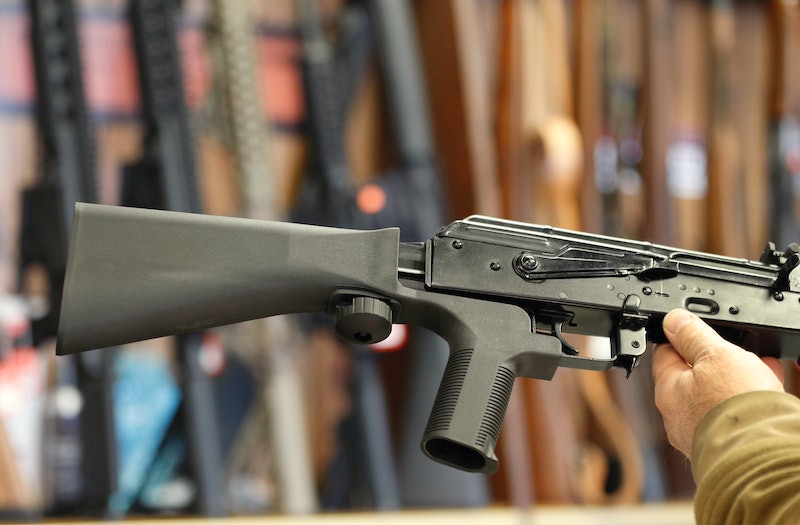 After the shooting in Las Vegas Sunday night, when a man armed with 23 guns and countless rounds of ammunition fired from a hotel window into a crowd of concertgoers and murdered at least 58, the national conversation has predictably turned to the issue of gun control. As America has become accustomed to these kinds of horrific incidents, it has also become accustomed to the ongoing battle between gun control proponents and Second Amendment advocates like the National Rifle Association, along with the lack of action that usually follows. But this time, something might be different, because the NRA has announced its openness to limits on bump stocks, a special attachment the killer had on his rifles.

In 1986, Congress passed the Firearm Owners' Protection Act, which, though it lessened many regulations on weapons, prohibited the sale or ownership of any automatic weapons made after 1986 without a license. But a bump stock, a special mod added to the back of a rifle, changes the way a gun moves. It uses the force of recoil to push the gun's trigger back into the shooter's finger, allowing continuous fire without having to manually squeeze the trigger repeatedly. It's not quite as fast as a fully automatic weapon, but it allows shots at a much higher rate than legal semi-automatic weapons. In effect, bump stocks allow gun owners to adjust a legal semi-automatic rifle to fire like an illegal automatic one.

The Las Vegas shooter had 14 guns outfitted with bump stocks.

With bump stocks becoming a focal point of discussion after the Las Vegas massacre, their sales shot up, as gun owners who wanted them became worried they might not have a chance to buy them in the future. But unlike in previous moments of gun control hopes that got dashed by members of Congress who opposed action, it looks like something might actually happen this time.

Republicans who had previously fought against gun control measures have come out in favor of ending bump stocks, arguing that since they essentially function as a means of getting around the law banning automatic weapons, they shouldn't be legal if automatic weapons are illegal.

"I own a lot of guns, and as a hunter and sportsman, I think that’s our right as Americans, but I don’t understand the use of this bump stock," said Senator John Cornyn (R-TX), the Senate majority whip. "It seems like it’s an obvious area we ought to explore and see if it’s something Congress needs to act on."

The NRA's position in favor of a ban on bump stocks is a striking move for an organization that usually blocks any effort to exert more regulation or limits on the ability of Americans to buy or own weapons. The organization's statement mentioned that, under the Obama administration's control of the Bureau of Alcohol, Tobacco, Firearms, and Explosives, the agency had declined to regulate stocks, though according to BATFE's statement at the time, that was because the agency is not authorized to regulate firearm parts. The NRA calls for regulation of bump stocks to come from the BATFE, not Congress.

We still don't know what will happen to bump stocks, whether the executive branch will regulate them as the NRA suggested, or if Diane Feinstein's proposed bill in the Senate will move forward. But, for the first time in recent politics, the NRA will likely not be grading members of Congress on their adherence to the most expansive understanding of the Second Amendment. While there will certainly be pro-gun representatives who will continue to oppose a bump stock ban, it will certainly be easier for those on the fence to come over when they know the NRA won't attack them for it.