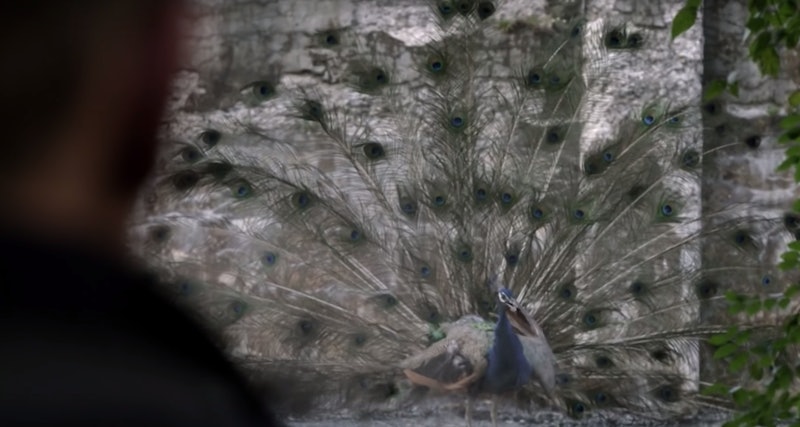 Spoilers ahead for Manifest Season 2, Episode 4. Ben Stone isn't ready to give up and accept the death date on Manifest. But he may have everything all wrong, because there are so many signs that point to the passengers achieving immortality — not dying. One of the big clues that Episode 4 gave was the reappearance of the peacock symbol on Manifest.

Ben saw a vision of the animal back in Season 1, and now the peacock symbol has appeared again — this time inscribed on the back of a compass found in a safety deposit box numbered 6224. It can't be a coincidence that those numbers correlate to the Flight 828 passengers' supposed "death date" of June 2, 2024. The compass belonged to one of the passengers' grandfathers who used it to stop a bullet while he was at war. And just like the compass saved him, the peacock symbolism could mean the passengers are also saved.

The peacock is a symbol of immortality, because people once believed that the flesh of a peacock didn't decay after death. Saint Augustine supposedly tested that theory and wrote in City of God, "A year later, it was still the same, except that it was a little more shriveled, and drier." In addition to being a symbol of eternal life, in Christianity the peacock also represents resurrection since they molt their beautiful feathers and grow new ones. That would lend itself to the theory that the passengers did all die on the plane, but they were then reborn for a new mission on earth overseen by God and his "all-seeing eye" reflected on the peacock's feathers. This show has many religious undertones, so the peacock's meaning in religion seems too spot on to not be important.

Additionally, Olive mentioned in Season 1 that peacocks were messengers for the Goddess Juno. Ben was instantly intrigued and wanted her to tell him more, but they were cut off by Grace coming in and asking about another pressing matter. They never returned to the conversation, but they probably should now that the peacock has appeared again. Juno is the goddess of childbirth, which means the peacock could also be related to Grace's pregnancy. We know that the baby is Ben's, and Grace is receiving callings now because of the baby. That means the child is already powerful and it could be the key to all of this.

It's worth noting that Adrian, the passenger who started his own religion upon returning also recently spoke of the Flight 828-ers living on for decades. Perhaps he meant their message, but it could be literal if the idea of immortality is on the table. If Ben is able to unlock whatever the answer to the death date is, the solution could potentially present the passengers with the ability to never die. If that's the "holy grail" the Major is after, that would make so much sense. Of course the government would be interested in a cure for death.

There are still a lot of pieces of the puzzle to fill in, but if Ben works quickly, he could solve the death date problem in time to save Zeke — whose death date is in a handful of months. Of course, if the solution to dying is to live forever, that's a whole choice in its own that the passengers and Zeke will have to consider carefully. Knowing when you're going to die is one thing, but knowing you're never going to die is something else entirely.