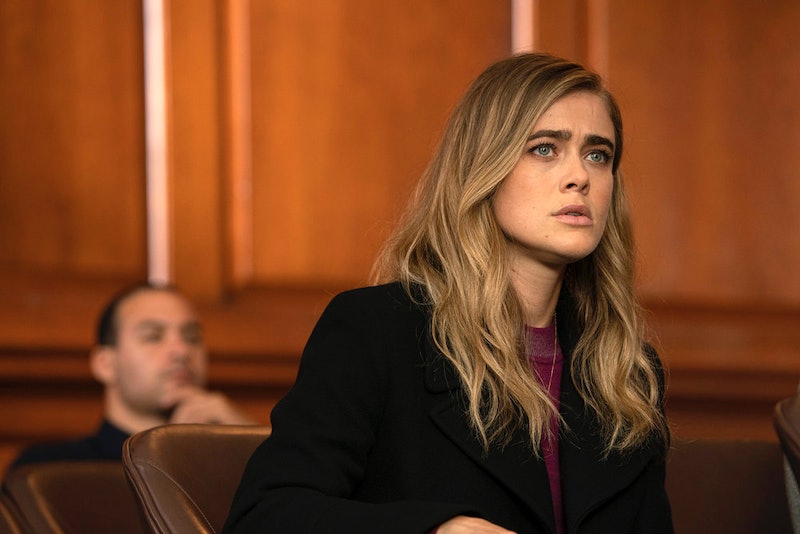 Manifest has only aired one episode of Season 2, and fans are already brimming with speculation about where the show is headed. It helps that the series was off the air for a year — so viewers had a lot of time to rewatch and think about what could happen next. That's why these Manifest Season 2 theories are so well-crafted and also quite feasible.

Fans have been right with their theories about this show before. In Season 1, after NSA director Robert Vance seemingly died in an explosion while investigating the experimentation on Flight 828 passengers, fans flooded Reddit, Twitter, and message boards with their theories about how there was no way that Vance was actually dead. And, lo and behold, they were right.

At the end of the Season 2 premiere, Vance revealed to Ben Stone that he was still alive and had somehow survived the deadly explosion. How's that for a plot twist? Well, it was a little less twisty to all the viewers who had been predicting it for over a year.

If the fans were spot on about Vance, who's to say they're not also right about all of these other Manifest theories?

Reddit user Brimarcink speculated that there is a very specific reason as to why each of the people who have come back did so — and it relates to the four classical elements: air, earth, water, and fire. The plane passengers represent air, Zeke (who was stuck in a cave) represents earth, Griffin (whose truck fell into the river) represents water, and Vance in his explosion would represent fire.

Just because Vance is alive now doesn't mean that he didn't die. That explosion could have very well launched the same sort of near-death time travel situation that the 828 passengers, Zeke, and Griffin all experienced in Season 1. If Vance time traveled forward to now, he would have his own death date like the passengers — only his would be coming up in a matter of months, not years.

Who The Baby's Father Is

Manifest viewers have a ton of different theories related to Grace's pregnancy. One really intriguing one from Reddit user lionheart07 is that Grace was pregnant before the flight but then the fetus disappeared while Ben and the other passengers were gone. When Flight 828 re-emerged, Grace became pregnant again. If the baby was conceived before the flight, would it have the same death date as the others?

Griffin May Not Have Died Because Of A Death Date

The whole of Season 2 hinges on this idea that the passengers have a "death date" and that they will die in five and a half years — the exact amount of time the plane was gone. This theory was seemingly backed up by Griffin's death. He died by drowning on dry land after the exact amount of time he spent submerged was up. But it's worth noting that when he died, Griffin was about to reveal what the callings were to the general public. Creator Jeff Rake told TV Guide that it's important to pay attention to that dichotomy.

"Griffin used the calling for evil and then dropped dead. So, a core fundamental question in Season 2 and beyond is what is the cause and effect there? Did Griffin die because he used the Callings for evil or did Griffin die because he had been back for 82 hours and 8 minutes and that's the amount of time he had regardless of the actions that he took? Those are two very different interpretations and there are significant consequences for both."

Ben and Michaela and many of the other passengers (and Zeke who also has the callings) have mostly been using them for good to help other people. Are the callings some sort of test or experiment to determine who gets to live after getting a second chance at life, as twitter user Aliciadfortner suggested? By that measure, most of the Flight 828 passengers would perhaps survive past their death date if they've significantly changed their life to do good upon returning.

The 828 Passengers May Have Traveled Into The Future

TV Fanatic user Kate227 posited the theory that the passengers traveled to the future and already saw how everything plays out. The callings are then warnings from their future selves. TV Fanatic pointed out that Ben says in the trailer, "the possibility that all of this has happened before, this changes everything," which gives further credence to this theory.

Fiona & The Pilot Could Return

Like with Vance, fans are not convinced that the pilot and Fiona's flight was shot down when the pilot attempted to recreate the time jump. Perhaps he really did get everything just right and he and Fiona are in the same time vortex that the 828 passengers were. Before he left, the pilot said, "see you in 2024," because he assumed that the time jump would take him another five and a half years into the future. However, he was seemingly flying a much smaller plane than the large 828 passenger plane. Maybe he won't make it five and a half years and he and Fiona will return much sooner and with a new death date.

Other Time Travelers May Be Out There

Zeke, Griffin, and possibly Vance proved that this time traveling isn't specific to just the plane passengers. Maybe there's even more people out there who have experienced this time jump who can help the passengers fill in the blanks. Rake did promise TV Guide that we'd meet a lot of new faces in Season 2. Perhaps another time traveler will be among them.

We could be waiting until 2024 when the show's six-year plan wraps up to get any real answers. But, in the meantime, fans will keep theorizing away and hoping to stumble on the truth.